Legends in the Dark 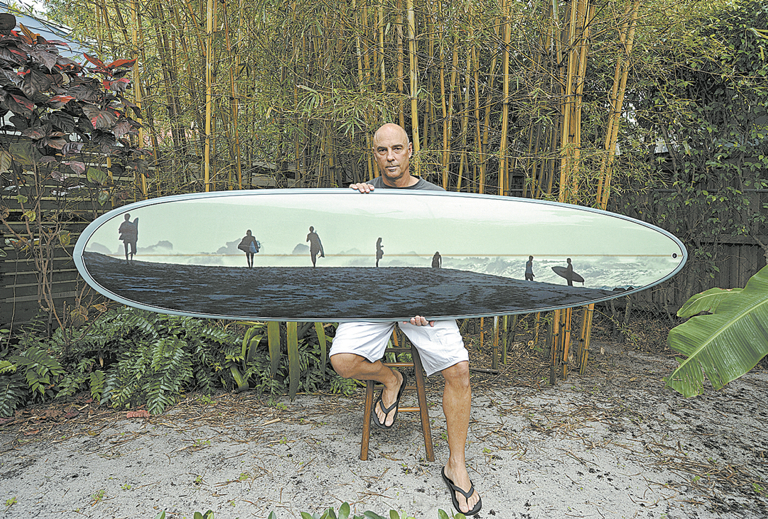 “Legends in the Dark” was a name given to an 8′ 6” mini-noserider that I built in January of this year. I don’t usually give names to boards that I shape unless it’s by special order or for a longtime customer who might find it interesting.  This board was both special and interesting. The board was made for legendary surf photographer, Tony Arruza, to be added to his “fifteen by fifteen” surfboard art project.

In 2010, Tony had a custom ride made with one of his surf images laminated to the board. The process was done by enlarging a photograph onto a thin layer of vinyl. That image was then adhered to the board with epoxy resin during the glassing stage.

The finished board turned out so incredibly cool that it got him thinking. What about a project that would pay tribute to both the hand craftsmanship involved in building a surfboard and his nearly four decades of artistic photography? As the idea evolved, he decided he would commission fifteen boards by fifteen shapers and have the exhibition displayed in beachside galleries on both the US east and west coast.

Having had seven of these boards built in his home state of Florida, he traveled to Puerto Rico to oversee board number eight before venturing to Dare County to begin the evolution of board number nine.

While being included in this small group of craftsmen was definitely an honor, the process was a little out of my wheelhouse. The fact of the matter is, I spend most of my working hours in a small dimly lit room, alone, focused on the task at hand. In surfboard construction there is no margin of error. Perfect is good enough. So trying to retain that level of expertise with someone walking around the shaping rack snapping photographs and lights flashing and popping took a little adjustment.

It was a good thing Tony had been through the ordeal a few times already and knew how to get what he needed without getting “dusted” by the foam coming out of the planer. He even set up a Go-Pro video camera on an elevated shelf to catch a bird’s eye view from above.

Once the shape was completed, we set off to the WRV factory across the Wright Memorial Bridge, in Currituck to begin the glassing stage. Master laminator Dave Rhode took one look at the material he had to work with and dove right into the job. He had the print adhered to the board in less than twenty minutes, and decided on a battleship grey pigmented resin color to complement the darker hues of the beach scene in the image.

These colors were then set apart before the glossing stage by Gary Rice. Not only did he roll out perfect double pin-lines, but he offset the colors to match the lighter and darker contrast from the right-side to the left-side.

To be honest, the photos do not do this board justice. She should really been seen by the naked eye to appreciate the skill and time that went into her assembly. Hopefully, the exhibition will make a stop on the Outer Banks while on its way up the eastern seaboard.

With an average of three boards a year being completed for this project, it will be a while before Tony is on the road with this accumulation of drool inducing boards. Until that happens you can follow the update on his web blog at www.arruza.com/ to see the designs of the next six board builders.