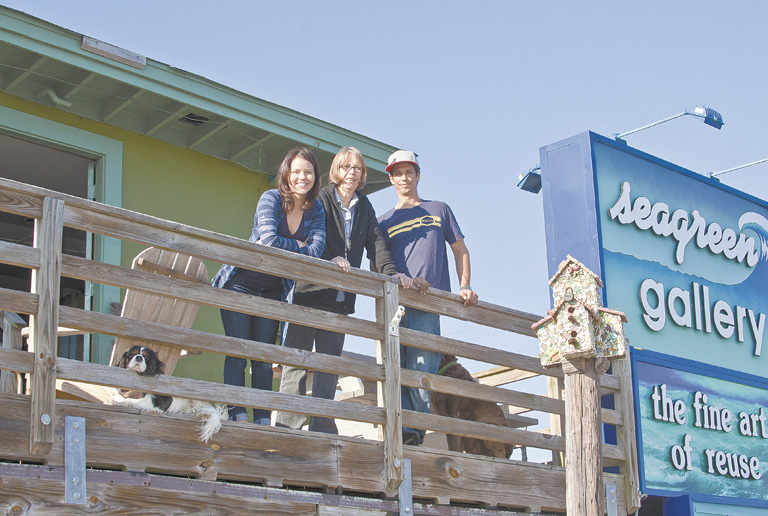 Owner Susan Evans, and her family live above Seagreen Gallery in Nags Head.

I was the man upstairs.

When I first came to the Outer Banks I lived above Glenn Eure’s Ghost Fleet Gallery in Nags Head. A one bedroom, two story apartment, it was spacious beyond its size; a little bit quirky, certainly unique, it was the perfect entry into Outer Banks life.

Glenn, who is every bit as quirky and unique as his building, took great delight in walking up to people at one of the many receptions he and his wife, Pat, hosted, and—in a slightly ominous voice pitched a bit lower than usual—would ask, “Would you like to meet the man upstairs?” Followed quickly by an introduction. 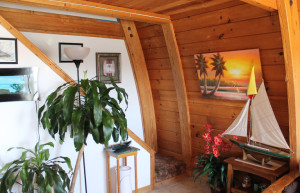 Above the Ghost Fleet Gallery. Curved walls and two floors.

When artist Susan Evans, owner of Seagreen Gallery in Nags Head, had a chance to tour the old Gray’s Department store with her realtor, magic happened. “I just knew the moment I walked in, it was perfect,” she said.

Evans is an artist who creates art through reuse—turning shards of old glass into a mirror frame or a vintage button bouquet looking like a flower arrangement in an antique bottle. Returning the old Gray’s building to a its original purpose as a retail store just seemed to be a part of the draw of the old building. “So many people say, ‘I bought my bathing suit here’ or ‘I bought my shoes here,’” Evans says. “There are so many stories to talk about.”

The Gray family lived in the apartment, a rambling three bedroom home in the front with a two bedroom apartment in the back. It is convenient living there; it certainly saves time and money; but there’s more to it than that, according to Evans. “It’s fantastic to be right in the middle of things,” she says. “What I love is sitting in the living room from very early in the morning and see the really in-shape people go jogging by,” she goes on to say. “Then about 11, the not quite as in-shape come by.”

Their next door neighbor is Surfin’ Spoon, the frozen yogurt shop owned by Jesse and Whitney Hines. “Our porch looks out over the parking lot,” Evans says. “It’s a really interesting combination with Surfin’ Spoon. It’s just a fun young crowd.”

To see her business, Susan Evans has to actually walk downstairs—Leonard Logan, owner of Elizabeth’s Café, on the other hand, just has to walk out his front door.

The café, located in Scarborough Faire in Duck is a reminder that elegance and fine dining are things to be treasured. Leonard, outgoing, gregarious with a wonderful sense of humor is the perfect host for Elizabeth’s, and the place lights up when he enters.

The restaurant, named in honor of his then wife, opened in 1989 and has lasted longer than the marriage.

At that time there were three apartments above the businesses in Scarborough Faire—one above Gray’s Department Store, another at Island Books and the apartment Leonard uses now, although strictly speaking it’s not an apartment. “It’s listed as an office,” Leonard says. “It’s one bedroom with an office.”

When he first opened the restaurant, he and his wife were living along the sound and after a long day, the ride home could be a problem. “She (Elizabeth) had run off the road near the house one night,” Leonard says. “Being in the office just made it easier.”

Especially in Leonard’s case, much easier. Following a full career practicing law in Washington, D.C., his new commute is to be treasured. “After all the lengthy commutes I used to do, it was just a blessing to just be able to walk out the door and be at work.”

Cutting down on commuting time was the plan when the Hess family put an apartment above Capt’n Franks Hot Dogs. The Kitty Hawk landmark has been in business more than 35 years and soon after opening the apartment was tacked on to the top of the building. “Originally it was added on for the family, to stay when they were working in the summer time,” Harvey Hess III, general manager of the restaurant, says. “It’s evolved over the years and it was more of an employee apartment. But no one is living up there now, though.”

“Everybody in my family has lived up there,” he says. He laughs and adds, “If the walls could talk, there’s been people living up there for 30 years or so.”

There are, of course, other examples of Outer Banks businesses coupled with an apartment. We couldn’t get to all of them, and if there are tales to be told, we would love to hear them. Send us an email at editor@northbeachsun.com and we’ll share your story.