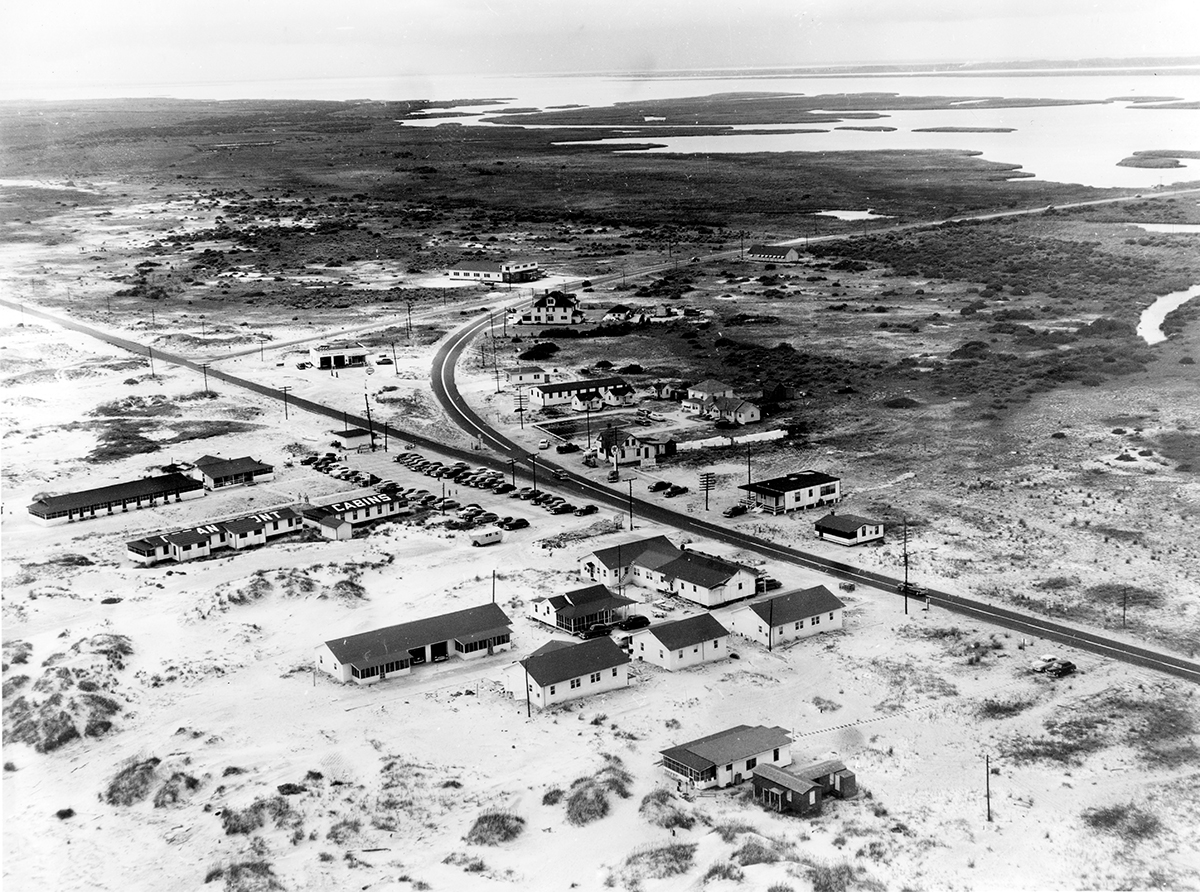 At one time, it was simply referred to as “the end of the road”—a sandy intersection where several roads merged together at the southern end of Nags Head.

It was long before milepost markers were placed in the sandy soil to put this section of town on the map at 16.5. To go any farther south meant that motorists would have to pull over at Alexander Midgett’s filling station to let the air out of their tires.

From there, a dirt road led to Oregon Inlet and to the ferry shuttle Toby Tillett operated that connected the northern beach to Hatteras Island.

The time was the early 1930s and the filling station was about the only thing that existed at “the end of the road,” which was soon given the more official title of the Junction to give a name to where U.S. 158, U.S. 64 and N.C. 12 converged.

But the story of how this part of Nags Head became what it is today begins at the filling station way back when the area finally received the name Whalebone Junction. The words conjure up images of a coastal version of the wild, wild west, and, in many ways, in the beginning it was.

Whale Bones Come to the Junction

Butch Midgett tells the story best—the one about how his grandfather is responsible for what this section of Nags Head is called today. 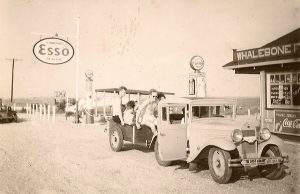 A group of The Lost Colony cast members fill up at the gas station at Whalebone Junction, circa 1948. Photo courtesy of the Outer Banks History Center.

The young Midgett likes to tell the tale of his Junction roots to the customers who come into his toy store Pirates & Pixies that sits right across the street from where Midgett’s Esso station operated more than 75 years ago.

“I like to tell everyone just how local I am,” he says, adding tidbits of family stories he’s heard over the years, like the fact that the yucca plants that can be seen growing wild around the Junction came from his grandmother’s plants and that his grandfather lost the lower part of his leg while shorebird hunting.

His favorite though is the story about how the U.S. Coast Guard would come and bang on the side of his grandparents’ house when a hurricane was coming so they could take them off the island.

Those family stories are not, however, what his grandfather is best known for on these islands. It’s the whale bones.

The filling station was always just a pit stop for cars heading south or north, but when Midgett ran across some washed up old whale bones on Pea Island one day, he and his station would go down in Outer Banks history.

“My dad tells the story of how they had to beg and bribe the ferry operators to let them carry those bones across because they smelled so bad,” Midgett says. “They had to scrub them all down real well.”

Once back at the station, Alexander put the bones together to make up a 72-foot whale skeleton at the 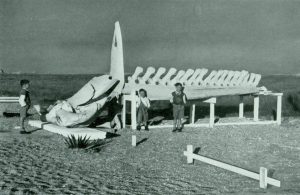 Children pose in front of the whale bones that gave the Junction its name. Photo courtesy of the Outer Banks History Center.

edge of his property to lure in potential customers.

“It was a retail move,” says Midgett. “He thought if he put the whale bones out, people would get out of their cars and would be more likely to go into the store. It was marketing in its most primal form.”

The gas station, which not surprisingly was renamed Whalebone Service Station, eventually burned down and Butch says no one knows exactly what happened to the whale bones. But the marketing gimmick of Alexander Midgett marked the beginning of a place called Whalebone Junction, a section carved out of the town lines that for decades would offer visitors and residents a sense of place—whether they are stocking up for a beach day at Cahoon’s Market, filling up at Sam & Omie’s before a morning of fishing at the pier or catching some surf after a long day of work.

More than Just a Junction

It didn’t take long before Whalebone Junction became what seemed like its own version of a small town. The still-popular Sam & Omie’s Restaurant (first called Sambo’s) was constructed in 1936 with 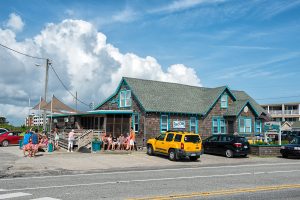 Patrons wait for a table outside of Sam & Omie’s. Photo by Patti Harrell Photography.

pieces of wood that washed up from the ocean. It also served as the site of a charter boat booking service run by owner Sambo Tillett for many years. His son, Capt. Omie Tillett, was later added to the restaurant’s name.

Not long after, in 1939, the original Jennette’s Pier was erected, followed by a dance hall and bar called The Jokers Three that later served as a Shrine Club and eventually Holy Trinity Catholic Church. Cahoon’s Cottage Court and Market were both already up and running, along with Owens’ Restaurant.

That’s A Burger, the island’s first drive-up burger joint opened in the ’50s, giving hungry beach goers a place to grab a quick lunch. It changed hands a few times and was renamed Dune Burger, but is also still at the Junction today. 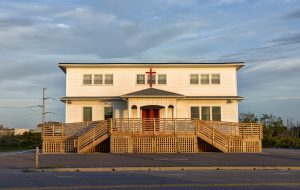 1951, and the Herbert C. Bonner Bridge was built in 1963. In the 1970s, Jim Vaughn moved into a small house next to the church and opened up Whalebone Surf Shop, naming it after the Junction.

During all this growth, a small community of locals was growing whose connection to the Junction would run deep over the years as they either grew up at the crossroads, ran a business there are spent long afternoons at the pier. In years to come, they would be instrumental in resisting development pressures and in the midst of change, struggle to keep the original spirit of Whalebone Junction alive.

Daily Life at the Junction

Renee Cahoon was six years old when her parents, Dot and Ray, bought Cahoon’s Cottage Court and Market, built by Charles Evans in the late 1940s.

The year was 1962 and Cahoon remembers kids roaming the beach during the summer months. “The problems of today didn’t exist, and no one worried about us. There were lots of open spaces back then.” 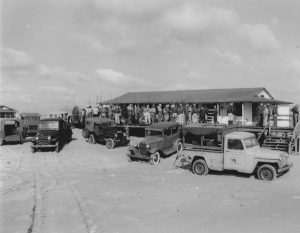 The original Jennette’s Pier bustling with activity during the Nags Head Surf Fishing Tournament, circa 1952. Photo courtesy of the Outer Banks History Center.

Cahoon remembers the scene at that time. That’s A Burger was across N.C. 12, and before that an old tire place was at the spot. The road to Hatteras had been built, but the bridge came just a year or two after she arrived. She remember The Jokers Three, and also what she refers to as the “real” Jennette’s Pier, which has been replaced by the N.C. Aquarium’s full-service educational pier.

Cahoon’s family, originally from Swan Quarter, would spend the summers at Whalebone Junction operating the business and then return home. “Everything died at Labor Day. There was no off-season.”

Vaughn remembers those days as well. He said he remembers how the beach emptied out the day after Labor Day. “There would be double overhead waves and I couldn’t find anyone to surf with out at Jennette’s Pier.”

Vaughn recalls Whalebone Junction in its heyday as a place where everyone knew everyone else. He’d have happy hour at his surf shop every afternoon and was open until sundown because there were no 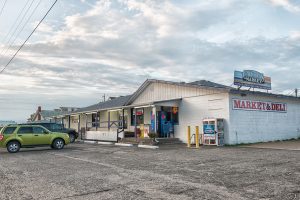 Cahoon’s Market has stood the test of time at Whalebone Junction. Photo by Patti Harrell Photography.

streetlights at the time. He also remembers with a smile how he would literally chase customers out of the store when he got word that the waves were good down on Hatteras Island.

Butch Midgett remembers the same community feel that was woven into daily life at Whalebone Junction. “We’d grab a sandwich at That’s a Burger and head down to the beach. We’d eat under the pier and we had no air-conditioning, so we’d just all stay down at the beach.”

During those days, he recalls, people would surf on whatever they could find, even pieces of plywood.

While things changed over the years, many things remained quite the same as this place has continued to gain a very unique identity of its own.

Wally Gray first started leasing the filling station at Whalebone Junction in 1976 and in 2000 he purchased the property now known as Whalebone Citgo. It took him a long time to finally acquire it, but he says, “I’m here now and I’m not going anywhere.” 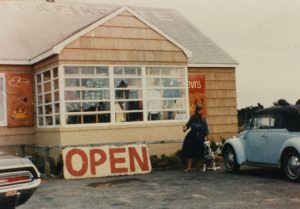 Like Gray’s station, longstanding businesses—what town planners refer to as “legacy establishments” —have contributed to Whalebone Junction’s lasting identity that sets it apart from other areas of town.

“Things have changed way too much,” says Gray, but in the same breath he can rattle off a list of things that have remained the same—his gas station, Owens’ Restaurant, the Sea Foam, Sam & Omie’s, Dune Burger and Cahoon’s.

“We’ve all worked hard to stay here and we fight to survive,” says Cahoon, whose cottage court and market, like the other legacy establishments at Whalebone Junction, haven’t changed much over the years. Even as businesses change hands, owners work hard to keep the character of the original businesses and structures.

Still, she said, the Junction has lost a lot of its character. Old motels such as the Vivianna and Manor have been replaced with houses, and zoning laws make it difficult for non-conforming businesses to upgrade. “Everyone has had to work hard to maintain,” Cahoon says.

Considered by many a town model for the future of beach road development, a municipal park now sits on the west side of N.C. 12 behind Dune Burger. The park includes a playground, shaded picnic 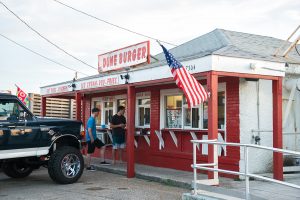 Residents and business owners at the Junction are now working with town leaders as part of the FOCUS Nags Head Initiative to determine a future vision for the area. Nags Head Principal Planner Holly White said there’s a strong push for it to continue to be a destination where people can visit, park their cars and enjoy exploring on foot.

“We are going to continue to thrive,” says Cahoon of the Junction as she sits outside Cahoon’s Market on a sunny Monday morning in July. All around her, visitors and locals are beginning their week just as they did all those years ago when the whale bones sat outside Alexander Midgett’s filling station.

One thing is certain about this unique area of Nags Head. As it and the locals who call it home move into the future, there will always be bits of the past that can been seen and felt while spending some time at this sandy, windswept crossroads called Whalebone Junction.