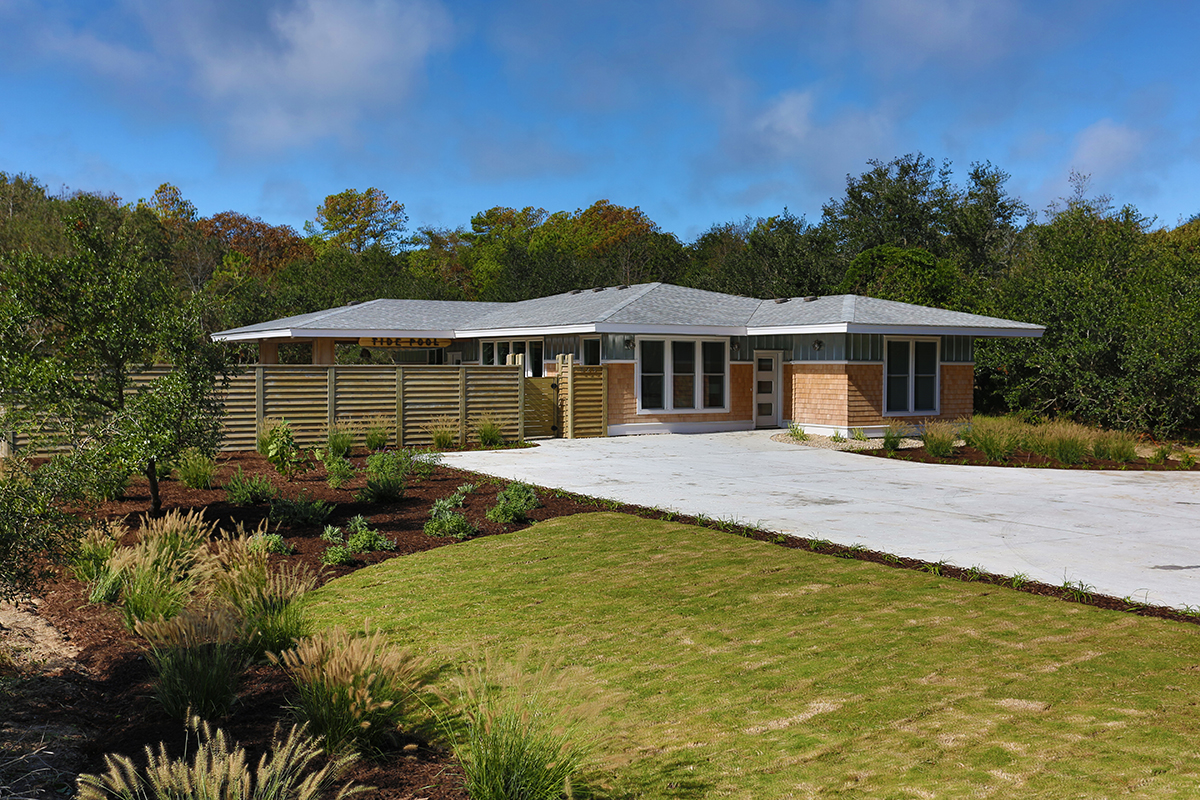 Gray and Ali Berryman’s cozy bungalow is nestled away in Southern Shores.

The small house nestled among the live oaks of the maritime forest at 223 Wax Myrtle Trail isn’t your typical Southern Shores rental property. But “typical” is not what owners Gray and Ali Berryman ever intended when they started drawing up plans two and a half years ago.

Gray, a real estate broker with Carolina Designs, wanted to reinvent the flat top with a more modern, contemporary look. He also wanted to go small. Ali, a massage therapist and mother of four, wanted it decorated and designed to a tee. They both wanted it to be handicap-friendly, fun for families, and to have a great outdoor space.

When they realized a flat top roof wasn’t feasible, what the Berrymans ended up with was a cozy California-style bungalow that comes in at 1,560 square feet and has three bedrooms and two baths. Built by Olin Finch and Marc Murray and furnished by Amy Crisler of Urban Cottage, it is infused with character, detail and charm at every turn. 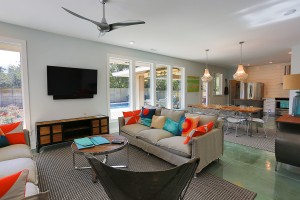 A wide view of the comfortably chic living space.

“I really wanted it to be the first flat top to be built here in the last 50 years,” says Gray. “But we learned soon enough that the building codes would make that difficult, and there were concerns surrounding condensation and leaking.”

Instead, they opted for a low-pitch roof with 4-foot overhangs and metal siding for a long lifespan. “There’s no paint on the house except for the front door, so in theory the exterior is maintenance free.”

The overhangs, says Gray, are an added green feature that help with energy conservation year round.

Inside, the Berryman’s one-story bungalow features larger doorways, easily moveable furniture, a kitchen island on wheels and kitchen appliances that are at wheelchair level. Open shelving in the kitchen was custom built on site.

“We wanted to put something on the market for people who don’t want to or can’t rent an oceanfront with an elevator,” says Gray, who moved to the Outer Banks with Ali in 2003. They now live in Southern Shores not far from the property.

While Gray describes the floor plan as a version of the “tried and true” beach box that has been built a thousand times here on the Outer Banks, there’s plenty that makes this house stand out. 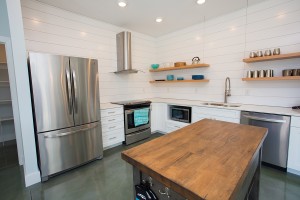 The floors consist of reflector epoxy applied directly to concrete, which brings a sleek, clean look to the home. Salvaged cargo light fixtures from

decommissioned ships purchased from Big Ship Salvage in South Carolina hang from the ceilings. And the décor is a twist between a California beach shack and an African safari, with Ali getting a few of her ideas from some photos she saw of an African resort. She followed through with choosing artwork, bedding and other accessories for the home to create a style all its own.

“Ali worked really hard to get the right pieces of art,” says Gray, adding that several of the pieces that adorn the walls are by local artist Meg Rubino.

Another quirky detail that makes this house special? The dining room table comes from an oak tree that fell in Kitty Hawk during a hurricane. Matt Steede of Kitty Hawk transformed it into a beautiful table to share meals on.

The Berrymans’ bungalow sits on just under half an acre of land and the outside is designed to have a simple courtyard effect. A fenced-in yard creates privacy so guests can enjoy the solitude of the maritime forest while swimming in the pool or hanging out under the covered deck. The deck also has 4-foot eaves, providing protection from the sun and the rain. The concrete that makes up the decking is treated with rock salt to give texture. 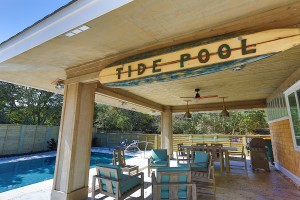 A private pool area is perfect for long summer days.

Gray refurbished one of his old surfboards and made it into a house sign that is anchored to the eaves. “I rode the board once and it rides terribly, so I stripped it and refinished it,” says Gray. The surfboard sign reads Tide Pool.

Now, the Berrymans are focusing on getting their first few rentals under their belt.

“We are very familiar with how the rental market works,” says Gray, adding that his clients could also use the house while in town looking at properties. And with four kids, the Berrymans have plenty of visits from the grandparents. “The home is perfect for them to come and visit for an extended stay.”

Gray still likes to toy with the idea of building a tiny house one day—say about 600 square feet. But in Southern Shores, there’s a 1,000-square-foot minimum. “Maybe we’ll build one in the four-wheel drive area of Carova one day.”

But for now, Gray and Ali are excited to add this unique space to the rental market.