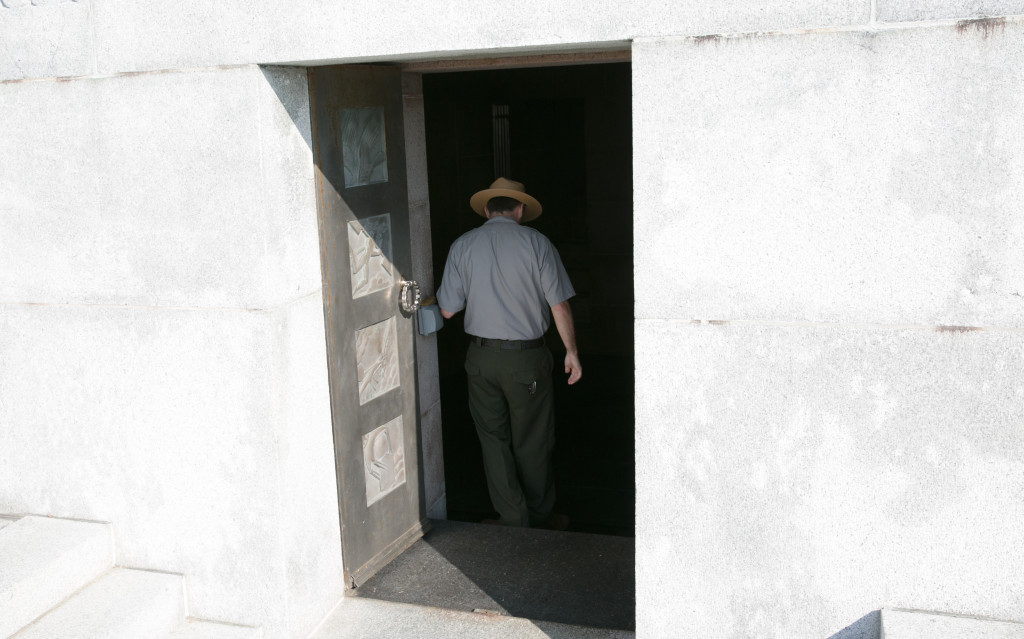 Sitting atop a 90-foot hill and rising another 60-feet above that, the Wright Brothers National Memorial is an iconic symbol of the Outer Banks. Anyone who has been on the Outer Banks for any length of time knows about it and probably uses it to navigate when they are in the vicinity of Kill Devil Hills.

The trek to the top of the dune is well known as a lung busting, quad exhausting climb, but the view from the top on a clear day is worth every burned calorie and cramping muscle.

Facing south and inscribed over the door at the base of the monument are the words, “In commemoration of the conquest of the air.” Well, it almost says that. As it turns out, whoever was blocking the letters didn’t quite get the measurements right and the second “m” in commemoration and “e” form an odd letter and the “h” and “e” in the second “the” create a hybrid “he”.

But the details on the outside are what everyone gets to see. What we came to discover is what lies behind the nickel and stainless steel doors.

We were able to meet up with Supervisory Park Ranger Josh Boles who brought a set of keys and an incredible amount of knowledge.

At one time the monument was the visitor’s center. The original entrance to the Wright Brothers National Memorial was on Colington Road and can still be seen. “Those pillars that sort of look like old Cold War era pillars, that was the original entrance,” Josh says.

Behind the doors is a room that has granite walls and a black granite floor. It leaks—that is very clear. There are water marks on the granite and marks on the floor from the cleanup following heavy rains the week before we came. “They put the drain on the uphill slope,” Josh tells us.It seems a somewhat drab little room but as he speaks, Josh brings the history of the monument alive.

On each side of the door there are small alcoves about 6-feet above the floor. “These two little alcoves were the original location of the Wilbur and Orville busts. When this got closed, they got moved outside,” he tells us, indicating the busts on either side of the stairs leading to the monument.

During its life as the visitor’s center, travelers would have been greeted by an attendant as they came through the entrance. “There would have been a very traditional little table that would have had a map on it that showed you the grounds,” Josh says.

Stairs lead up to the top of the tower at the back of the room. Narrow, steep and clearly not made to any code in existence, it is hard to imagine that at one time the public would have been allowed to climb them.

Yet they were used regularly by visitors to the Wright Brothers National Memorial, and like the tourists who would have found their way here 60 or 70 years ago, we also climbed to the top.

The view is magnificent. At 150-feet it is the highest point around, and beneath us the flight path of the Wright Brothers’ first flight stands out in miniature detail. Birds glided below us, and as we watched, a plane swooped in and did a touch-and-go landing at the airstrip.

There is graffiti in the grout of the stone, clearly seen as we descend—in its own way a remarkable historic testament and part of a narrative that is still unfolding.

It is, Josh tells me, perhaps his underlying reason for becoming part of the National Park Service. “I feel it’s my duty to protect and preserve the stories so they will continue to be told,” he says.