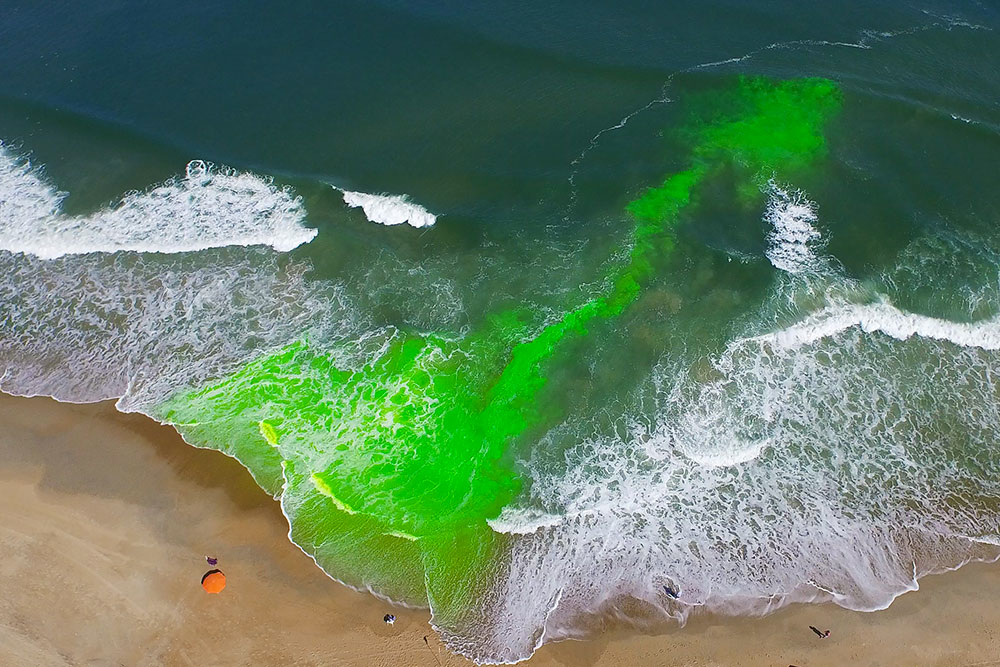 The green dye was released at the shore break and was then pulled out by a rip current.

It took a bright green dye dumped into the ocean to capture the public’s attention and illustrate what a rip current looks like and how powerful it can be.

In September, Kill Devil Hills Ocean Rescue Supervisor Dave Elder, John McCord of the UNC Coastal Studies Institute and Benny Baldwin of Baldwin Video Productions found the perfect rip current just off the beach in Kill Devil Hills. They released green dye in the water and McCord started filming from a drone up above.

The path the dye takes as it shoots out to sea proves that much of what we think we know about rip currents may not be exactly right.

A quick glance at the pattern of the dye shows it going almost straight out to sea, with a slight tilt to the south. That’s not what those familiar rip current posters illustrate. “The standard rip current that you look at, that you see in one of those pictures is a mushroom cloud. That dates back to the 50s,” says Elder. “That’s not what’s in the picture.”

Elder has been a lifeguard on Outer Banks beaches for 20 years and over that time he’s developed a very good sense of when and where rip currents will occur. As he gained more knowledge of rip currents, he also began to understand that people he thought would know the most about them really didn’t know much at all—in fact, it seems there was relatively little data on how to predict rip currents in particular localities.

That may be changing, and the green dye is part of the story.

Working with Dr. Greg Dusek of the National Oceanic and Atmospheric Administration (NOAA), Elder is developing a more accurate method to predict rip currents. “There is a great deal of interest because we are taking something that is a known safety issue, and establishing that it could possibly have a level of predictability.”

To publicize their efforts, NOAA is working with the UNC Coastal Studies Institute to get the word out. “This footage will be part of a national PSA (public service announcement) we’re trying to put together,” McCord says.

To Elder, who has been the driving force behind the rip current studies, the PSA is the key to improving swimmer safety. “Rip current ignorance is the issue,” he says. “We have more pictures of Nessie (Loch Ness monster) than we do of rip currents.”

McCord wants beachgoers to be able to identify the slight differences in the water where rip currents are present. “They’re easy to identify from the air, but more subtle from the ground. People like Dave Elder can spot them easily. We’re hoping the imagery will help people more easily identify rips before they get in them.”

“Sometimes, 80, 90 maybe even 95% of my rescues are rip currents,” says Elder, adding that panic may be the greatest risk factor for swimmers. “A rip current will pull you out, not under.”

There are a number of steps Elder takes to alert people to where rip currents are happening. His lifeguard crew marks active areas as they identify them, and they talk regularly to beachgoers about the dangers.

As a lifeguard, Elder believes prevention is the key. “I have two jobs,” he says. “Number one is prevention. Number two is rescue. If I do number one really, really well, number two isn’t quite as necessary.”