Bringing Light to the Gardens 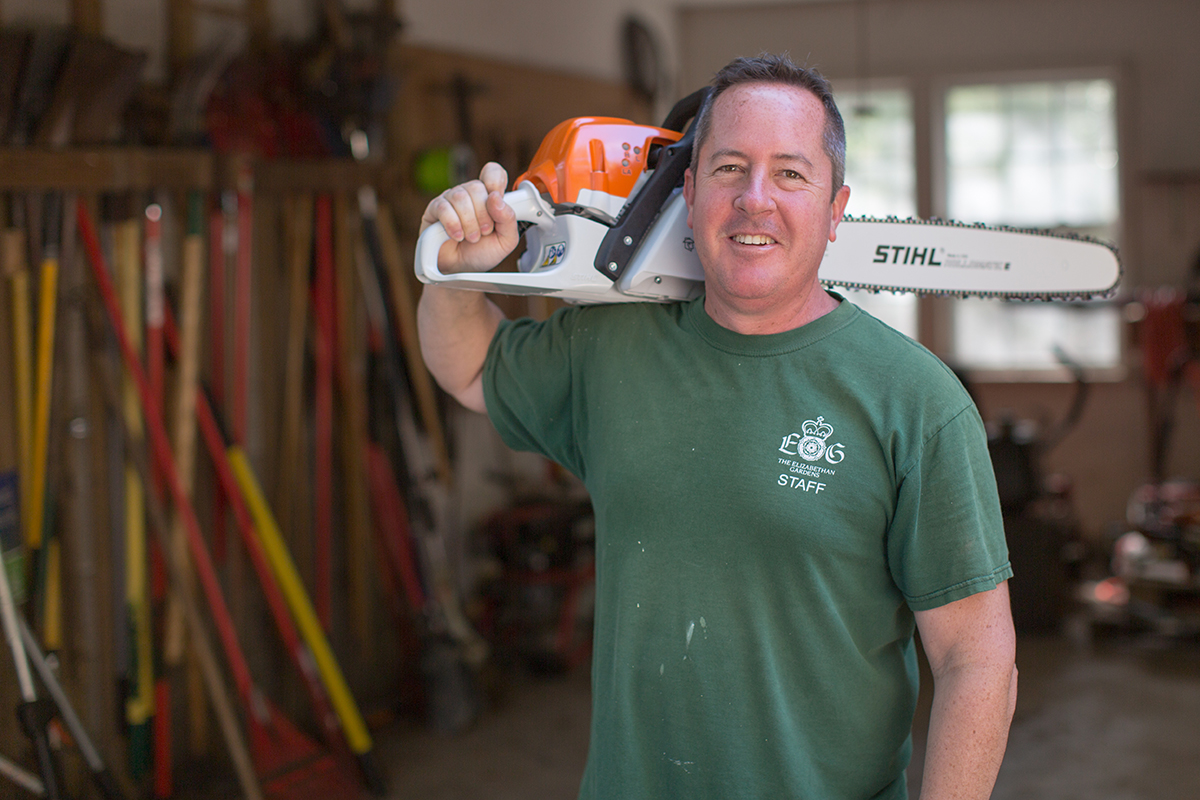 On this unseasonably warm February afternoon, the soft pink petals of a saucer magnolia tree lie on the green grass of the Great Lawn. Blooming peppermint camellias line the trail and sprouting daffodil bulbs are breaking through the soil toward the sun.

You could say this is Jeff Wuilliez’s office – the 10 acres of majestic landscape that make up The Elizabethan Gardens on Roanoke Island.

The gardens are closed to the public in February, but Wuilliez is busy preparing for the spring season. In the distance, the sound of a chainsaw hums and buzzes as Troy Faulkner levels out the yaupon outside the sunken garden.

With Wuilliez as the garden manager, and Faulkner as his assistant, it’s a two-person show when it comes to maintaining this peaceful landscape that draws thousands of visitors every year. For the past few months, the two have been working on resetting the gardens – which includes re-establishing the original canopy based on the three vertical tiers typically found in an Elizabethan-era garden. 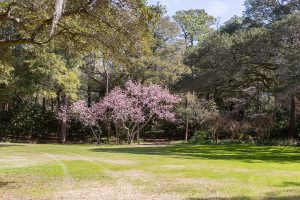 The saucer magnolia tree on the garden’s Great Lawn.

For Wuilliez, his focus is primarily on light. “We’re doing some heavy pruning to bring light back to the gardens. It’s important to lift the garden up and establish a canopy,” he says. He points out fresh cuts in the nearby saucer magnolia, which have allowed the sun’s rays to reach the grass that now covers the lawn as a result of their efforts. Not long ago, the lawn was patched with dirt because of shade from overhanging branches.

“Once the original canopy is established, we’ll focus on accent planting again,” Wuilliez says, adding that the well thought-out plans and vision of The Elizabethan Gardens’ Executive Director Carl Curnette III are finally coming to fruition.

As Wuilliez stands in the courtyard, his favorite section of the garden, he talks with anticipation about the new iron gate that will be installed at the entrance in May, one that will be identical to the gardens’ original gates. A wooden gate is currently filling in.

“The courtyard is my favorite spot. I guess it’s because I like the structure and the succession of flowers here, and that it’s different each time you come in. There’s always something new,” says Wuilliez. This year, he and Faulkner plan on having a pinwheel of four different color variations in the courtyard to greet visitors. 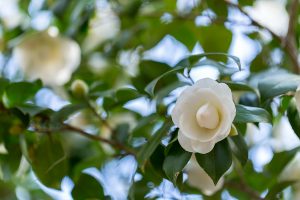 Flowers beginning to bloom on an unseasonably warm February day.

As for the seasons, Wuilliez says he loves spring the best. “It’s so nice to see everything come back. During the winter, we’re busy maintaining and trimming. During spring, I’m anxious to see the fruits of our labor.”

Spring – at least this year – seems to have come early to the gardens, and Wuilliez wonders if March is going to come in like a lion. “Weather is probably the most frustrating aspect of my job,” he says. “Especially those unforeseen weather events like hurricanes and nor’easters.”

Planting schemes are well researched, Wuilliez says, and April is generally spent putting spring plants down after they arrive. As for the day-to-day operations, he says that can vary with the seasons.

During the summer, Wuilliez’s day starts at six a.m. with a solid two hours of irrigation and opening the garden’s four facilities. Mowing always happens on Wednesdays and pruning and trimming are daily chores.

“We have garden projects mapped out for the entire year that are season specific, but our schedule is very fluid,” Wuilliez explains. “It has to be because of Mother Nature.”

That doesn’t mean they don’t have long-range projects, which include redoing the woodland garden, creating an educational kiosk for children, initiating a semi-formal kitchen garden with heirloom plants, and transforming the garden shop into a multi-faceted educational center for visitors of all ages. 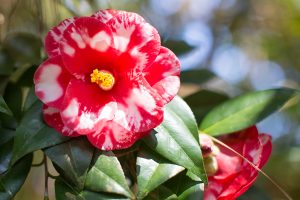 The gardens is full of camellias in a variety of shapes and colors.

A larger shoreline stabilization project is also set to begin this summer that will cover about 3,500 feet along the garden’s waterfront from the National Park Service border to Waterside Theater. These efforts will re-nourish the garden’s beaches by building groins to stop the wave action causing erosion.

Wuilliez says it’s estimated that the project will take a year. Once it’s complete there will be plenty of dune grass and a trail with signage that tells the story of the restoration.

Wuilliez’s busy schedule also includes fielding regular calls from people who have gardening questions, a task he says he’s always happy to do.

“I’ll take anyone’s call,” he says. “And we have a lot of volunteers who help us around the gardens. We always welcome the help.”

Wuilliez holds about 30 workshops throughout the year, focusing on everything from pruning hydrangeas and crepe myrtles to an open forum during which gardeners can exchange ideas. In fact, he already has an outline written for a workshop he hopes to hold on the kitchen garden.

And if the blooms he and Faulkner have brought to the gardens this spring are any indication, the improvements Wuilliez has planned for these beautiful gardens are sure to begin blossoming in no time.