The Art of the Tattoo 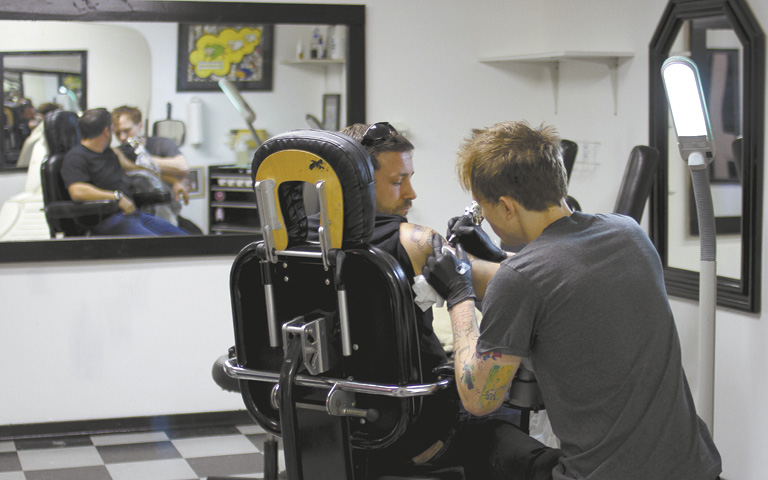 Getting inked at Vertigo Tatoo. Photo by CHELLEshots, Michelle Conner,

The history of tattoos is ancient, dating as far back as the bronze age.

The Outer Banks, however, was a little late to the party, with the first professional tattoo studio opening in 1999 in a beautifully restored 100-year-old house in Manns Harbor.

Owner Brian Mervine says he decided to open Vertigo because of the need for a safe and sanitary tattoo shop on the Outer Banks. A lot of locals were interested in tattoos, but there was no professional shop nearby.

Mervine believed a tattoo shop would do well on the Outer Banks and he was right; Vertigo has been thriving for thirteen years.

According to Mervine, the bad reputation lingering on tattoos today is a remnant of the 1920s when tattoos were popular among prisoners and motorcycle gangs. Such stereotypes prevented Vertigo from opening on the beach in 1999 due to Outer Banks’ desire to remain family-oriented.

Now an integral part of the Outer Banks community, the shop has become more than a place to get a tattoo or body piercing.

Vertigo hosted their twelfth annual Toy Run in November. The family-friendly event was  open to the entire community and included a barbecue dinner, live music, raffles and prizes in exchange for the donation of a toy and a ten dollar donation. The proceeds benefited Dare County children at Christmas time.

The sense of being a part of a community is one of the most gratifying parts of working at Vertigo. Tattoo artist, Mark Wiseman, recalls a New York family who visits the Outer Banks annually—each of their eight daughters visiting Wiseman at Vertigo on her eighteenth birthday.

The tattoo artists who work with Mervine are artists in the truest sense, often drawing on a wide-ranging creative background.

Jeremy Hunter began drawing with a passion at a very young age and continues today at Vertigo, where he has worked for nine years receiving rave reviews from his customers.

“I wanted to be a comic book artist,” Hunter says. “Then, I turned eighteen and got my first tattoo. That’s when I decided to become an apprentice.”

As the owner, Mervine encourages all of the artists at Vertigo to explore every art form possible.

“They are all talented with fine lines, bold lines, black and white [images], portraits, photographs,” he says. “We all want to be as prepared as possible for anything that comes through our door.”

Vacationers from almost every state have come to the studio, often coming from large cities where they could choose from an abundance of well-known tattoo parlors. Many, however, maintain a loyalty to Vertigo because of the relaxing atmosphere, a top priority for Vertigo, second only to cleanliness.

Today’s tattoo artist is often stereotyped as someone who “has a rock star attitude and is very intimidating,” says Mervine. That is not the case at Vertigo.

Local resident, Andrew Dalton, who had all ten of his large, colorful tattoos done at Vertigo, describes the artists as “a bunch of down-to-earth people who cater to your needs and work with you.”

“We are 100 percent accepting of every single customer we get. Their appearance, lifestyle, none of that matters at all when they come here. Everyone leaves with the awesome tattoo that they came here to get,” says Mervine.

When Vertigo opened, their clientele consisted primarily of men. Today, Mervine believes that women make up the majority, a surprising feat considering the first American women with tattoos were circus performers, and later, a woman would need to present her marriage license and her husband in order to be tattooed.

Mervine recalls tattooing a woman who had waited eighty years to get the tattoo she had wanted her entire life.

“People get tattooed for a lot of reasons,” Hunter says. “Sometimes, they just love the picture, sometimes it’s a family tattoo. We do a lot of memorial tattoos [for lost loved ones]. Pet portraits have become popular recently, too.”

Dalton shares his own means of tattoo choice: “I don’t choose images from the walls in the shop, and I don’t bring in pictures for the artists to imitate. I tell them my idea then let them take over and use their own creativity.”