From Scrap to Art 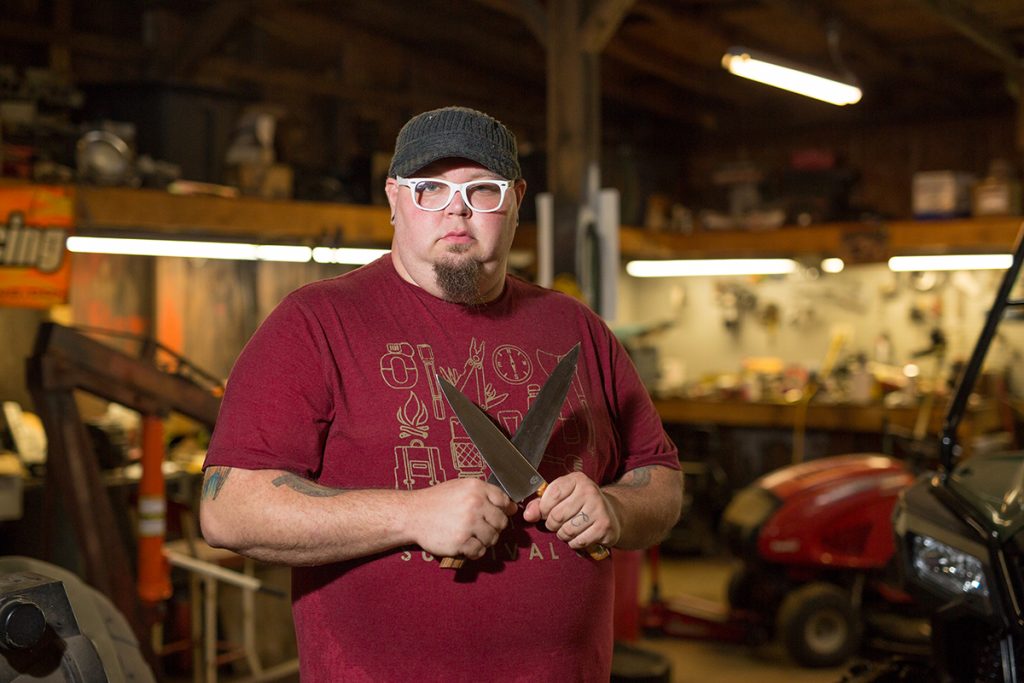 Bladesmith Dave Melson in his shop. Photos by Ryan Moser.

Dave Melson pops open a plain looking toolbox and brings out some knives. They’re not like any store bought knives. Beautifully balanced and light in weight, each handle is different and in its own way a part of the artistry of the knife.

There are other differences as well, some not quite as apparent. The blades are highly polished, each with a remarkably sharp blade. A signature feature of his knives is that they also have a spine that is slightly rounded, a great selling point for those who spend a lot of time in the kitchen.

Dave, the creator of Kilmarlic Knife Works, is both a bladesmith—that’s a knife maker—and a chef at The Blue Point in Duck.

He makes his knives at his home in Powells Point next door to Melson’s Junk & Salvage, his uncle’s business. That’s where he gets most of the metal for his blades. Some of it comes from old cars. “I use the leaf springs and torsion bars from cars, but they are usually older cars from the ’70s and back,” he says. No reason, he adds; he just likes them more. 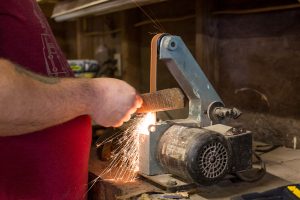 Dave working on one of his blades.

Most of his knives, though, are made from pieces of scrap or old tools that someone has thrown away.

Today he’s holding a farrier’s rasp—a file with deep teeth on one side and finer teeth on the other.

“Files make great knives,” Dave says. “The people who make the files source out really good steel. When it’s no longer good for grinding or filing stuff, you can turn it into a piece of art—a really nice knife.”

Working with scrap, creating something new from metal, seems to be in his blood. “It’s a family tradition. We’re standing in my father’s garage. They built race cars and drag cars. I just went in a different direction.”

There is also, of course, his uncle’s salvage yard that was started by Dave’s grandfather.

“Interesting note about this salvage yard; it’s the oldest licensed salvage yard in eastern North Carolina. He started it right after he came out of the Navy after World War II,” he recounts.

That’s the same grandfather who made the hammer that may never break. The hammer, though, is the third part of the knife making process.

The first step is walking next door and finding material. The next step is heating the metal. Dave walks over to a metal cylinder packed with insulation.

“This is my forge, which I also built,” he says. “I built it out of an old scuba tank that I also reclaimed from the salvage yard.” His fuel source is a weed burner. “It creates a bigger flame. This whole thing will heat up to about 2,200 degrees.”

The third step involves his grandfather’s hammer, which is truly a different design than most. Attached to the large mallet head is a heavy metal shaft.

“My grandfather got tired of the wooden handle breaking so he actually took an axel shaft out of a truck and welded it,” Dave explains.

It’s hot working with metal, and the process of creating a knife from a farrier’s rasp cannot be hurried. The metal gets hot, and then the shaping begins.

“You heat it up as high as you can. It’s glowing orange. You have just a five-gallon bucket of regular 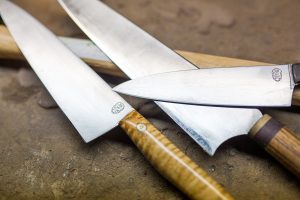 sand. You put it in there so it can cool down slowly,” he says.

Then the difficult work begins. “You hit it and you shape it and it’s a long, hard, aggravating process sometimes because you hit it and it doesn’t do what you want it to do,” says Dave. “The great thing about heat and steel is you can heat it up and do it again.”

After a number of trips between the heat, the sand and the mallet, something resembling a knife emerges.

That’s when he starts shaping it and one of the unique features of a Melson knife is created.

“Being a chef, I think about things a little bit differently than some other knife makers do,” he says. “All of us chefs get calluses on our hands from our knives. On most production knives, there’s a hard 90-degree angle on the spine. What I’ll do with my knives, I round that so it’s nice and smooth so you don’t get that callusing on such a hard edge.”

After shaping, the blade goes to the grinders.

As he walks back to his grinders, Dave recites a little personal history. “When I was growing up, I was obsessed with knives and swords and all that kind of stuff. I would always take little pieces of metal or wood and make my own swords,” he recalls.

There are three grinders. Two of them, Dave says, can be found at Home Depot. The third—no surprise—Dave made himself. The homemade grinder has a 2×72-inch belt.

That longer belt is really important in holding the cost of an artisan-created knife down. “What costs the most in knife making is purchasing the belts,” Dave notes. A longer belt is more efficient and does not wear out as quickly as the shorter belts.

There are two more steps before a Kilmarlic Knife Works knife is considered finished. 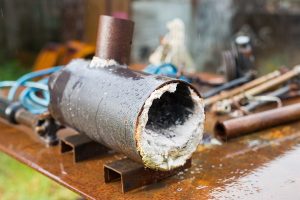 Because the blade is metal, it’s magnetic, so it’s back to the forge. “I go back out to the forge again, and we heat it back up to critical temperature until it no longer reacts with a magnet.”

Putting a handle on the blade is the last step and one that also makes a Kilmarlic Knife Works blade distinctive.

Occasionally Dave will buy some wood or material for his handles, but he seems to prefer to use whatever he can find.

“I just got some Brazilian walnut wood from The Blue Point,” he says. “They were building their new outdoor bar and they had a stack of lumber, so I asked, ‘What are you going to do with that?’ and they told me they were going to throw it away. I said, ‘No, you’re not.’”

Dave has been making knives for the past three years and is gaining a following. This winter, when things slow down a bit, he hopes to take a huge professional step. “I’m looking forward to forging my own knife and being certified as an apprentice bladesmith through the American Bladesmith Society,” Dave says.

Although he is not yet a full-time bladesmith, Dave seems to have found something that artists often express from time to time.

“I’ll sit there and think about how I’ll be dust one day but there’s a possibility the knife I’ve made will still be there,” Dave muses. “I really love that I’m taking something that’s basically junk and turning it into something that’s usable, that someone’s going to really cherish. That just gives me a good feeling.”

Dave Melson can be contacted by email at kilmarlickknifeworks@gmail.com or on Instagram at chefanddestroy.