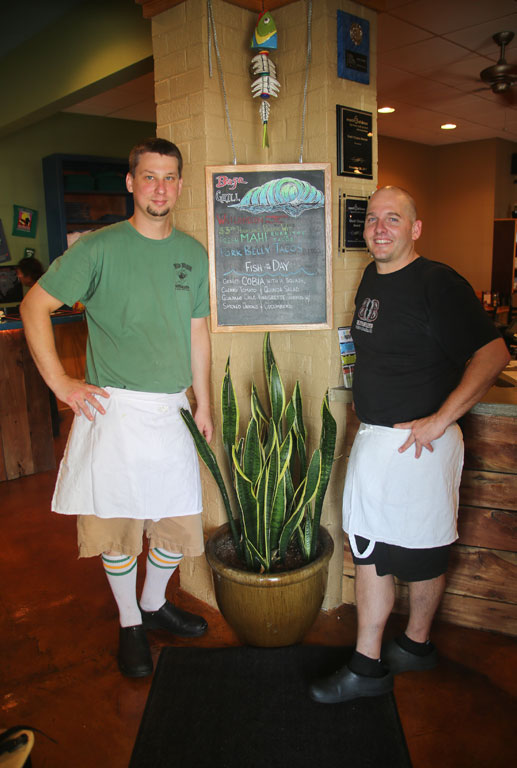 Surviving the first winter as a new restaurant can be downright brutal.

Just ask Rob Robinson of Bad Bean Baja Grill. “We opened in 2008—just when the bottom fell out,” says Rob.

He stumbled across an online blog dedicated to which Outer Banks restaurants wouldn’t make it through the winter. Bad Bean was on that list.

“It was our second year—which was our hardest year,” says Rob. “It actually motivated me.”

Rob, a classically trained chef, had spent years perfecting his craft. “I went to culinary school and for the first seven years of my career I worked at French Laundry, Aqua in San Francisco, Napa Valley and Carmel,” says Rob. When he moved to the Outer Banks, he took a position at the Left Bank (now Kimball’s Kitchen). “I ran the Left Bank for four years. It was the first Four Diamond Restaurant on the Outer Banks.”

Opening a restaurant was the next natural step for him. He opened the first Bad Bean in Timbuk II in Corolla, and a few years later opened his second location with chef Matt Payne in the Seagate North Shopping Center in Kill Devil Hills.

“I didn’t think that the high end style of food would work down here. I always loved this type of food, and I saw the opportunity in Corolla because no one was really doing the California thing, the fish-tacos,” says Rob. “I wanted to reach a broader audience. People might eat at the Left Bank once a year, once a lifetime. This is the kind of place where people eat 2-3 times a week.”

As Rob struggled through the first rough seasons at Bad Bean in Kill Devil Hills, Derik Wineland and his wife Jessica became regulars.

“I’d been eating at Bad Bean and looking at this place for almost a full year,” says Derik of the then-empty shop next to Bad Bean. “I would come by and peek in the windows.”

“Jessica and I wanted to do vintage clothing and decor,” says Derik of Mom’s Sweet Shop. “We just kind of gambled… we thought that other people would like what we like.”

Says Rob, “I remember Callie (artist and bartender at Bad Bean) calling me up and saying, ‘This guy Derik’s moving in next door and it’s going to be awesome!'”

She was right. “I can look back and say that was a real turning point in bringing a whole new feel to the restaurant,” says Rob. 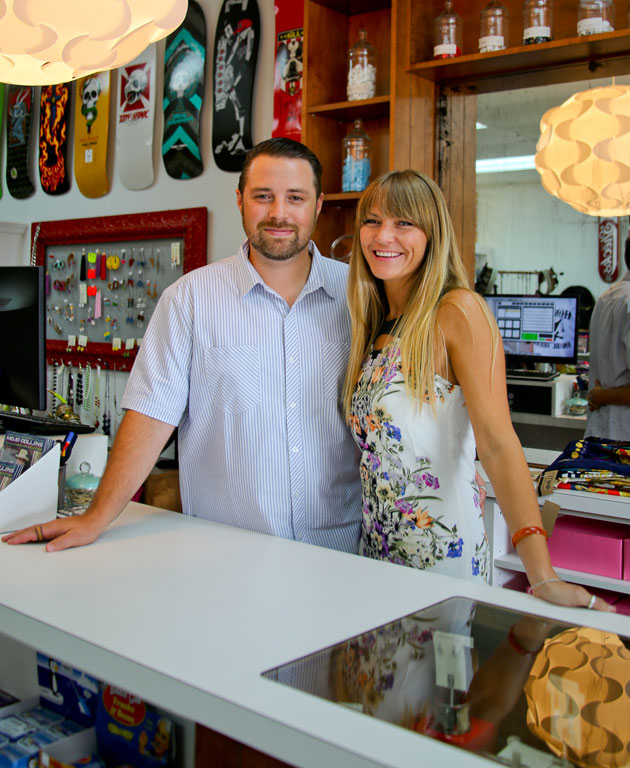 Right off the bat Mom’s Sweet Shop made their own niche as a haven for local artists. “Jessica and I are both really into the art scene. She’s an artist; she makes most of the jewelry here,” says Derik. “There are just so many great artists here that don’t do your traditional beach art and might not put their art into a gallery here.”

They started featuring new artists every month with an art show on the first Thursday of the month. “For a lot of our artists it’s their first art show,” says Derik. “There are so many people that locally make cool stuff–the candles and soaps here—so why not sell that and put that money right back into our community.”

The art shows have been a boon for Mom’s Sweet Shop, Bad Bean, and the artist they host. Says Derik, “It’s great because they’ll (visitors) get two tickets for free drinks at Bad Bean, so people come in, have a few drinks, check out the art, go back over there.”

When Rob wanted to create more of a nightlife scene at Bad Bean, he reached out to Derik. “Derik was into the music scene and knows a lot of musicians locally. I just mentioned it to him one day and he said let’s do it. It just started off with Derik deejaying one night. From there it grew into expanding the bar, making it more of a hangout.”

“There are tons of great musicians down here… it’s like the art. I’ve always been about promoting musicians,” says Derik. “Rob’s just let me run amok in there!”

All the while Rob and Matt kept experimenting and changing up the menu at Bad Bean. “The food in the restaurant is a collaboration between Matt and me. It’s just us bouncing ideas off of each other,” says Rob. “The calamari tacos–when I first put them on the menu no one would buy them. Now as soon as I put them on they’re gone. People are now more willing to try things; our tapas night was behind that.”

Derik swears by the food at Bad Bean. “I eat there easily every day,” says Derik. “I eat there so much that I just freestyle it… it’s kind of like having my own kitchen and bar. I’ve tried everything, and I love it all.”

Rob and Matt have been winning accolades around the Outer Banks, including Chef’s Choice at the March of Dimes fundraiser, Chef’s Choice and Best in Show two years in a row at Taste of the Beach, and this year Local Seafood Catch at TOB. “It would’ve been a sweep this year if we’d won People’s Choice,” says Rob.

The guys have big plans for the fall, with hopes for an October art event. “We have this whole parking lot that we could do something real cool with,” says Derik.

Of their dream collaboration, the sky’s the limit, but likely it would involve great food, local art and skateboarding.

Derik laughs, “I’d be on the roof rapping with a vert ramp out front!”