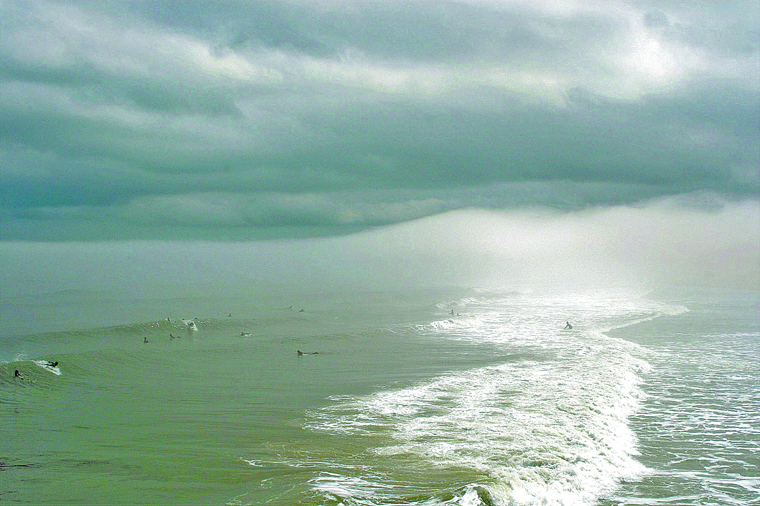 Magic on the Outer Banks. Even break and a warm day.

In case you haven’t noticed, the act of riding waves has become quite popular in our coastal region. Being around the Outer Banks in the summer months, it’s hard not to notice the number of cars, trucks and SUVs cruising up and down the Beach Road stacked with boards and passengers straining to get a view of the ocean. In our national media, surfing is being used to sell everything from cars to credit cards. Surfing is cool. It has its own culture, style, history and language. There is something about spending time playing in the ocean that is infectious, and to those who have never tried it, quite intriguing.

What is it about the act of riding waves that makes it so attractive? There is the health factor. It’s a great way to get exercise without even being aware of the work-out. The amount of balance and coordination it takes just to sit on a board without toppling over would amaze the beginner.

There is the fact that you’re spending time in one of the most natural environments on the planet.  Even if you never manage to catch a single ride, an hour or two spent a few hundred feet from the shore brings a sense of renewal and rejuvenation.

There is also the mental relaxation factor. Before you paddle out, you have to put down your electronic devices. There are no e-mails, stock prices or sports scores to check. No social media status updates, just people who are interested in the next set of waves rolling down the coast, some birds and maybe some fish.

The truth about surfing is that it is hard to describe. Like explaining chocolate to someone who has never tasted it, words just fall short. It’s one of those things that if you really want to understand it, you have to try it.

The good news for the uninitiated is that the Outer Banks has an abundance of surf schools ready and willing to make that first time experience safe and enjoyable. A quick local media search should help locate the closest instructor. From there it’s a matter of making the appointment and meeting at the beach.

Most schools require the student to be in somewhat decent shape, enough to do some push-ups and have rudimentary swimming skills. The first portion of the lesson should include elements of beach and water safety, awareness of tides and rip currents and basics of surf etiquette.

After that comes some beach work. This is usually done on the sand or the board itself. The instructor will take you through the basics of paddling and getting to your feet. You’ll hear terms like pop-up and turtle roll, white water and green face and somehow they will make sense.

Before you know it you’ll be out in the water waiting for that first wave. It usually happens with a little push from the instructor, but when you get to your feet and head in towards the beach the feeling can only be described as surf stoke. At this point the length of ride depends on the student’s amount of natural balance and level of focus. If you make it to the beach, it’s a win. If you fall off, you get a soft landing on the water and you head back out to the line-up for another one, which is also a win. Who doesn’t like a win-win situation?

This is where the problem begins, if you want to call it a problem. That first wave can hook you like a tuna. I cannot recall how many times I’ve listened to someone recant the story of their first wave, followed by the statement “I want to do that for the rest of my life” or “I can’t wait to get back out there on the next swell.” It can begin an addiction that lasts a lifetime or at least until the winter months, when the water temps start to get a little chilly.  Either way it’s definitely worth the effort, so give it a try while the water is still warm.

See you out there.