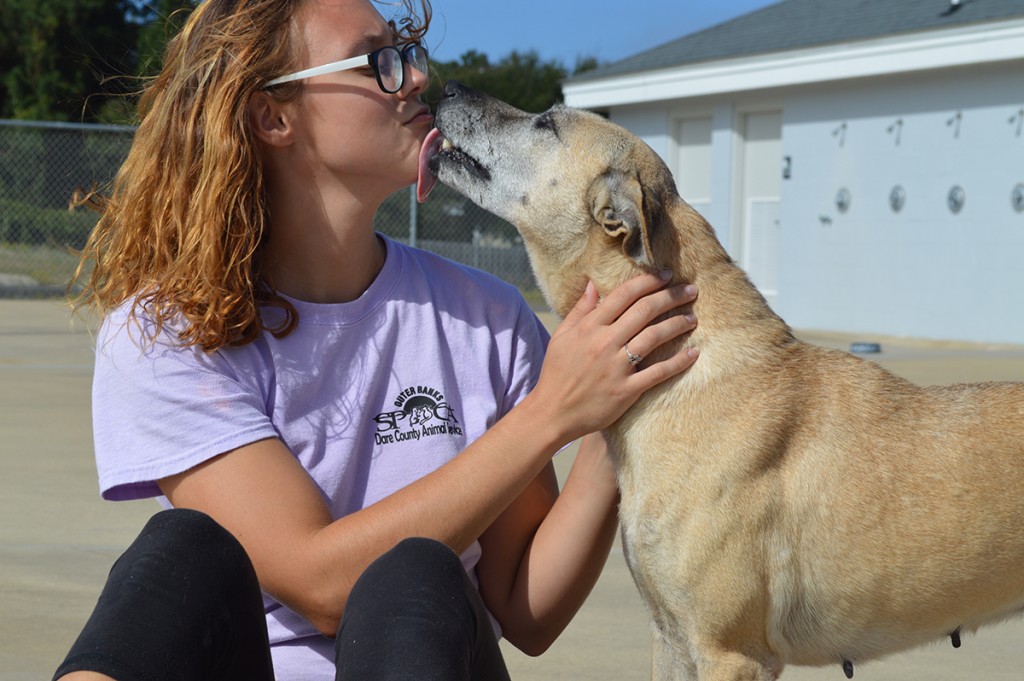 The Outer Banks SPCA became home to seven new dogs in October. Once bound for a dog meat farm in Jeonju, South Korea, these canines were given a second chance at life.

Scout, Betty, Linda, Luna, Buddie Girl, Sandy and Bailey were among 31 dogs rescued by Humane Society International. The dogs have gone from being destined to become someone’s dinner, to being loved, cared for, and thoroughly spoiled by the staff and volunteers at the SPCA while they await adoption.

While these pooches made headlines, most of the other dogs, cats and sometimes goats the SPCA cares for usually have somewhat less exotic origins.

Graves has been working in the animal welfare field for 10 years, and has been director of the Outer Banks SPCA for the past three. He has nine dogs and many cats himself, and sports a large tattoo proclaiming: “Spay/neuter saves lives.” To say that animal welfare is an issue near and dear to his heart is undoubtedly an understatement. That may be why he’s worked so hard to make life better for the animals at the SPCA. 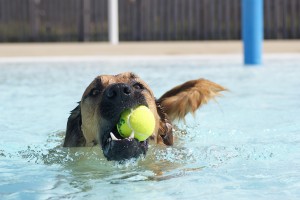 The Outer Banks SPCA promotes enrichment opportunities for the rescue animals, such as taking them to play in the YMCA’s pool during their annual Splash and Play event.

In addition to expansions like the new dog runs in the backyard, adding a “catwalk” (high shelves for the cats to climb on), and an isolation area for sick cats, he and his team have been working to increase enrichment opportunities for the animals such as taking them to play in the YMCA’s pool at their annual Splash and Play event.

But the biggest change has been a dramatic and highly successful push to increase adoptions. Since 2012, pet adoptions have increased from 400 to more than 800 annually. Along with giving much of the credit for that to his crew, Graves says that most of the difference has been in making adoptions more accessible and educational. Anyone who’s ever adopted a pet knows the screening process prospective pet owners must go through. Some rescue groups can be incredibly strict on their requirements, excluding people who work long hours, don’t meet certain income criteria, or don’t have a fenced-in yard. The Outer Banks SPCA screens potential pet owners, but they’ve eliminated a lot of those strict provisions.

“Someone who works a lot or doesn’t have a lot of money can still be a great pet owner,” says Graves, who stresses that in most cases, any pet placed with a family is going to be in a better situation than a pet that’s stuck at the shelter.

They also do everything they can to make sure new pet owners have all the tools they need to take care of their new furbaby. The pets at the SPCA come spayed/neutered, micro-chipped, evaluated by a veterinarian, vaccinated, and with 30 days of health insurance, all for a very small adoption fee that’s quite frequently waived or reduced by promotions. They offer new dog owners behavior modification classes to train their pups with the hope that better education will encourage pet retention. 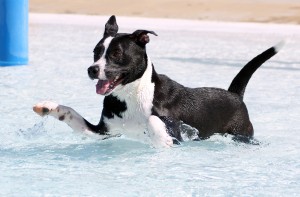 Another happy pooch enjoys frolicking in the water during the YMCA’s Splash and Play event.

“If you have any behavior issues, you can come back to us. We become a resource. You can call us,” says Graves.

There are still many ways you can help, even if you don’t have room for a new pet in your home.

“Anything you could possibly want to do to help animals, you can do here,” stresses Graves. That includes everything from working directly with the animals to pet photography and clerical work done in the comfort of your own home. The SPCA is also always looking for more people to come take the dogs for walks or hang out with the cats.

Its foster program allows potential owners to take a pet home for as long as a few months or as brief as an afternoon at the beach. At the time of this writing, when Hurricane Matthew was bearing down on the Outer Banks, the SPCA was looking for “storm fosters” to take animals home during the weather-related chaos. It’s much less glamorous, but they also desperately need volunteers to clean cages and litter boxes. And in addition to cash donations, they could use plenty of old blankets, bleach, dog food, cat and kitten food and lots of kitty litter.

The current batch of staff and volunteers is working hard to take in every animal and make their lives as good as possible. Graves himself says he works nine to 12 hours a day, six days a week.

“It’s a lot of work for not a lot of money with not a lot of staff. It gets overwhelming at times, but it’s definitely worth it,” says Graves.