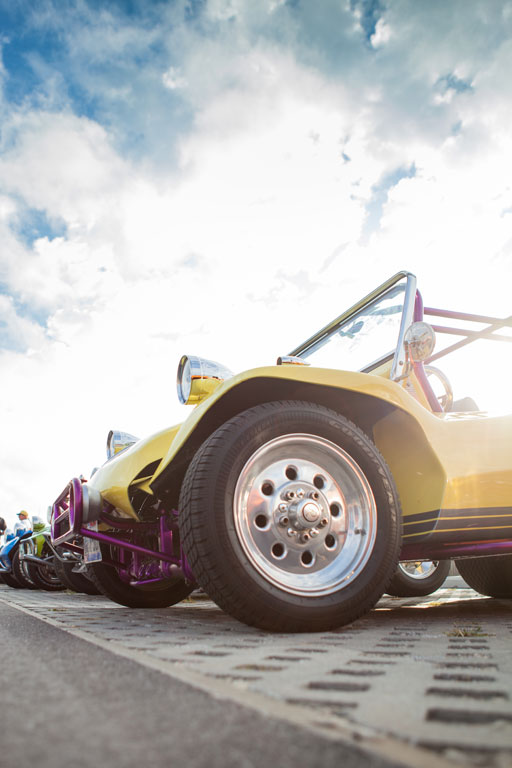 Manx on the Banks lined up in Nags Head. Photo by Ryan Moser

A grin seems mandatory when driving a chopped down VW with a fiberglass body and stubby rear end like a Manx cat. I had just finished my interview with Vince Simansky who had brought “Manx on the Banx” to the Outer Banks and he said, “You have to drive one of these to know what it’s all about.”

So I poured myself into the driver’s seat—no doors in these—wound it out a bit on Colington Road, and I can’t stop smiling. I have not had this much fun driving since I owned an MGB too many years ago.

Manx on the Banx has become an annual event. Started three years ago by Simansky, it seems to have attracted five or six times more this year than came last year. This year an informal finger and toe count put the number of buggies at somewhere around 110-120.

“There are a bunch of California events,” Simanski says. “But I wanted something on the East Coast. Since I live here I knew we’d do it better than anyone else.”

There were license plates from west coast to the east, and everything in between. There is a registration required and some rules—commonsense, really: careful with the alcohol and obey traffic laws.

What it’s really about, though, is letting the cat out of the Manx and having fun. “We drove up to the beach in Corolla,” Simansky says. “Everyone was grinning from ear to ear.”

There are beach buggies, and then there is the Bruce Meyers Manx—the first—and to many people, the best— fiberglass beach buggy kit, a kit that could take a Volkswagen body and convert it into this amazing little car that seems to merge design, freedom and fun.

Bruce Meyers, the creator of the Meyers Manx, did not invent the dune buggy—there were a number of people cutting down existing cars and driving them out to the desert throughout the 1950s and early 60s. What Meyers did was create a practical, drivable design that could go anywhere.

Bruce Meyers is one of those homegrown geniuses who seem to spring up at odd times in the United States. A decorated WWII veteran, he drifted around a bit after the war, took to sailboats, came back to California and began working with fiberglass and sailboat design.

There was something about fiberglass that caught his engineering attention because he seems to have been the only one who recognized how it could be used to create a practical buggy. “I think it was subliminal,” he said in an October interview while at the Manx on the Banx event.

In retrospect, the concept seems simple; create a fiberglass body that will fit onto a car chassis—in this case a VW Bug. Take the old body off, pop the fiberglass body on, and the result is a lighter weight, much more responsive machine.

Of course it’s not quite that simple and some adjustments had to made along the way. As an example, the first 12 bodies produced used a steel frame within the fiberglass to attach to the chassis. Meyers shortened the frame and chopped 14” out of the VW, which brought the price down and increased the performance of the car.

Orders started pouring in—as did the imitators, and after years of fighting a losing battle on patent infringement cases, Meyers walked away from his company, B.F. Meyers & Co in 1970. The following year the company ceased operation.

In 2006, his restless imagination unable to sit on the sidelines any more, Meyers started up a new company—Meyers Manx—with more sophisticated designs and features to accommodate larger more powerful engines. 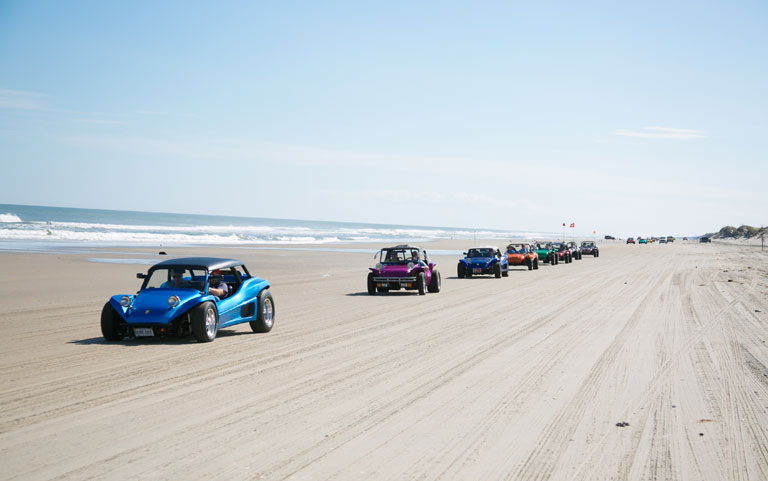 Nonetheless, the original approximately 5,500 or so Meyers Manx that were produced in the late 1960s to 1971 have a devoted following. Many, if not most of them, that have survived have to have extensive restoration work, yet as long as the body is intact and the frame has survived, the look and the feel of a Meyers Manx is unmistakable. 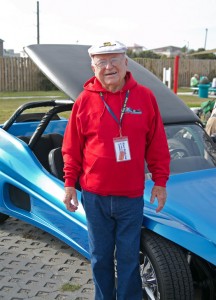 Bruce Meyers, inventor of the Meyers Manx at Manx on the Banks.

Vince Simanski found his Manx in a barn in Fayetteville. “I had wanted to buy a dune buggy since I was a kid,” he says. “I found it and my wife said yes.”

It was a labor of love and it took the better part of two years, but the result is a car with a touch of the modern in the paint but has retained the look and feel of the original. “When I consider Bruce’s styling,” Simanski says. “I like the old school look that it has.”

The ride of a Meyers Manx is stiff, almost jarring, although Vince points out that some of that is how the owner wants his car to ride. The second generation Manx designs have made accommodations for bigger engines and even room for rear seat passengers.

But there’s something magical about the original design . . . it’s primitive, simple—the gages on Vince’s Manx are a speedometer, gas gage, windshield wiper.

It’s probably not a car you would want to drive from Nags Head to Laguna Beach—it is a little bit cramped, definitely noisy and I’m not so sure how dry it would keep you in a hard rain.

But take it some place where your thoughts can run with the engine and magic seems to happen . . . There’s no radio . . . just your own imagination taking you bouncing across the sand to some beach party with Annette Funicello and Frankie Avalon where the sound of the surf is a backdrop to a day of innocence and fun.