For the Love of Doves 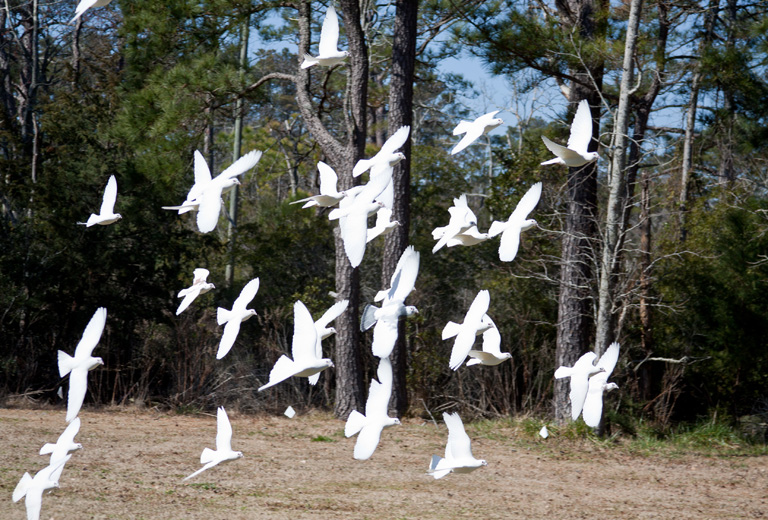 Nestled off Kitty Hawk Road, sits the home of Jeanne and Steve Brook, a beautifully updated 100-year-old white farmhouse with a red barn and a wonderful menagerie of animals. Twenty-one guinea fowl, two fainting goats, chickens, roosters, a peacock and his peahen mate, ducks, a bunny named Junior, and Reilly the herding dog make this well-kept yard their home. 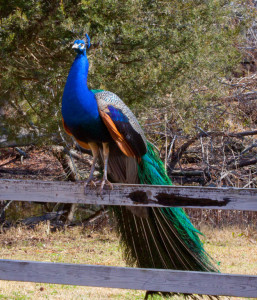 But as beautiful as the peacock and his three feet of cascading blue-green feathers may be, the real stars of the show are their doves. Jeanne and Steve currently have nearly a hundred homing pigeons (rock doves) and ring-neck doves, some for weddings and some for racing.

Steve, originally from Canada, grew up racing pigeons and it was a hobby he missed. “I’ve had birds my whole life,” says Steve. “I was just waiting to have a place here to get them again.” When Jeanne and Steve purchased the farmhouse, he was able to relocate his birds to the Outer Banks.

Once he’d brought the flock home, Steve joined a pigeon-racing club in Chesapeake. “We take the birds to a common spot where they’re entered into the race with a band…The band is scanned when they arrive back at the loft, and their time is calculated by speed per foot,” he explains.

Somehow, someway these birds can find their way home from relatively far-flung locations—up to six or more hours away. Says Jeanne, “Scientists haven’t figured it out exactly—theories are they draw on several tools including using the sun and the earth’s magnetism as a compass, and sense of smell or visual cues.”

“They’re fast; they’ve been known to fly 60 mph and hundreds of miles in a single day,” says Steve. “When we take them training or to weddings they usually beat us home.”

Training the doves takes time and patience. “We work with their homing instinct,” says Jeanne. “We let them fly around here so that they know this is home. Then we take them farther and farther out.”

In addition to training the birds, keeping so many animals happy and healthy is a full-time job—including twice daily feedings, keeping the water fresh and their areas clean, and egg-checking. With dozens of birds roosting, there are often eggs and baby chicks. 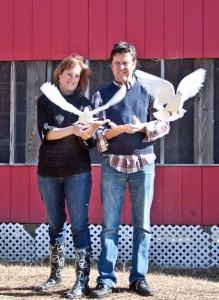 Doves and pigeons lay just two eggs at a time, explains Jeanne. “They make great parents; they each take turns sitting on the nest and looking after the babies,” says Jeanne.

Jeanne and Steve saw an opportunity to branch out into the wedding industry with their expanding flock. They started a dove release business, When Doves Fly, in 2010 and it keeps growing each year.

“It’s a low cost component of a wedding,” explains Steve. “And it makes a great photo-op.”

Couples also like to include the birds because of their meaning. “Doves signify fidelity, peace and love—they represent the couple starting their lives together,” says Jeanne.

Jeanne and Steve couldn’t be more pleased that their business is growing. “What I love is the natural aspect of it,” says Steve. “It’s the opposite of high-tech. It’s something we can do in our own backyard.”

And speaking of that backyard, Jeanne and Steve are looking to add a few more furry friends. Next on their list: alpacas.

Jeanne waves to the yard, “We have that whole pasture out there.”