Buried Treasures—What is Under Jockey’s Ridge? 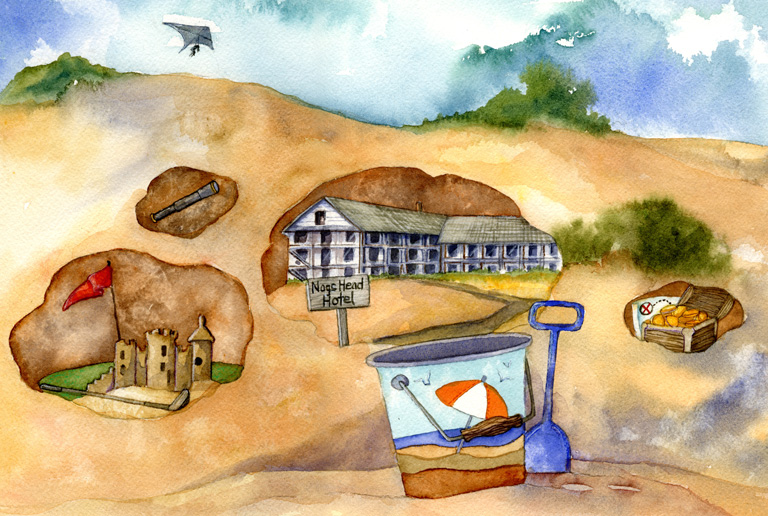 Outer Banks artist Liz Corsa let her imagination go wild thinking about what could be buried beneath Jockeys Ridge.

You can’t miss it. You drive on the bypass and on the west side of the road, it slowly appears, rising above the tree line, a huge mound of glistening sand.

Jockey’s Ridge is the largest living sand dune on the east coast and it’s pretty darn awe-inspiring. The constant breezes on the windswept shores of the Outer Banks keep it moving to the southwest approximately three to six feet per year. While it’s been relatively stable the last few years, there is photographic proof of the putt putt course it devoured in the late seventies and early eighties. So, if it ate a miniature golf course, what else may have been lost to the sand over the years?

Informal questioning began among Bankers by a question posed on Facebook, “What do YOU think is under Jockey’s Ridge?” Answers varied wildly: private homes, oyster shells, Jimmy Hoffa, a large hotel, the remains of some unlucky hang gliders, nothing as good as what’s on top of it on any given summer day and, of course, the well-documented miniature golf course.

And as it was across the street from the famous (or infamous) Nags Head Casino, many folks claim to have lost their innocence on the TOP of the dune after a raucous night of dancing at the Casino. But as to what is actually under all that sand, even after numerous live responses and over 70 responses to the Facebook posting, the real answer required a bit more investigation.

Jockey’s Ridge State Park is a 420-acre area with lush maritime forests. The Roanoke Sound Estuary surrounds the three peaks of sand, equivalent to 6,000,000 truck loads. The tall dune area of Jockey’s Ridge is known as a medano—a massive, asymmetrical, shifting hill of sand lacking vegetation. The desert like environment of the dunes makes life difficult for vegetation or animal life. As civilization has encroached on the ridge, vegetation has stabilized a great deal of the area, but the notorious winds of the Outer Banks cause a continual shifting of sands on the dunes.

In his book The Outer Banks of North Carolina, David Stick writes of early visitors noting the shifting sands often covering residences that peppered the dunes, but no specific location was given.

By the early part of the 19th century, Nags Head was becoming a vacation destination notable enough to support the elaborate Nags Head Hotel in the Jockey’s Ridge area. The hotel flourished for many years but was occupied by Confederate forces during the Civil War. They burned it upon departure to keep the Union forces from utilizing it.

Some have maintained that the remains were buried by the Ridge, but most agree the hotel was too far from the base of the Ridge for that to be possible. The Nags Head Hotel was re-built later in a location to the south, but also suffered from a fire in the early 20th Century.

Meanwhile, the dunes keep moving. The prevailing southwest and northeast winds push the dune back and forth seasonally. John Beasley, Outer Banks local writes, “When I was a kid, the dune was a hundred yards or more from the bypass. During the 60s and 70s it was moving rapidly to the east. For several years DOT ran a constant string of those little yellow dump trucks (5 yarders back then) clearing the road and hauling sand around to the back side of the hill. It covered up the putt putt, and then it pretty much stopped its eastward movement.” As recently as 2002, 10,000 truck loads of sand were removed from Soundside Road, on the southern edge of the park to the northeast side.

It’s rather amusing that when the question “What is under Jockey’s Ridge?” was posed to the rangers at the Jockey’s Ridge State Park, they both said, in unison, “Sand. As for more than that, nobody really knows.” In the early seventies, the putt putt course was opened featuring a variety of character hazards, but the Park System bought the course from the owner when they finally surrendered to the sands of the Ridge. The giant octopus and cobra hazards are fondly remembered. The top of the sand castle hazard disappeared as recently as 2010, but if we get a prevailing southwest wind season, it might reappear again.

A few moments with Deebo Cox, Jockey’s Ridge State Park Superintendent, confirms his rangers’ earlier statements… sand and nobody really knows. There’s a lot of charming lore that accompanies the Ridge, much like other places on the Outer Banks. As much as the Ridge moves around, chances are, if you’ve spent any time on the Outer Banks, you’ve taken a bit of Jockey’s Ridge with you—in your shoes, your car, your hair, the cuffs of your jeans, your bed—the Ridge is moving.

As to what is under all that sand, it’s the stuff of legend, a little speculation and a mess of wives tales… as it should be.