Shuckin’ Good-Oyster Bars Make a Comeback on the Outer Banks 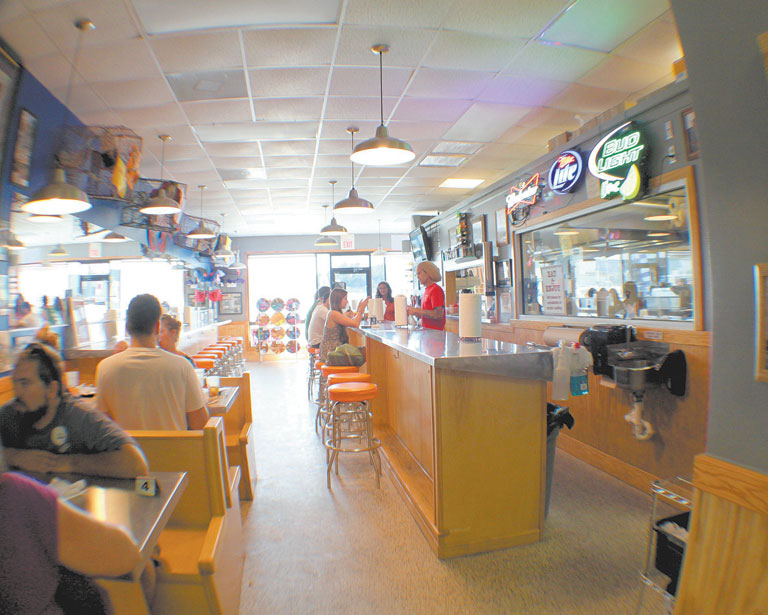 The counter at I Got Your Crabs in Kitty Hawk.

Awful Arthur’s on the Beach Road in Kill Devil Hills has been an Outer Banks oyster-lovers staple for decades. “It’s been 29 years,” Jo Whitehead, Awful Arthur’s owner, says. “May of 1984. That’s when we opened.”

But now there are some new kids on the block to go along with the long-standing favorites like Awful Arthur’s or Kelly’s in Nags Head. Not that there’s anything wrong with the old standbys—there’s a reason why they’ve been so successful for so long. It’s just that now there’s a whole new group of oyster bars, so you could take an evening and do an oyster crawl from place to place.

Dan Lewis at Coastal Provisions actually has an oyster tasting bar. He converted the produce cooler on the south wall. It gives you a chance to try different oysters from different places side by side and it’s remarkable how different the flavors are.

The James River oysters from up in Virginia, which are pretty much the standard during the summer, have a wonderful sea salt taste. That contrasts beautifully with the mild, almost sweet flavor or a Malpeque oyster from Prince Edward Island, Canada. There are a couple of beers and wines that go great with oysters as well, but that’s an article for another time.

Ronnie Merrell and Lee Hux just opened BK Shuckers in May wanting to keep things easy to understand. “It’s got to be fresh with a local flair,” Ronnie says. That’s how the oysters enter in to the mix. “They’re local or Chesepeake Bay,” he says. “And we shuck them for you.”

The first year has worked out really well at the restaurant and Ronnie is already thinking about next year. “We’re thinking about going on up the East Coast and offering different kinds of oysters,” he says.

When Hunter Stuart opened I Got Your Crabs, he had a simple concept—it must be fresh. Hunter is a commercial fisherman and has been crabbing just about his entire life, so he knows fresh, which is why—“We shuck our own.”

Raw, steamed or fried, it all starts in the shell. “You get a gallon of oysters, they’re all washed out,” Hunter says. “When they’re still in the shell, they have all that salt in them. That’s what makes them so good.”

We’re writing this article at the end of summer, and right now local oysters aren’t available, but about the time this edition hits the streets the Outer Banks oysters will be ready for harvest. “They’re a good oyster,” Jo Whitehead says. “I definitely get local (oysters) when I can get them.”

And since we’re talking about oysters in the summer and a local fall harvest about to begin, we’ll let experience speak to the issue of oysters only in a month ending in “R”. “It’s a myth,” Jo says. “When they’re harvested depends on the water temperature at harvest time.”