A Powerfully Curious Portrait Hangs in the Outer Banks 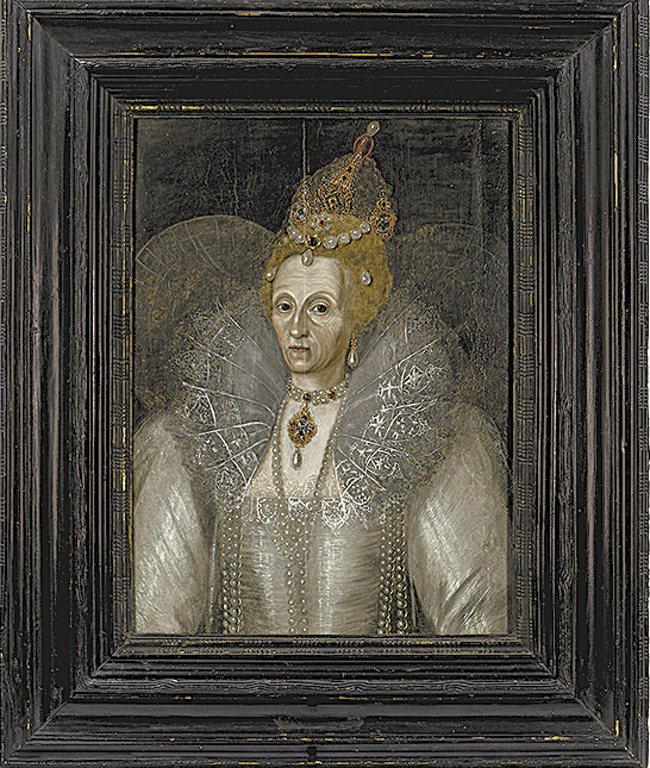 Portrait of Queen Elizabeth I owned by the Outer Banks Elizabethan Gardens.

The portrait of an aging Queen Elizabeth I was recently launched from its more-than-50-year-position as décor at The Elizabethan Gardens in Manteo to the national spotlight.

The oil painting on jointed wooden panels depicts a wrinkled, white-haired monarch. It’s unusual because unflattering depictions of the Queen were banned during her lifetime.

The painting was the subject of an April CNBC’s “Treasure Detectives” episode, and was displayed as part of the “Nobility and Newcomers in Renaissance Ireland” exhibit at the Folger Shakespeare Library in Washington, D.C. through May 19.

Speculation over the decades built up to almost a frenzy in the past several years. After greeting countless visitors for decades, few thought to look deeper, says Carl V. Curnutte III, executive director of the Elizabethan Gardens.

Tise, Wilbur and Orville Wright Distinguished Professor at ECU, noticed the portrait in the 1970s when he visited The Gardens. The staff told him it was an original portrait of Queen Elizabeth I; he responded, “What is it doing here?”

Over the decades, Tise repeatedly asked the same question. He always received the reply, “Mrs. Cannon wanted it hung in the garden shop.”

Ruth Coltrane Cannon, founding member and benefactor of The Elizabethan Gardens purchased the portrait in New York in the 1950s specifically for The Gardens. When she directed that it should be placed in the Gatehouse, no one questioned her.

Cannon was one of North Carolina’s most formidable, powerful women, Tise explains. She, along with her friends, bought most of the furnishings for Tryon Palace—the colonial governor residence in New Bern that was reconstructed in the 1950s.

“In the 1940s to ’50s she knew every art dealer there was,” Tise says. “She bought it from one of the dealers she knew from buying for Tryon Pace.”

Once ECU hired a conservator, Susanne Grieve, Tise obtained permission to take the painting there for examination in 2010. “Susanne analyzed the paints, pigments, materials and so on and basically came to the conclusion it was an original,” he says.

The only enhancements to the painting appear to be in the beads around her neck and in some of the lace. The painted black frame was modified over time, but is believed to be a genuine 16th century frame.

Tise’s colleague, Sarah James, also of ECU’s history department, concluded that the work “could be a study portrait done in preparation for doing a major portrait,” Tise says. It isn’t complete enough to pass as a major portrait; in places, wood is visible through the lace, as are glimpses of the sketches underneath the Queen’s face.

But historians agree that the piece does seem to be authentic to the 16th century; and the oak on which it’s painted definitely is.

At a 2010 presentation at the National Portrait Gallery in England, Tise learned “the oak panels were from the same Baltic forest as the great portraits of the Elizabethan era came,” he says. “They can tell by the grain, the way it’s cut…the wood is absolutely original.”

The consensus has always been that, for being kept in “a rustic sort of building,” the portrait is in excellent shape, Curnette says.

It is currently stored in a climate-controlled environment at the National Park Service archives building on Roanoke Island.

The portrait’s history may forever remain a mystery. But, it has become “a North Carolina heirloom, and is intricately connected with an important North Carolina story,” Tise says. “So whatever happens to it, I hope it won’t be separated from its North Carolina context.”