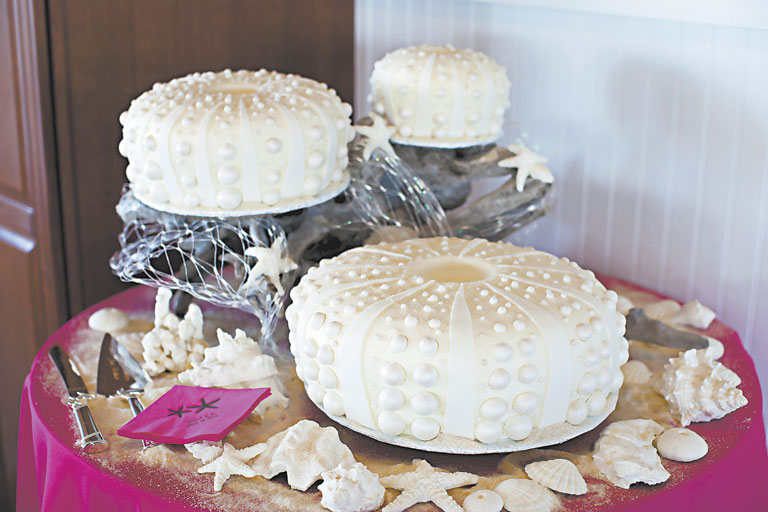 “I really wanted a picture of him with the cake!” says Melinda. But confidentiality agreements with the photographer prohibited snapping the Boss with a bite. 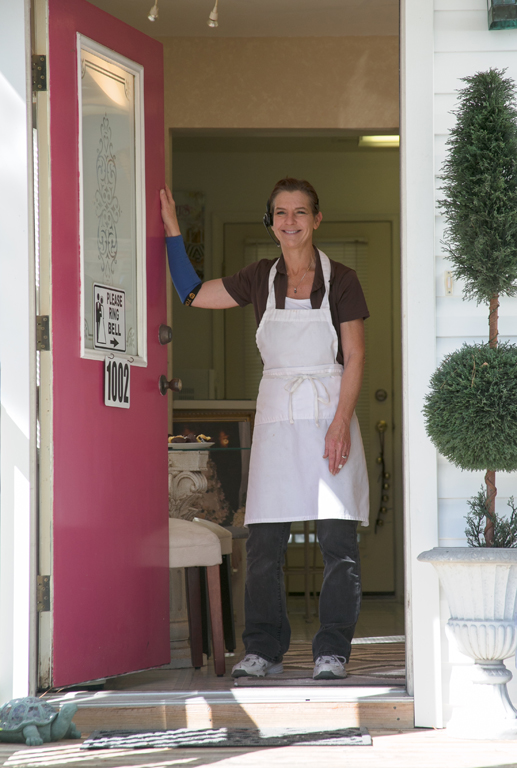 And then there was Ben Weber, an actor from Sex in the City who played Miranda’s boyfriend, Skipper. “I asked him what he did for a living and he said he was an actor,” recalls Melinda. “I said, ‘Good luck with that!’” she laughs. “I didn’t get HBO.”

She’s created all sorts of masterpieces for weddings and events over the past three decades. She baked a cake for the 1984 Olympics Torch Run, a cake for the Lost Colony’s 400th anniversary and countless cakes for both Dare and Currituck County events. She’s baked cakes in the shape of charter boats, a grand piano, a disco ball, an alligator and iced the likeness of Jerry Garcia onto a cake. Her most difficult cake was a recreation of the grounds of The Lost Colony.

She’s baked, iced, carved and decorated more cakes than she can remember, although she’s certain they number in the thousands.

In her eyes, though, one of her biggest accomplishments was her role in the burgeoning wedding industry on the Outer Banks. It was in the nineties when Melinda banded together with fourteen other businesses to create the Outer Banks Wedding Association. Today OBWA has over 200 members and the wedding industry is a multi-million dollar revenue maker for both Dare and Currituck.

Melinda got her start in baking in an unusual place: her high school business class. “I did a project on two different types of cakes,” says Melinda. “I thought it would raise my grade…I was a much better baker than a writer!” The project ended well—she got the grade and found her life’s calling.

She’s been baking on the Outer Banks since the 1980s, making her first wedding cake in 1984. She baked for The Black Pelican and Duck Woods Country Club and then in the nineties she set off on her own. In 1997 Melinda converted her pink gingerbread home in Kill Devil Hills to include a commercial kitchen complete with commercial refrigerators, freezers, convection ovens and plenty of countertop space to assemble layers upon layers of cake.

Most days she spends eight hours baking, and up to 16 hours a day during her busy season. “You can only do things so far in advance,” explains Melinda.

There’s a true art to what she does. In addition to baking something delicious, Melinda has to sculpt and create the cakes, as well as transport them safely to their final destination. Her husband Larry delivers most of the cakes, which is no easy feat. Says Melinda, “The cakes are so heavy at that point.”

Melinda’s signature cake is the “Sandcastle Cake”, and she often gets phone calls from bakers as far away as California asking her how to replicate it. “It’s a very time-consuming cake,” says Melinda. “I’m so used to it; I know exactly what I need to do.”

Her personal favorite is the chocolate soufflé, although she rates the butter rum, apple spice cake and chocolate éclair among the best flavors.

And while she’s known for her beach-themed cakes—right now the Beach Chair cake and the White Chocolate Starfish are her most popular—she notes that local brides opt for fresh flowers, ribbons and bright colors over beachy cakes.

She has a few hard and fast rules for baking: “I don’t cover any cakes with fondant. I don’t care for it, and I think people don’t like it. I use butter cream,” says Melinda. She’s also a stickler for quality. “You cannot pinch pennies,” she says. “You’ve got to keep the quality.”

She’s built a solid reputation, one magnificent cake at a time. “I have a lot of repeat customers, and they make all the difference,” says Melinda. “Word of mouth is so important in a small community like this.”