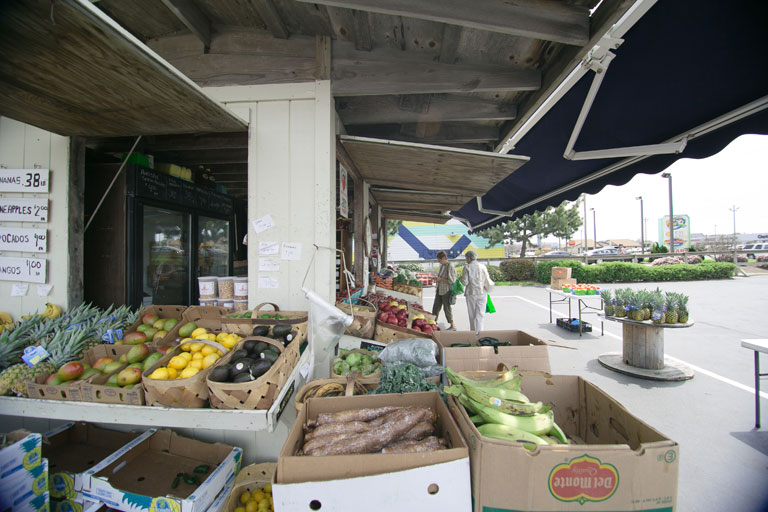 The Local Farm, the Local Fork

The drive to the Outer Banks passes through some of the most fertile farmland in North Carolina—land that has been farmed for over 350 years.

There are no corporate farmers along that stretch of road—although like farmers everywhere, they plant crops that will yield profits . . . and they’ve been successful at it—successful in many cases for generations, because if they weren’t successful, the family farm would have passed to another family long ago.

But farming has changed and changed radically. The concept that what is raised locally will feed the local people has given way to commodity farming and a nationwide distribution network.

Yet there is a yearning to return to the idea that what is raised locally should be consumed locally—the farm to fork concept that has captured the imagination of so many people.

Perhaps it’s Outer Banks jingoism, but a tomato harvested locally and consumed so soon after harvest really does seem to taste better. Or the strawberries picked in Mr. Malco’s strawberry patch just across the Wright Memorial Bridge, they truly do have a fresher, sweeter flavor.

But if we agree to accept the farm to fork idea, then we also have to accept its limitations—that every crop has its season, and there will be no local tomatoes on May 15 or North Carolina strawberries on July 30.

The people who are a part of the concept that local farms can supply local needs understand those limitations and understand that there is a season for everything. What is apparent, though, is the pride they all have in trying to bring all those pieces of the puzzle together, the belief that local is better for everyone.

It All Starts on the Farm 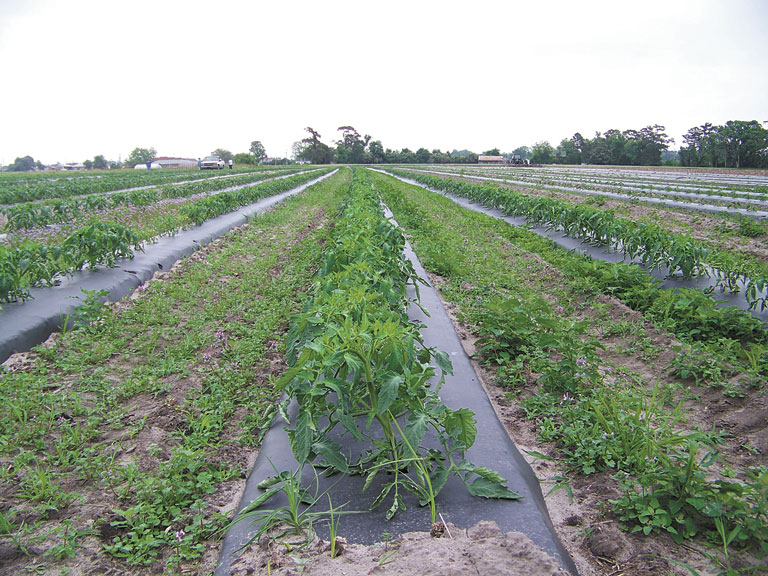 “You can grow anything in Currituck,” John Wright says. John, the vineyard manager of Sanctuary Vineyards on the grounds of the Cotton Gin in Jarvisburg, is talking about the crops that grow in Currituck County. “The soil’s here and the proximity to the ocean gives you a moderating influence.”

Currituck County has always been a farming community, and much of the produce that shows up in Outer Banks produce stands and restaurants in the summer comes from Dare County’s northern neighbor.

But there are different kinds of farming.

John, whose main crops are the European vinifera grapes he grows for the vineyard’s wines, has a small area in which he plants specialty greens and herbs. “That’s the issue. We’re really interested in grapes,” he says. “We don’t have the time to go and be a produce operation. We have fun growing it on the side and enjoying it among ourselves, but I don’t see how you could do both.”

Some of John’s produce does make it to area restaurants—primarily Ocean Boulevard in Kitty Hawk, but the picture he paints is true for all farmers.

There are three kinds of farmers in Currituck County and the surrounding agricultural areas: commodity farmers who plant hundreds of acres of cash crops—soybeans, sorghum, and corn are examples. There are large produce farmers who plant 25 or 30 acres or more of one crop—tomatoes, cantaloupe, peppers—and they usually plant five or six crops at a time. And then there is the specialty farmer—the farmer who plants an acre of arugula and fingerling potatoes, a quarter acre of Thai basil or specialty greens and has perhaps 20 heirloom tomatoes growing.

John describes a classic conundrum for farmers. He points to the field just south of Sanctuary Vineyard where the Newberns are doing their spring planting. “They do a great job with five or six crops,” he says. “Nobody can do better than they can growing those five or six crops. But they’re not worrying about 15 or 20 things. I’ll try 15 or 20 things because it’s not my living. It’s not my job.”

If there is a father of specialty farming in Currituck County, it’s Joe Dzwonek.

Joe, who taught math in Dare County Schools for 30 years, was known to his students as Mr. D. The chefs who worked with him called him Joe D, not even trying to pronounce his last name. If asked, he’ll define himself as a teacher, but teaching was only one part of what he did—crabber, farmer, teacher—and he knew just about everybody on the Outer Banks.

He’s retired now, from teaching and raising crops, but if there is a place to trace the notion that a specialty grower could supply local restaurants, Joe is where it begins.

A native of Currituck County, Joe still lives in a building that once housed his parent’s general story in Powells Point. “I grew up around a lot of farmers,” he says. “By the time I was 12, I was picking tomatoes.”

When local chefs first asked him about raising some specialty crops, he didn’t even know what they were but he knew he could do it. “I can raise anything,” he says.

Chefs came to rely on him because he would raise crops not typically handled by large distributors. “It’s items you don’t normally grow,” he says. “I raised mammoth basil, arugula (common now but not 10 or 15 years ago), baby beets.”

It was all carefully harvested and fresh. “I handpicked everything. Parsley I cut each stalk,” he recalls. “I’d pick it in the morning and deliver it that day.”

Some health concerns have slowed him down, which is why he no longer raises his crops, but he liked what he did and looks back on it fondly. “I enjoyed doing what I did or wouldn’t have done it,” he says. 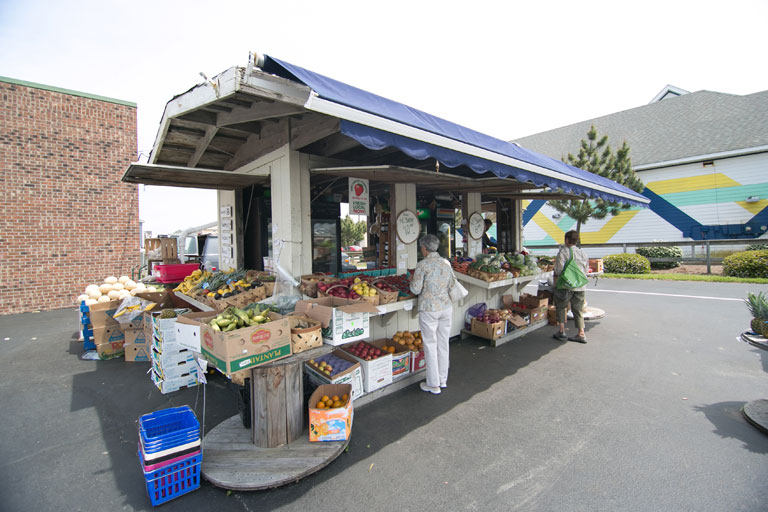 Fresher is better, which is at the heart of the farm to fork movement. Farmers, however, during peak season, don’t have time to pick the crop and sit at a roadside stand selling to customers.

They do have time, though, to work with Outer Banks co-ops and produce stands.

If there is a produce stand that is associated with the Outer Banks, it’s got to be Tar Heel 2 at Seagate North. Run by Ed Goninan for more 25 years, the stand is an icon of fresh vegetables and fruits with a few locally baked goods thrown into the mix. There is also usually shrimp from Stumpy Point available as well.

In partnership with his brother-in-law Joe Howington who runs the original Tar Heel Produce in Jarvisburg across the road from the Cotton Gin, the partners have developed relationships with area farmers. “They (farmers) started coming to us over 30 years ago when we opened up,” Goninan says. “Some of the produce is from Currituck. Some of it is from Pasquotank (Elizabeth City area).”

Whenever possible the partners try to sell local produce, but at the heart of any farm to fork concept is the seasonality of produce and whether it’s available even in season. “We buy local first and then we fill in with what we can’t buy local. As near as possible as we can get it,” Goninan says.

If Goninan and Tar Heel 2 represent a traditional produce stand and a relationship with the farmers, Coastal Farmer’s Co-op with it’s main location in Kitty Hawk is the newer way to work with farmers—although it is in many ways a throwback to a time gone by. 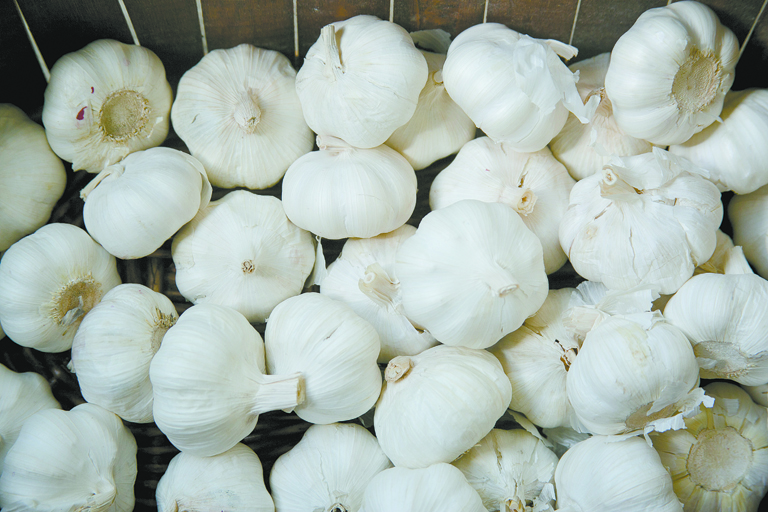 Fresh produce at the Coastal Farmer’s Co-op. Main store is in Kitty Hawk with visits to other locations.

Nicole Spruill, manager of the Co-op, has been working with farms, farmers and produce for a number of years and over that time she has come to understand the underlying business model that farmer have come to accept. “I realized there was a lot of farmland that was in commodities because there was a buyer for it,” she says. “When you’re looking at all the ins and outs of agriculture you have to have a buyer.”

The Co-op is a CSA—Community Supported Agriculture—a term that has come to mean local community support for local farmers. Realizing that the key to providing her resident clientele with the freshest locally grown produce possible was to first make sure the crops would be grown, she began contacting farmers in the area.

“I sought out a few partners and went to them with the opportunity,” Spruill says. What she presented to the farmers was a plan that would ensure a market for their crops.

“We have a market we can develop,” she told them.

She then worked with the growers to bring some different products to co-op customers. “We went in, ‘Ok, we have these markets. We have this CSA clientele. Let’s cover our basics. Now let’s step out of the box a little bit and do these specialty things,’” Spruill says. “Such as, I have  . . . farmers growing large quantities of heirloom tomatoes, eggplant, burpless cucumbers.”

Tar Heel 2 and Coastal Farmer’s Co-op are by no means the only places to get fresh local produce on the Outer Banks.

The Farm Market can be found in Powells Point for those vacationers on the road to the Outer Banks.

Green Acres Farm Market in Duck is owned by the Newbern family—Currituck farmers for generations, and in season, much of their produce comes directly from their farm.

Seaside Farm Market in Corolla is operated by the Grandy family, the same family that has runs Grandy Greenhouse and Farm Market in Grandy—probably one of the largest produce markets on the road to the beach.

All of them work to support local farmers and get the freshest produce to consumers. But they are working with local conditions. As Sam McGann, Executive Chef at Blue Point in Duck, points out, “Tomatoes in this area are only at their peak for six weeks.”

The essence of the farm to fork concept is often found in the creations of local chefs. We asked three area chefs—Pok at the Outer Banks Brewing Station, Michael Thomas at Ocean Boulevard and Sam McGann at Blue Point—to prepare three dishes for us to photograph for this article.

All three chefs were wonderful to work with, but they stressed the key to creating their dishes is based on using what is seasonally available. We took the photos in the late spring, so not every ingredient pictured will be available in the summer. Asparagus and rhubarb are spring crops; look for tomatoes, corn and squash in the summer. 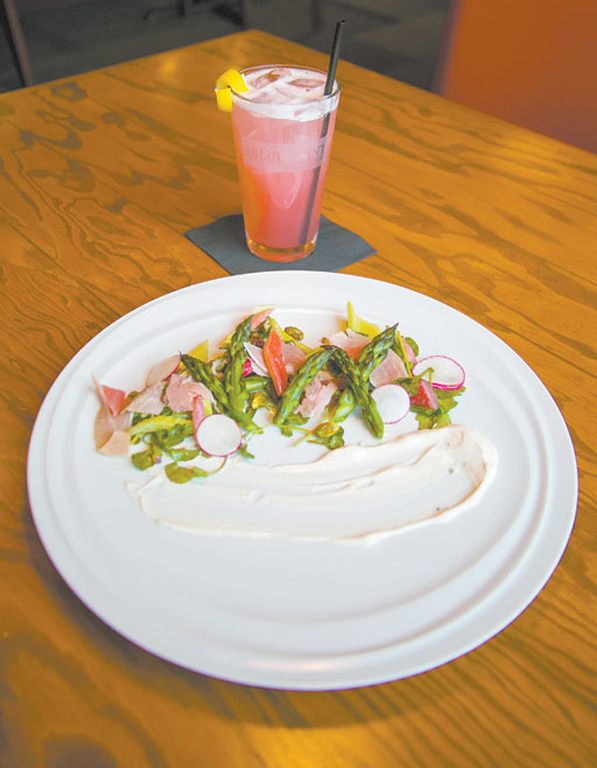 “It’s a puzzle. Farmer’s grow, but they’re not always the best at selling it. You have to be willing to commit to them (the farmers), yet at the same time they have to know that they have to have the product when you need it as well.”- Sam McGann, Co-owner, Executive Chef 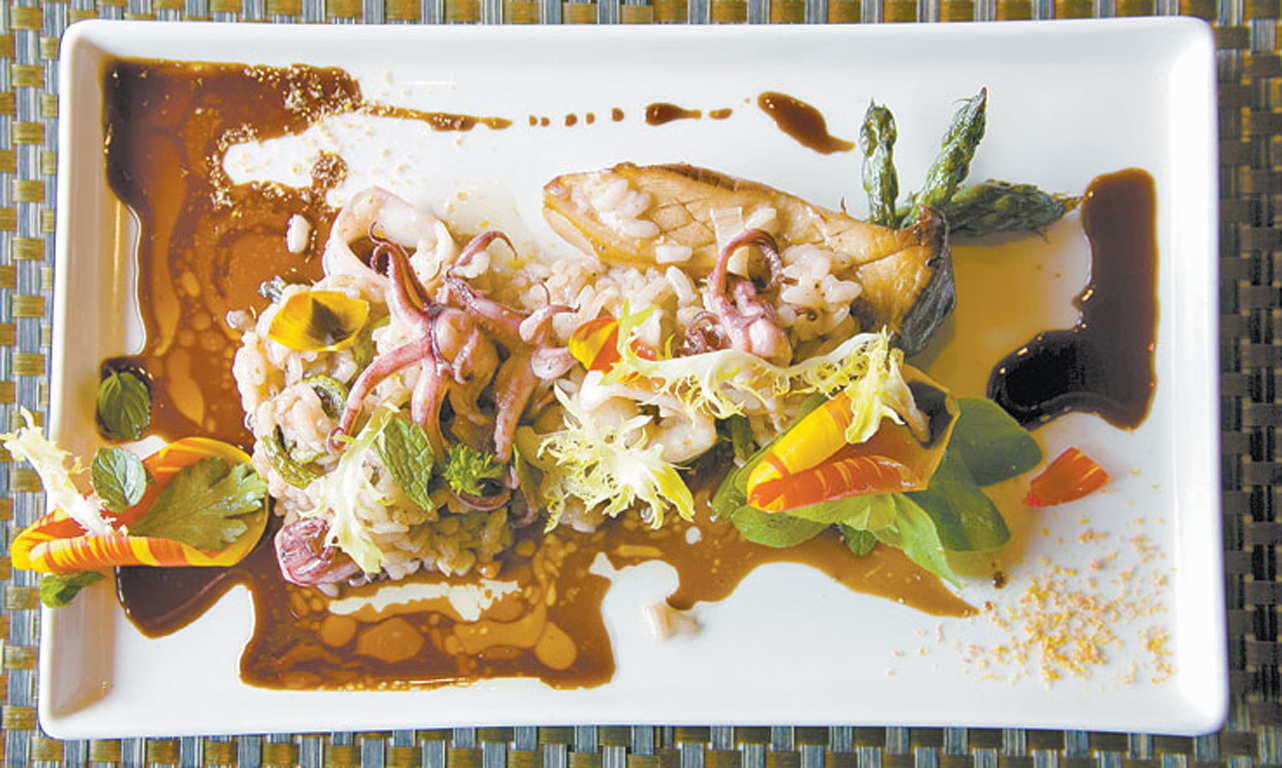 “You can always find cheaper stuff but are you going to find better stuff? That’s the quality thing. I’ll buy from anybody as long as it’s a great product. There’s a certain pride that comes with bringing your product in the back door and sharing it with people.”- Michael Thomas, Chef de Cuisine 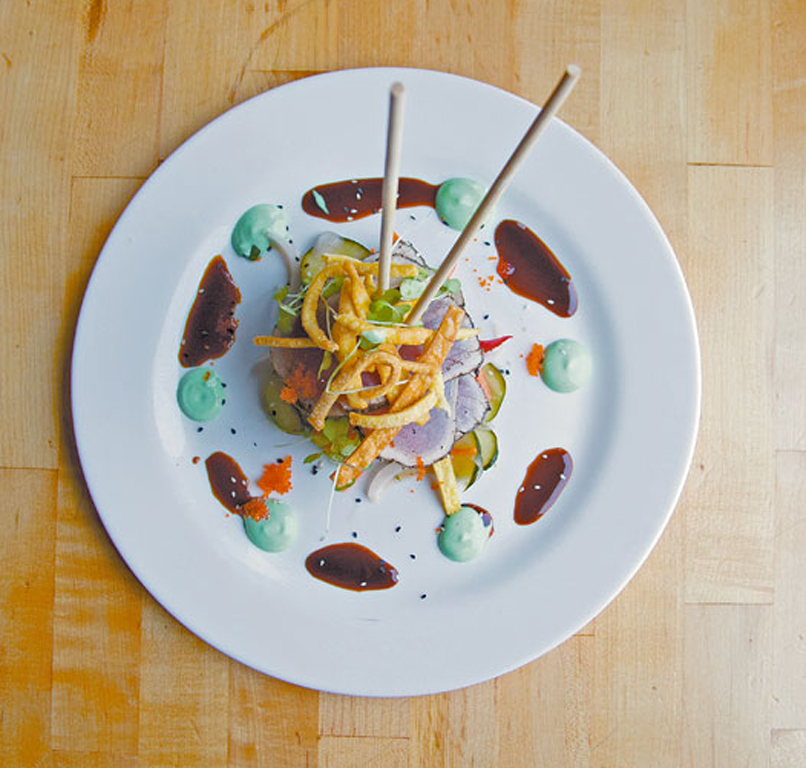 Pepper seared local yellowfin tuna with a Wasabi mayo and soy, honey and ginger reduction along with a cucumber salad marinated with rice wine vinegar. Local ingredients in the salad include cucumber, onions, pepper and carrots.

“We try to buy from the local community just to help the community out. With our new menu coming out, we have a lot with our local tomatoes featured.”- Chef Pok Choeichom