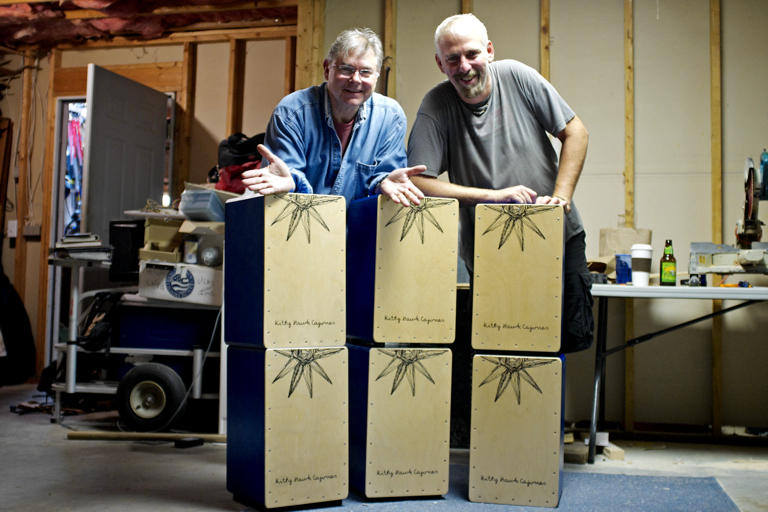 Bill Schreiner and Chris Whitehurst with a stack of cajons.

First there’s the sound, a resonant, rich tone speaking of primitive forests and endless plains. There’s a little bit of the rustle of a snare, giving it a slightly Caribbean or South American feel.

And then there is the sight of a Cajon—really just a big box with the drummer sitting on it, hands dancing across the face beating out complex and extraordinary rhythms.

Except it’s not really just a big box; it is a musical instrument, a wonderful part of the percussion family that allows a drummer to pick up and carry his music anywhere.

Local musician and sound board guru, Chris Whitehurst first saw a cajon on Ocracoke about three years ago. “It was just such a neat idea . . . a drum kit in a box,” he recalls.

Business partner and part-time Outer Banks resident Bill Schreiner remembers the first time he saw a cajon.  “My nephew’s band was playing at Elon and he knew I was a percussionist so he asked me to sit in,” he says. “ He had a cajon there.”

It was love at first strike.

It looks like a nice piece of wooden furniture—a simple box with a sound hole. But it is much more than that. As they started to develop the idea of building a cajon, Chris and Bill began buying drums. “They were terrible,” Bill says. “It didn’t matter how much I spent.”

“Even the most expensive ones were using really cheap materials,” Chris adds.

This past spring, Chris and Bill formed Kitty Hawk Percussion, putting in two months of research before the made their first drum–where to place the snares inside the box, what would be the best placement for the sound hole, what kind of wood would give the fullest sound.

Although it looks like a simple box, there is a lot that goes into it. The sides and top are made from the thickest plywood, the back a little bit thinner and the face is the thinnest plywood available, allowing it to vibrate as a drumhead. A series of screws holds the “drumhead” in place, but by varying the tension on the screw, the tone of the instrument can be subtlety varied. 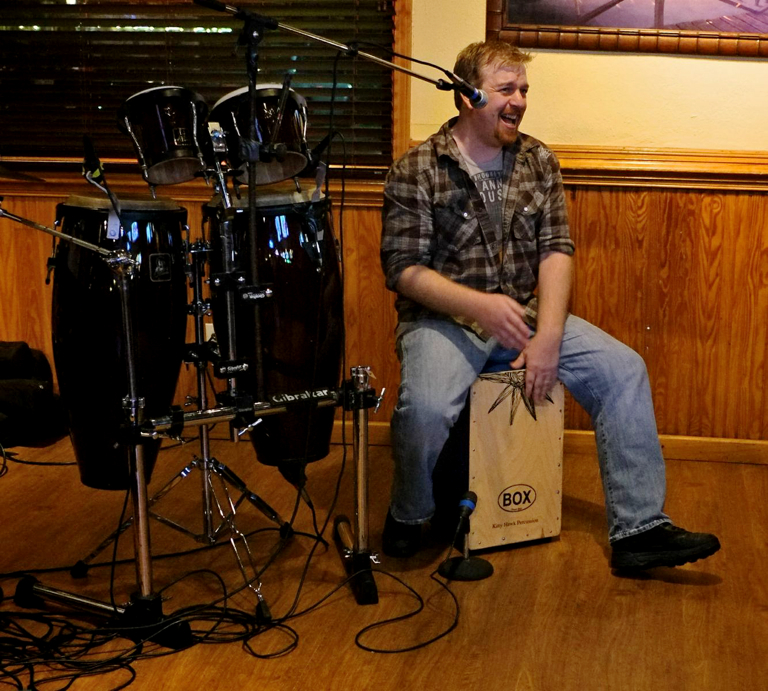 Whitehurst and Schreiner are bringing out a second model—a down firing cajon, with the sound hole on the bottom. The first prototype had just been completed at the time of our interview and the difference in sound between the standard cajon and the deep tone cajon, as they are calling it, is clear.

As the drummer leans back on the instrument, the sound is projected to the floor and then out. It is a fuller sound, with more bass resonance than the standard model, and by leaning the drum backward or forward, the musician can vary the tone and volume of the drum.

The result of their research are cajons that may be setting the standard for what the instrument can do.

Local musician Matt Calhoun of Watson and Calhoun is a percussionist, and he has fallen in love with the Kitty Hawk Percussion cajon.  “I’m a hand percussionist,” he says. “I feel like it (the cajon) gives me the sound I want in a hand drum.”

According to Calhoun there is a difference in the drums he has tried. “I’ve played other cajons and these are really a superior instrument,” he says. “It’s an instrument made by musicians, and it’s really obvious.”

Locally the Kitty Hawk Percussion cajon can be purchased at Kitty Hawk Kites or Corolla Surf Shop or ordered online at kittyhawkpercussion.com.