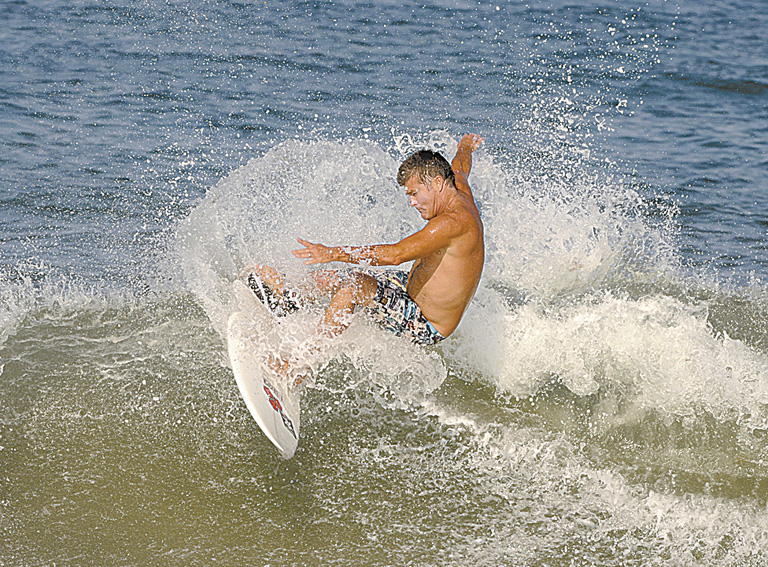 Barry Price, Sr. is the kind of surfer you want to emulate as you age. While quietly approaching 50, his level of surfing enthusiasm more closely resembles a teenage grommet than some of his older contemporaries. He is practicing the wise proverb: “While aging is inevitable, growing up is purely an option.”

He’s made the commitment to staying fit through cycling and use of a fitness ball, and believes that surfing with the next generation really helps maintain his youthful approach in the water.

When most of Barry’s cohorts are paddling out on a 9’ longboard and worrying about cholesterol and blood pressure levels, Barry is ripping on his trusty 5’8” four fin. He is more concerned with having a dry back-up wetsuit for his second session and the right wax for the current water temperature.

Having been a fixture on the Outer Banks for over thirty years, this Fayetteville native says, “I’ll chase surf up and down the coast when it’s good, but my heart will always be at the Avalon Pier.”

According to Barry, the Avalon break was where he matured as a surfer and first experienced bigger waves. “My aunt has an oceanfront cottage a few doors down from the pier, where my brother, George, and I spent a lot of summers,” he says.

He can see the pier from the front porch of his present home, and he’ll often surf there even if the sandbars are not so stellar. “I’ve spent so much time there and had so many good sessions that it’s become my go to spot,” says Barry.

While his older brother George was a mentor to his early surfing adventures, he was also influenced by Tom Rodgers, John McDaniels and Scooter Raynor to push his abilities. He cites Virginia native Wes Laine as one of the guys that opened his eyes to what could be done on the surf in his own back yard. “I loved it when Wes and the boys came down from Virginia Beach. They were always pumped on the surf and had great energy in the water.”

Happy to be in the water and respectful of other surfers, he has always let his surfing do the talking, and side-stepped the “my beach, my wave” mentality.

He affords his surfing lifestyle as a bartender and unpaid psychiatrist, and has dabbled part-time as a model and actor. Barry explains that in the mid nineties during a seasonal stint in California, he answered a newspaper ad for a model-actor, no experience needed. He aced the audition and has supplemented his income with that type of work since.

As a family man Barry has been blessed. His wife, Inga, has been the steering factor that keeps him from going adrift in his youthful passions. His sons, Dallas and Barry Jr., remind him how much fun it can be for young surfers living the beach lifestyle.

Dallas is the more dedicated surfer of the two, but Barry Jr. possesses the artful quality to show up and blow up during the best day in weeks then go undercover till the next swell hits. While it doesn’t happen that often anymore, seeing the three of them in the line-up together can be both awesome and frustrating. Firstly, because they all rip, and secondly, because when they’re done picking off all the best waves, there’s not much left over.

These days while waiting for his next bar shift or acting break, Barry can be found on his front porch observing his local break and enjoying life as our Outer Banks resident silver surfer.