St. Andrew’s: A Century by the Sea 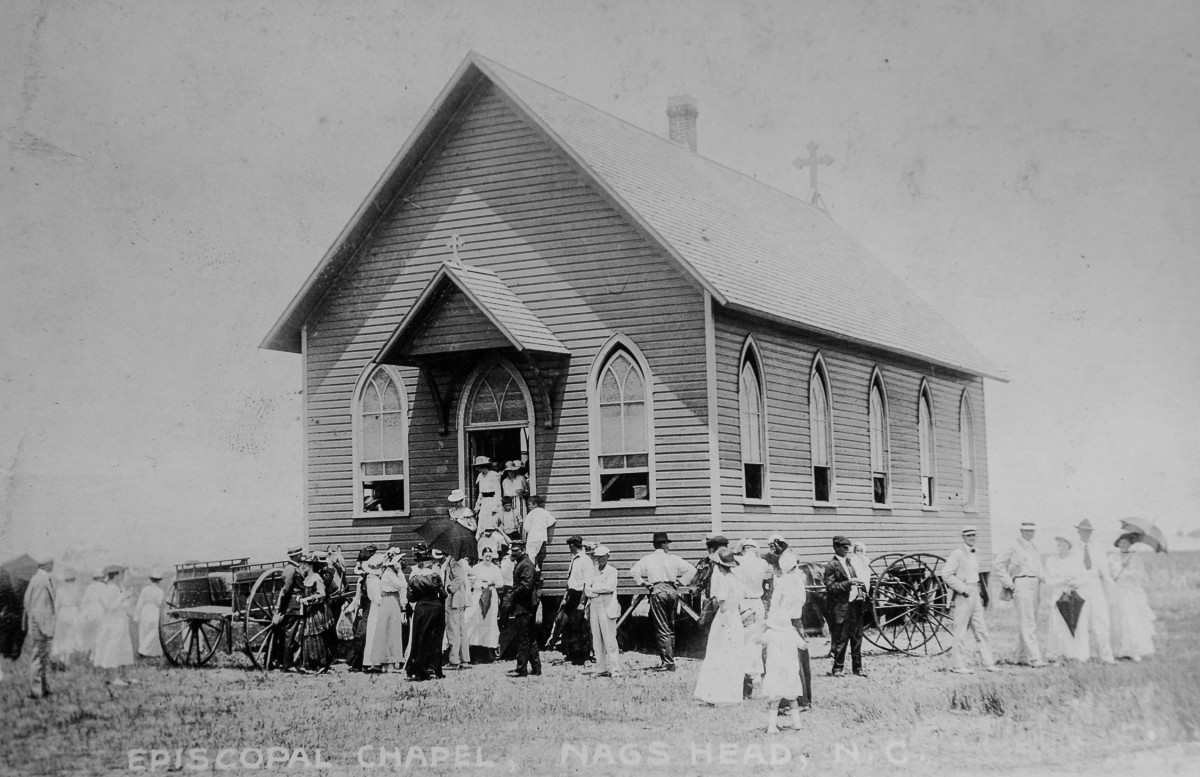 There is a panorama — possibly taken in the 1920s with a $2 Kodak camera — that depicts old Nags Head from sound to sea. It shows a virtually barren landscape that’s dotted with a handful of structures lining the far eastern and western sides of the island. In between the two is a dune that’s hard to identify by name so many years later, and a stretch of sand that appears completely uninhabited.

But pictures tell stories. And if you look long or hard enough, you can just make out the faint impression of a tiny chapel that’s firmly rooted in that seemingly desolate space. Taken out of context, it might easily be dismissed as an apparition, but it’s not. This is one of the few historic images of St. Andrew’s By-the-Sea — as it once was, and in many ways, how it continues to live on today. And this is only a small part of its story.

The Outer Banks has been considered a summertime vacation destination for much longer than many people realize. Wealthy families from nearby counties such as Perquimans, Chowan, Pasquotank and Bertie were drawn to this area in the early 1800s because of a widespread medical belief that breathing salt air and bathing in the ocean conferred health benefits — a particularly appealing notion since bouts of malaria regularly plagued inland communities during the hot, humid summer months.

Francis Nixon, a Perquimans County planter, is often credited as one of the first people to bring his family to Nags Head to escape the malarial season, and it’s said that others — or at least those who could afford it — quickly followed suit. 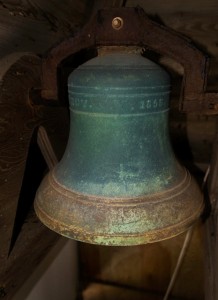 The cast iron bell that once hung in the original All Saints chapel went missing during the American Civil War but was returned to St. Andrew’s in the 1930s. Photo courtesy of Dave Huff / St. Andrew’s.

Traveling to the Outer Banks was no small endeavor at the time however. Those early visitors routinely arrived on large steamers that also carried everything from household slaves to livestock such as horses, cows and chickens. Even though the houses they constructed here were no match for the vast estates they left behind for a few months, it seems as though they tried to replicate all the comforts they enjoyed at home as much as possible.

That included constructing a small Episcopal chapel called All Saints House of Prayer in 1849. Though the exact location of the original All Saints is still unknown, it was reportedly in the vicinity of the soundside docks and Nags Head’s only hotel at the time. Perhaps even more importantly, the chapel was primarily used and maintained by those summertime visitors. When the season ended, the chapel also closed its doors until its congregation returned the following spring.

While early documents may remain spotty, it’s safe to say that many things changed on the Outer Banks with the advent of the American Civil War. Though it might seem odd to think about this area as a strategic military location in modern-day times, that’s exactly how these barrier islands were viewed once the war broke out and both Union and Confederate forces battled for access to all-important coastal shipping routes.

Within the first year of official hostilities, Confederate troops claimed the old Nags Head Hotel as their headquarters. That success was fleeting, however, as Union General Ambrose Burnside’s forces quickly gained the upper hand on nearby Roanoke Island. In an effort to hinder Union forces, the Confederates burned down the hotel before retreating.

The Nags Head Hotel wasn’t this area’s only structural wartime casualty by any means. By the time the war ended in 1865, All Saints (which would barely have been more than a decade and a half old at the time) had also been completely dismantled in order to construct houses for liberated slaves who increasingly sought refuge in Roanoke Island’s Freedmen’s Colony.

The families that frequented the Outer Banks during the antebellum era might not have been quite so prosperous after the war, but that didn’t stop them from eventually returning to their favorite resort town. And even though the physical location of All Saints was long gone, they continued to hold summertime services in the newly rebuilt Nags Head Hotel or in private residences for almost a half century.

All that changed once again when Congress finally approved wartime reparations in 1911. A petition for “a church at Nags Head” was approved, which awarded the Protestant Episcopal Church of East Carolina $856 – though when all was said and done, approximately $700 was available to rebuild the chapel.

At the time, the Reverend Dr. Robert Brent Drane, rector of St. Paul’s Episcopal Church in Edenton, regularly summered in Nags Head with his congregation. Not only did he apparently relish the idea of rebuilding the old chapel, he also contracted the well-known builder and Elizabeth City native, Stephen J. Twine — a man who was locally, and affectionately, known by many as “Old Man String.”

Twine’s reputation preceded him both then and now. In the early 1900s Twine had already begun to build a number of architecturally distinct cottages in Nags Head that he designed to weather the unique local elements, including a number of oceanfront cottages that still stand there today and are known informally as the “Unpainted Aristocracy.”

Twine hand drew plans for the new chapel according to Drane’s specifications, and by August of 1915 a contract was signed which stated that Twine would be paid $327.50 for his labor — plus an additional $6 for the chapel’s privy.

Less than a year later the chapel was complete. It was consecrated on August 6, 1916, but this time it bore a new name: St. Andrew’s By-the-Sea. 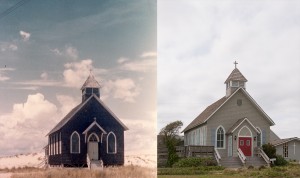 Left to right: St. Andrew’s after its 1937 move to the beach road, photo courtesy of the Outer Banks History Center; St. Andrew’s as it stands today, photo by Ryan Moser.

That might have been the end of the story, but the Outer Banks has historically been subject to all manner of storms that have shaped — and reshaped — this area, and St. Andrew’s future wasn’t exempt from those changes.

Like many other structures, the chapel weathered a number of storms over the years, but a particularly damaging storm in 1933 left St. Andrew’s in a low-lying swale that made it increasingly difficult to get to, particularly when the chapel was surrounded by standing water and congregants were swarmed with mosquitoes.

Inconveniences aside, Virginia Dare Trail (otherwise known as the beach road) was also constructed at this point, which effectively encouraged people to relocate to, or build on, the eastern side of the island in larger numbers than ever. With all these factors in mind, Drane proposed moving St. Andrew’s entirely.

His proposal was unanimously approved in 1935. During the winter of 1937, Twine supervised the chapel’s move approximately 680 feet southeast to its present location on the beach road — a feat likely accomplished with Twine’s preferred moving method of sticking black-gum rollers under buildings and working with a crew to hand roll them over the sand. To make it easier for parishioners to access the chapel’s front doors from the road, it was also rotated 180 degrees so that the altar faced west for the first time.

And there were other surprises in store. Almost miraculously, the large cast iron bell that once belonged to the original All Saints chapel was located on a farm in Nixonton, N.C., and returned to the Outer Banks. While it’s still a mystery how the bell was preserved for so long and ultimately ended up so far northwest on the mainland, such a remarkable find inspired the St. Andrew’s congregation to construct a chapel belfry while other repairs were being made after the move.

Twine, of course, oversaw those repairs and renovations as he always did. Almost two decades later he also made some other additions to St. Andrew’s, including new living quarters for visiting clergy (which unfortunately required covering up a large Gothic-style glass window behind the altar) and two large porches on the south and west sides of the chapel. In 1977 St. Andrew’s, and many of the original Unpainted Aristocracy cottages Twine constructed, officially became part of the Nags Head Cottage Historic District when they were placed on the National Register of Historic Places.

While St. Andrew’s has continued to grow over the decades, the chapel largely remains the same as it was a century ago. Year-round services are now held there each week in a space that can only be described as peaceful and cozy, with a vaulted ceiling that directs the eyes upward. But perhaps Florence Nash, Drane’s granddaughter, said it best as she looked back on the years she spent growing up by the sea in the shadow of St. Andrew’s:

“Across the road behind the cottage, in a surround of low dunes, sat St. Andrew’s By-the-Sea, plain as a seashell. Its walls were unpainted pine, fragrant in the somnolent air that came through the open windows with the glare off the dunes and the occasional faint hum of a car along the beach road. The altar vases were filled with sea oats. Sitting in that clean, quiet space, washed and dressed and momentarily subdued, we were on comfortable terms with God and Jesus and understood the meaning of blessings.”

The chapel can barely be made out in this old Nags Head panorama, circa 1920s. Photo merging and cleanup courtesy of Ray Matthews for St. Andrew’s centennial celebrations.