A Cast of Characters 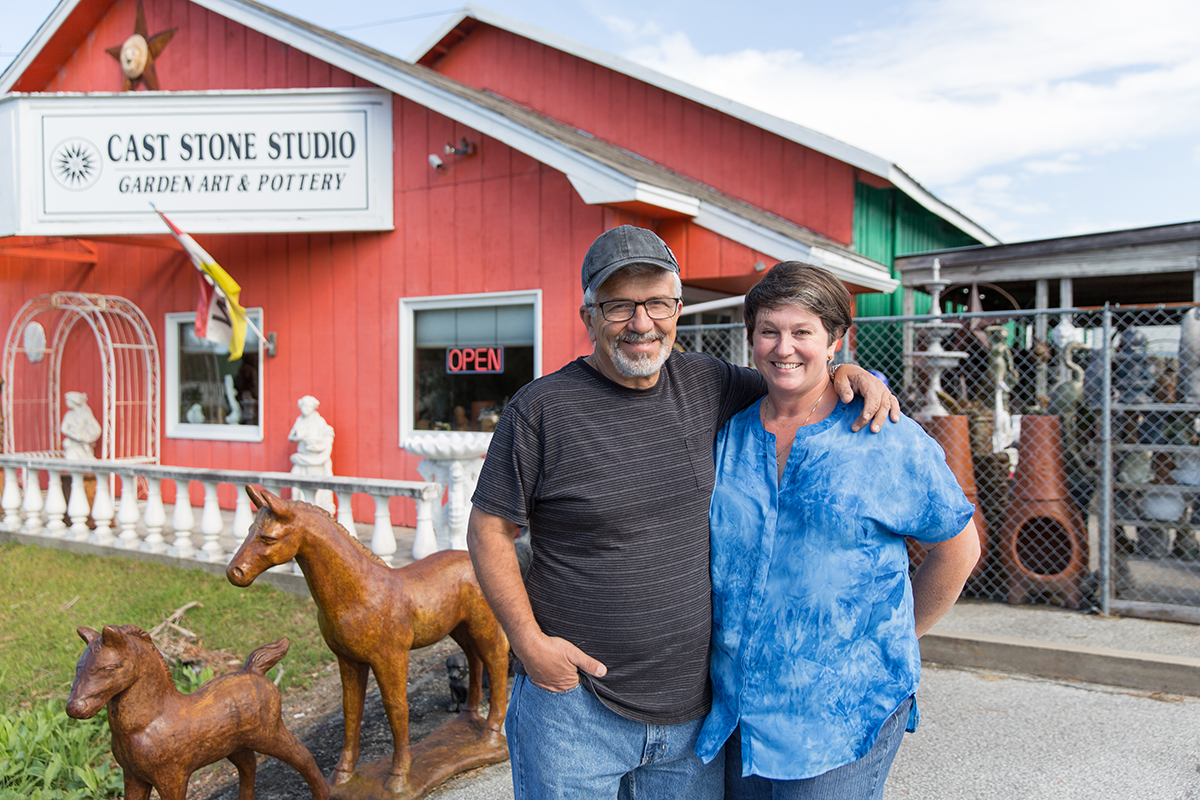 Bill and Jo Kiourtzidis in front of Cast Stone Studio in Powells Point. All photos by Cory Godwin Productions.

Just over the bridge in Powells Point is a place where the imagination can run free. 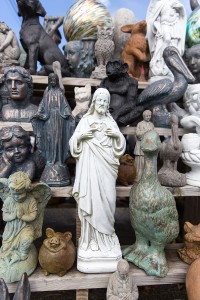 Rows of statues outside the studio.

Here, there are rows and rows of statues, pounds and pounds of concrete, and piles and piles of molds as far as the eye can see. This is Cast Stone Studio and for more than 20 years, Jo and Bill Kiourtzidis have been turning blobs of wet concrete into works of art that end up adorning gardens not just here locally but across the country.

These statues come to life right on site and are made from scratch, courtesy of Bill, Jo and their dedicated staff. From the mixing of concrete to filling the molds and putting on a finish, Bill and Jo have filled the building and surrounding grounds with thousands of concrete statues of at least 600 varieties – from mermaids and fairies to dogs and bullfrogs.

Creating molds in order to transform raw material into art isn’t something new for Bill, who moved here from Greece about 40 years ago. In Greece, he specialized in the reproduction of architectural pieces. Now, all these years later, he makes hundreds of molds out of latex rubber, fiberglass and plastic backings.

He uses them to create and re-create the statues that passersby can’t help but be drawn to as they drive along U.S. 158. “Some statues are originals and some we hire artists to make. Some are reproductions, but I make all the molds right here,” Bill says in his charming Greek accent. “Sometimes when I order something and the package arrives, I can’t wait to open it. I have to be the first one. When I am here doing this, I don’t feel like I’m ever really at work.” 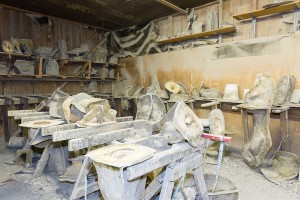 Some of Bill’s molds inside the back studio.

Piles of molds are stacked in the Cast Stone Studio building, a portion of which dates back to the 1800s and once served as a potato packing company and Grigg’s Feed and Seed. Bill says he knows where each mold is – well, at least the general area it’s in. And Jo laughs when she says that at nighttime, the building can give off a spooky feel. “You kind of wonder whether it is going to turn into a scene from A Night at the Museum sometimes,” she says.

Before moving into the building two decades ago, the couple started out making statues at their home and then opened a small retail store on the beach. “When I moved here from Greece, there weren’t any old buildings to reproduce, so we decided that maybe we could start making statues,” says Bill.

The couple sells these works of art wholesale to local customers, customers in other states and to local stores. “We have a lot of people stop in the studio. Some to browse but more to buy, and we have a lot of return customers who are looking for something specific. We always listen to what people are asking for,” Bill says, adding that there are definitely trends that come and go in statue design. Last year the trend was an Asian twist, other years it’s something else. 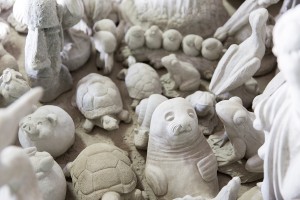 A variety of animal statues are popular at Cast Stone Studio.

“Benches and lions seem to consistently be big items and the ocean-themed statues are always in demand. But here at the studio, we take people around the world. We start here and take them to the Pacific, Asia, Europe. We have Greek designs and Italian ones, too.”

And really, Cast Stone Studio has molds for just about anything you are looking for. If you want a statue of something, they’re likely to have it. But you have to stop to see it.

“We have people who say they’ve been driving by for 20 years and have never stopped,” Jo says, laughing.

On this day, Bill seems most excited about a beautiful flower planter he salvaged from an old building in New York. He explains, step by step as he stands in his workshop, how he will make the mold for this and other treasures he has acquired. “The process hasn’t changed for a thousand years. We use different materials now, but it’s the same system.” 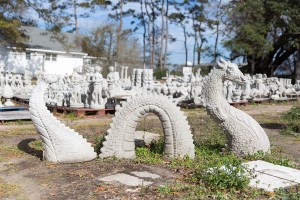 One of Bill’s fantastical dragons.

Pouring, he adds, is usually done during the warmer months, and winter is for making molds.

Bill has even reproduced many of the weathered statues that needed replacing at The Elizabethan Gardens and has made a miniature replica of the Virginia Dare statue to sell at the Gardens’ gift store.

Once the mold has dried, each statue is sanded and patched. Some will be finished, and some will be left in their raw state.

But whatever the end state is, they find their way into the eclectic mix that makes Cast Stone Studio a must see when travelling through Powells Point.

And maybe one day, Jo jokes, she’ll even take a statue home for her own garden. “We just have four pots in our garden. Every time I’m ready to take a statue home, I always think that maybe the next day someone is going to come in looking for just that one.” 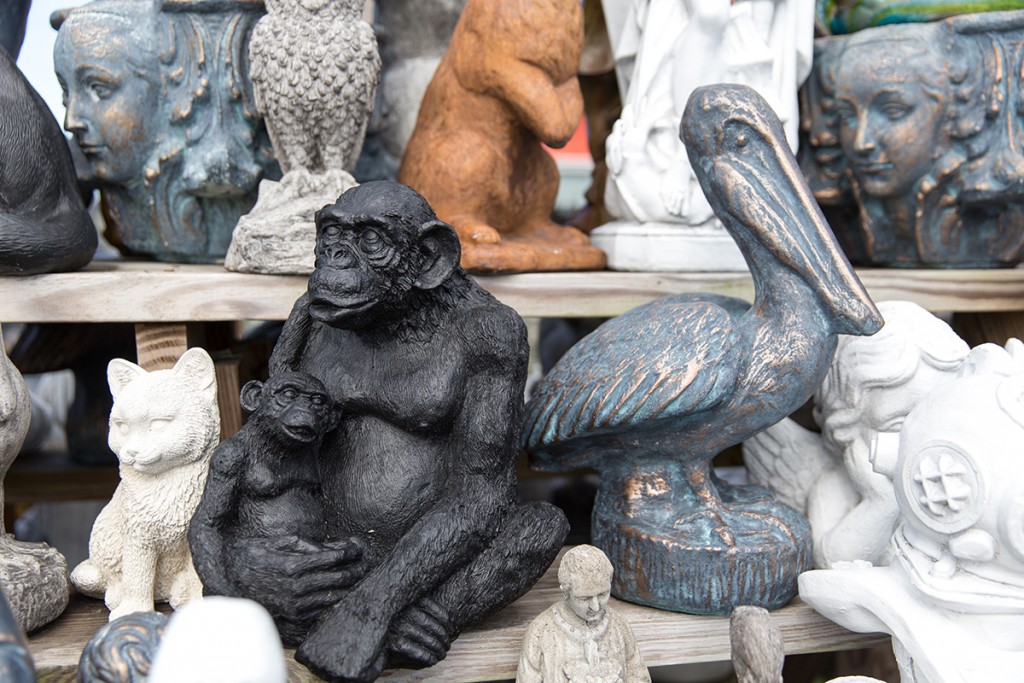 Some Cast Stone Studio statues are finished, and some are left in their raw state.