Artists of a Feather 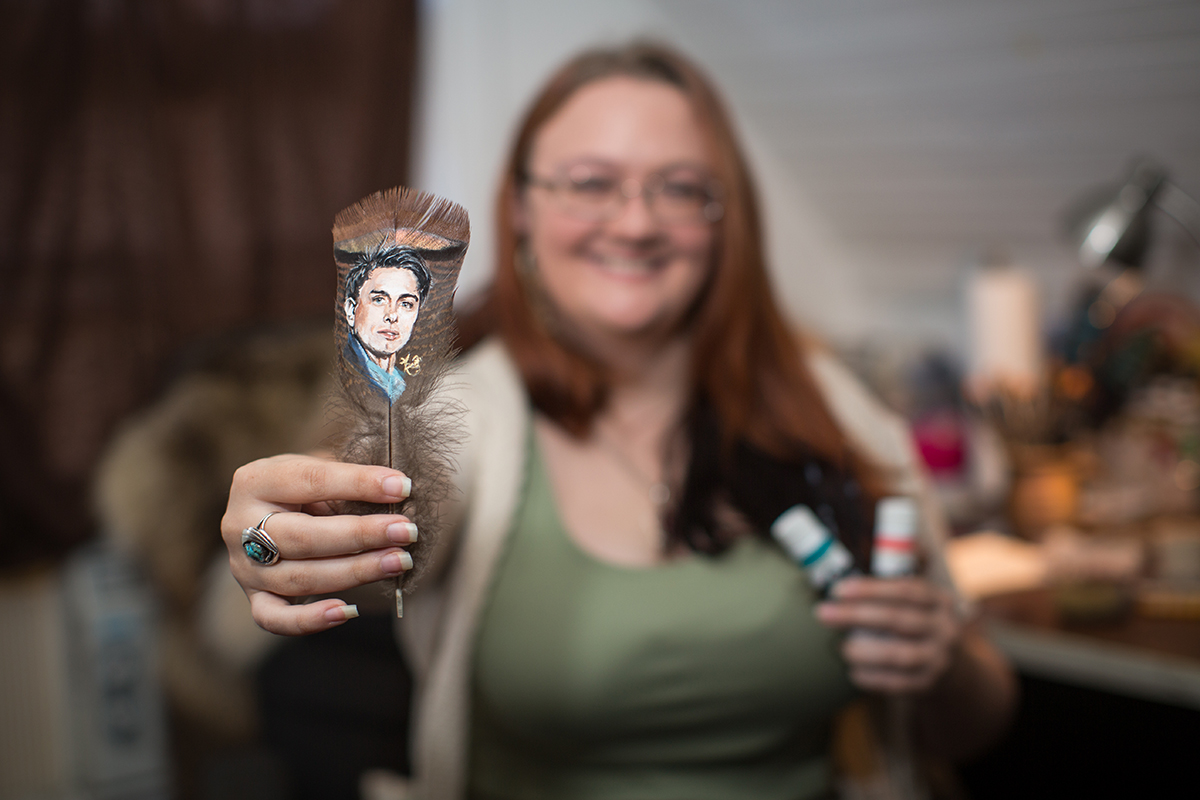 Amber Roth holds up one of her creations – a portrait of John Barrowman. All photos by Cory Godwin Productions.

In the category of unusual medium choices, “acrylic wash on turkey feather” ranks pretty high. The feathers only allow room for the smallest of portraits, require the lightest of touches to avoid splitting the individual strands, and can only sustain so many layers of paint before the weight of it destroys the feather.

But that hasn’t stopped Amber Roth of Red Tail Arts in Frisco from creating these beautiful works of art. If anything, she seems to enjoy the challenge.

“I attribute it to stubborn ambition,” says Amber. “A lot of people will say, ‘That must take patience.’ No. It’s stubborn ambition. It’s saying, ‘I will get this done and you will do what I say, paint.'” 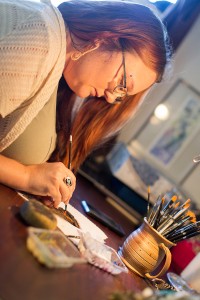 Amber concentrates on a new piece at her home studio in Frisco.

She points out that the paint does not usually respond to being bossed around.

“But I do it anyway. I figure one of these days maybe it will listen.”

Her process starts with just a spritz of spray-on matte finish on the backside of the feather to help hold it together. Even still, the feathers move as she paints so she has to be careful about the direction of her brush strokes. After a lot of experimentation in the beginning, she settled on acrylic wash as the superior choice for painting on feathers.

“It’s like watercolors and acrylics had a baby. They’re really, really fluid, but they blend like watercolors. Normal acrylics aren’t highly pigmented. So to get say, yellow, like what’s on that octopus, that would take five or six coats of yellow. The heavier the paint, the more likely your feather is to split. But the acrylic wash is thin and really highly pigmented, so if you put a thin line of yellow, it looks yellow,” says Amber.

While she paints, she finds music or conversation too distracting so she listens to audio courses ranging from biology to world religions. And occasionally her partner, Branden Kadunce, who is also an artist and understands how absorbing a project can be, reminds her to eat and sleep. 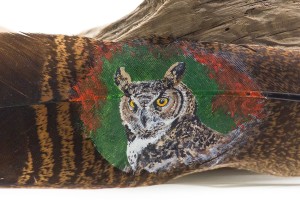 An example of Amber’s delicate brushwork.

Amber uses very small brushes, sometimes even ones she’s made out of feathers using a technique dating back to medieval times.

Depending on how well it’s going, a single portrait will take her anywhere from five hours to three days. She paints wolves, pelicans, hawks, sea turtles, foxes, eagles, hawks, spiders, snakes, cats, dogs, a blue-ringed octopus, and much more. A great deal of them are custom requests.

“People have a favorite animal, one that they’ve rescued, or a pet that has passed away,” says Amber.

She also occasionally paints portraits of people, like a recent portrait of David Tennant as the 10th Doctor from the Doctor Who television series, or David Bowie as the Goblin King in Labyrinth.

“I don’t do many of those. They’re usually a lot more taxing. With animals there’s wiggle room. If you have a fox and the coloring is supposed to be so far up the nose, and instead you do a little bit farther south, everybody still knows it’s a fox. With people, if I was to paint you and I get your eyes just a little bit too wide, it won’t look like you anymore. It takes more time,” says Amber. 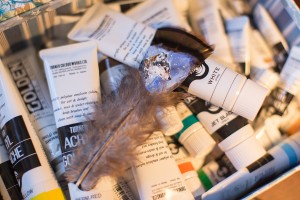 Thanks to the Migratory Bird Act, there’s a curious amount of legality that dictates which feathers she can use. Out of concerns over poaching, possessing or selling the feathers of many birds like hawks, owls, eagles, raptors, or even seagulls is illegal, even if it was simply found on the ground. That leaves Amber working with mostly turkey feathers she’s either purchased or bribed a turkey farmer out of, though she’s also used other legal domestic or game feathers like peacock and macaw. The legal quandary can sometimes be difficult to explain to people who want to pay her to paint on feathers they already possess.

“Most of the time people have found something and they don’t realize it’s illegal. Some people get really upset and take it as a personal attack when I tell them I can’t do it. They say, ‘But I just found it. Don’t you believe me?’” says Amber.

But most of the people who purchase her work are far more gracious, and Amber is quite pleased with the positive responses she’s received.

“The more that I put them out there, the more people just fell in love with them,” says Amber. 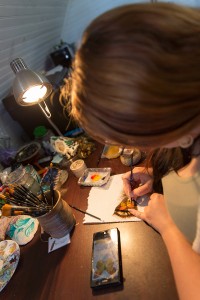 Amber’s advice to other budding artists is to put in a lot of practice and keep trying new things.

Though anyone can see that she is obviously quite talented, Amber credits hard work and practice far more than some innate skill. Before she began painting on feathers, Amber had never painted before.

“I started on little tiny chicken feathers. I went from doing tiny little flowers and very, very basic shapes to getting turkey feathers and trying to make them as realistic as possible,” Amber recalls.

Her advice to anyone who’s thinking about painting is to not be too scared to try.

“A lot of art is just learning that you can do it. There’s this weird notion that artists are born that way. You just have that bone in your body. No. All of us still put in a lot of practice. None of it comes easy. It’s that stubborn ambition. Decide that you want to do it and keep working toward it. Try a bunch of things. Don’t give up just because it’s not right the first five times that you do it. Keep going.”

You can see more feathers and Amber and Branden’s other work at RedTailArts.com.