The Many Faces of Jay Bowman 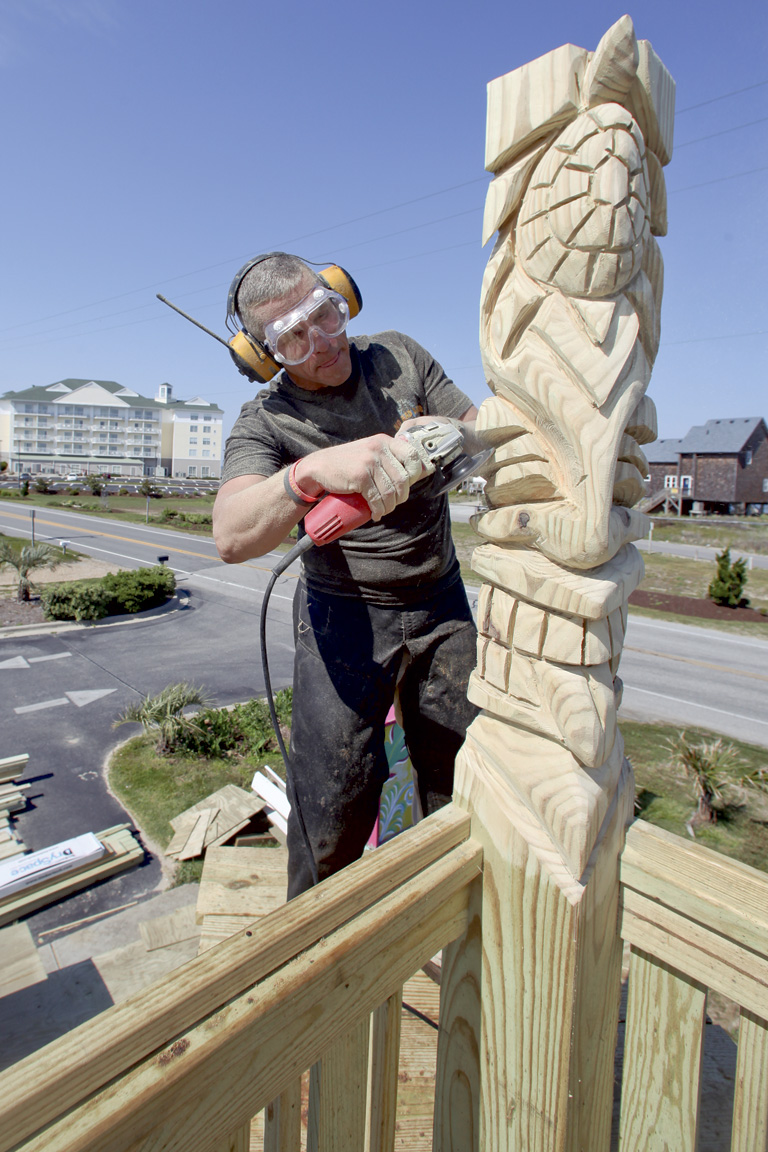 Jay putting the finishing touches on a totem at Rundown Cafe, Kitty Hawk.

Choosing Jay Bowman as a feature for our Fall issue was a no-brainer. He’s a real, honest-to-goodness renaissance man. His three professions are totally and completely unrelated, but wildly successful and fascinating nonetheless. He just so happens to be one of the most prolific wedding reverends on the Outer Banks, a partner in Outer Banks Bootcamps—possibly the hottest group fitness craze to hit the Outer Banks, and—in his spare time—he creates chainsaw art for an eclectic clientele.

I sat down with Jay over a cup of coffee in Southern Bean, just one of the places he has his tiki log carvings on display. Jay was already chatting with several people when I arrive. Between all of his endeavors he has a social circle to rival the town mayor’s.

We (my wife Kim, daughter Summer and dog Kahuna) moved here from Denver to semi-retire. I had served in three different churches over 25 years and needed a break.

I know this may seem like a personal question, but why did you choose to become a reverend?

I was in my junior year of undergrad. I had stayed up late one night and had a moment. I felt as if God was writing on my heart telling me to stop using art as a crutch and to go into the ministry…and that He’d take care of the rest.

What do you love most about being a reverend for weddings?

I love taking a very special moment and bringing life to that moment. Bringing them something that really and truly fits them as a couple.

How many weddings do you perform a year?

How did you get involved in Outer Banks Bootcamps?

Three and a half years ago I had gotten my gallbladder taken out, and I weighed 250-pounds. I just came out of that operation feeling like I didn’t want to be another fat, middle-aged guy. I heard about Matt Costa’s bootcamp, and I got in early when there was only about eight people. Matt asked me to be his partner, and you know, there was no paperwork, no lawyer. I just wanted to shake a man’s hand and have that be our contract. I lost over 60-pounds through that process. There are really no words to say how thankful I am for my friend Matt Costa.

Bootcamp has become highly successful. How has it grown?

We have about 200 involved right now—beginners, elite, kids’ camp, an all-ladies camp called the Steel Magnolias.

How would you describe Bootcamp to an outsider?

I would say it is a military style workout of adventure fitness where every workout is different. In the beginning we used to take pride in how many people would quit, but now we take pride in how many can finish. There’s a place for everyone—those who have never run before to the full Ironman. But it’s not p.c.; we’re not gonna hold your hand. We won’t baby you, but we’ll help you get there.

We might be pulling logs, swimming, digging in the sand, carrying sandbags… it’s a big playground that we live in!

To what do you attribute Bootcamp’s success?

There’s a lot of camaraderie; we’re a real team. There’s a shared pain towards a shared gain, and that bonds you in ways you don’t get now in our society. We kid about the Bootcamp Kool-Aid—you just get addicted. People are so excited and they get attached to each other… they’re finally starting to believe that there’s nothing they can’t do.

Friends that I have in Bootcamp tell me you’re somewhat of a motivational speaker. What do you say to them?

I draw two circles in the sand. One circle is your comfort zone, and the other circle is where the magic happens. I try to get them out of their comfort zone and help them believe that they can experience some of the magic.

What do you see for the future of Bootcamp?

Our main concern is that we stay true to who we are… keep the quality of training super high. We’re developing more coaches and trainers. Maybe eventually have one Bootcamp in Corolla and one in Nags Head. Knuckle Up in Kitty Hawk is our home gym.

So… the chainsaw art. When did that begin?

I was a double major in college—art and Bible. My wife Kim wanted to give chainsaw art to our family as a gift when were living in Colorado, but it was so expensive. I decided to try it. This was 15 years ago. I went to Home Depot, bought a cheap chainsaw, found a couple of logs, and gave it a shot. My first bear looked more like a rabbit!

By the time we moved here, part of our income was from doing the carvings and going to art shows. That first year we lived here I was at an art show in Manteo and someone told me about the Outer Banks Wedding Association, and how there weren’t many ordained ministers to perform weddings here.

Where can we see some of your work?

High Cotton, Rundown Café, Cap’n Franks, Red Sky Café, Southern Bean. The City of Chesapeake commissioned me to do a few projects up there. Now I do it more as I want to; not as I have to. And that’s better for me as an artist.

Where do you see yourself in five or ten years?

I hope I’m doing the same things as I am right now. I really love my life here, and that’s a good place to be, isn’t it? I want to be where the magic happens.

For more information about Outer Banks Bookcamp go to www.outerbanksbootcamps.com