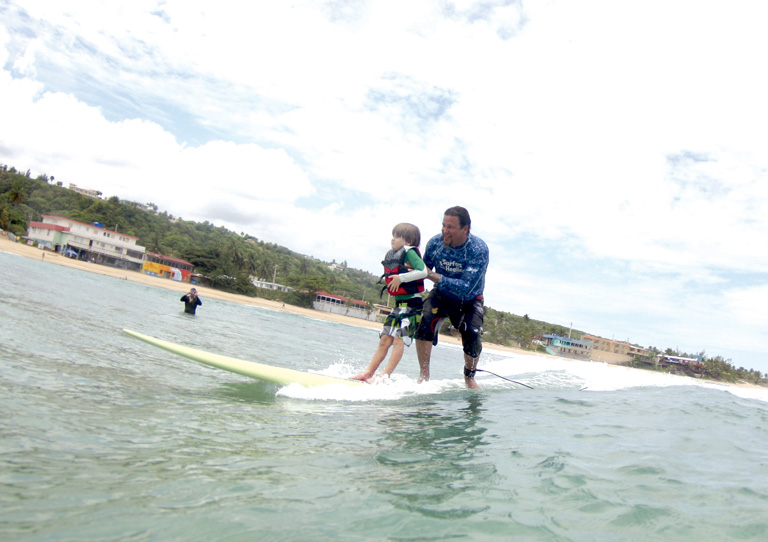 After their three-year-old son Isaiah was diagnosed with autism, Californian longboard champion Israel Paskowitz discovered that having his son on his surfboard and riding waves together had an extremely calming effect on him. Israel and his wife Danielle wondered if this alternative therapy would work for other autistic children.

Acting together, the couple founded Surfers Healing. Today, Surfers Healing camps are run across the mainland United States, Hawaii and Puerto Rico to give kids suffering from autism a day of surfing, in hopes that they might catch the ride of their lives.

Having volunteered as a surf instructor at the Virginia Beach camp for the last seven years, I was honored to join the team to participate in the Puerto Rican camp this year. The site for the event was at Playa Jobos, in the northwest coastal town of Isabella. The beach at Jobos has a perfect set up for this type of surf camp due to its rock outcropping and protected cove that produces a Waikiki-like wave on the inside sandbar.

Autism is a condition that has a multitude of symptoms and levels, and according to the U.S. Center for Disease Control it affects about 1 in 88 children. Some suffer mild dysfunction, while others are so severe that it’s as if they are in their own world and can become hysterical with the slightest sound or change in routine.

I can only imagine what some of these children’s perspectives must be like, donning a floatation jacket and heading out into the surf zone on a 12-foot board with a complete stranger.

This is where Izzy’s handpicked team comes into play. He chose watermen like Zane Aikau, J. Riddle, Pito Rodriguez and Shayne McIntyre, among others, who not only have the skills to tandem ride a sometime uncooperative participant, but can do it with a calming and almost spiritual manner that lets them connect with the child and helps them feel safe on a board out in the surf.

This is where the magic of the endeavor begins. The camper has to trust the instructor just being out in the water. Once that door is cracked a bit, it often allows an opening for the entire experience to flow. My history has shown me that even the most hesitant campers will do a complete attitude change after a few moments of gliding across an open wave. The most tearful child, reluctant to leave the beach full of family and comforts, can become the ones clutching hardest to the board or instructor, asking for one more ride after the allotted time has passed.

As Izzy has stated in numerous interviews, going surfing with these children is not a cure for them, but it definitely has a healing effect. It gives the children a chance to come out of their private worlds and connect with something as huge as the ocean. I have heard from some parents that their child now lights up at the mention of surf or surfing, or that a child who has never spoken a word in their life, suddenly claimed, “I like to surf.”

This therapy goes beyond those with autism. The parents and families get to interact together without the eye of society on them. They spend a day at the beach in a family-style gathering, comparing notes on behavioral habits, likes and dislikes, and other therapies that they might have tried. It can be a healing for the caregivers of these special souls, who deal with the daily struggle of autistic life.

For more information on how to get involved, or even make a donation to these free camps, please visit the website www.surfershealing.org.