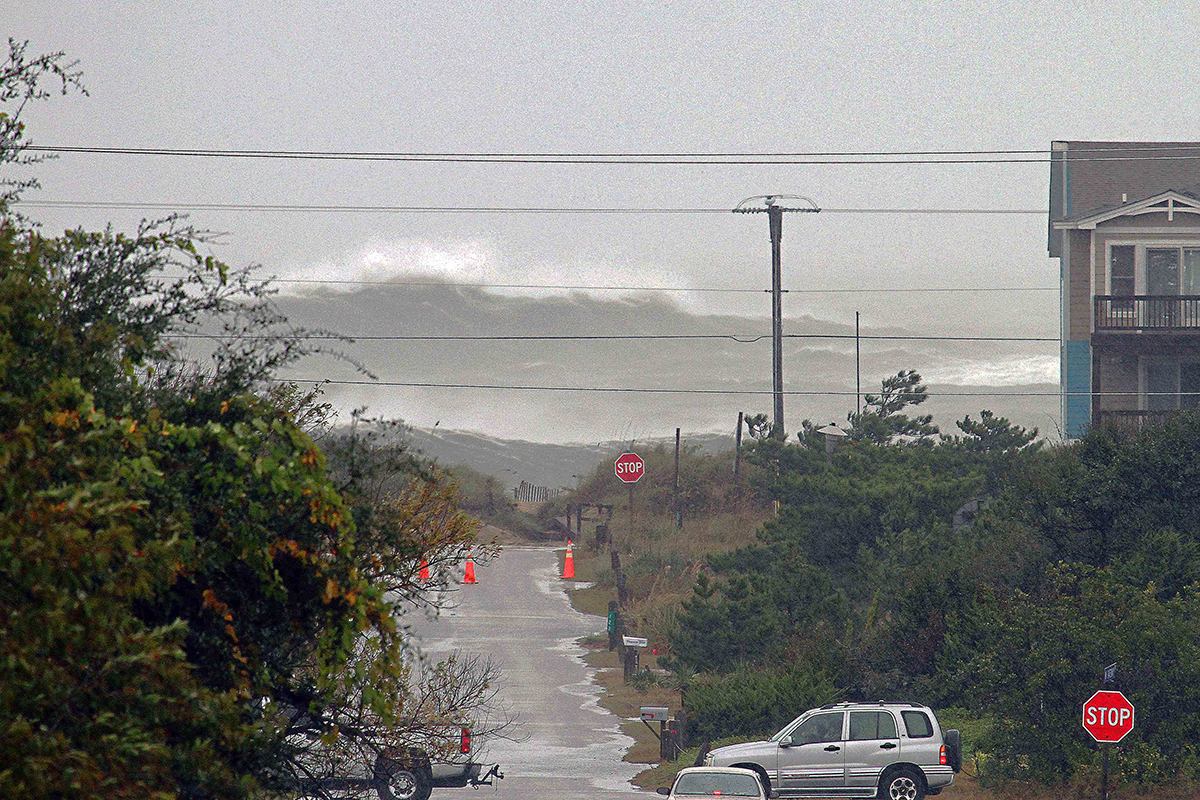 To say we are vulnerable to our surroundings on the Outer Banks would be an understatement. With the sound to the west and the sea to the east, we truly are one storm away from a community disaster.

That being said, aside from the headache of constant beach erosion, we have been extremely fortunate that Mother Nature has spared us a direct hit for some time now.

But every once in a while certain predictions will spur us into action. Businesses are boarded up and closed down, evacuations are made and sheer panic ensues at local grocery stores. And then, of course, there are all the headaches that come with all the rental cancellations at realty offices. Business owners can literally watch numbers decline daily as a storm churns closer to our coastline.

Well, it sure is…unless you’re a surfer!

You see, living here on the East Coast, especially on the Outer Banks, we surfers start licking our chops as we see the tropics light up with any sort of promising storm activity.

The thoughts of mass destruction, flooding and electrical outages are all buried deep in the back of our minds during this season. Work gets neglected, girlfriends become jealous of our obsession, and wives build forts on couches that double for what most married folks know as “the dog house.”

We study the weather religiously, often jinxing our own campaign with onshore winds. Truly, the anticipation of the track is almost as fun as the actual surf we score from these radical weather patterns. We compare notes with friends, siblings, wives, children, coworkers, fellow surf acquaintances, our grocery store clerk, bartenders and even total strangers.

We completely obsess at this time of year.

What most may not know, and I can vouch for as I have spent the last 20 years traveling the globe in search of perfect surf, is that once the conditions come together on the Outer Banks, it gets as good as any beach break worldwide. Perhaps it’s not the most consistent spot in the world, but it’s among the top three on the East Coast. And when the winds align properly with the groundswell produced by these storms, there’s quite honestly no other place in the world I would rather be.

But once these beasts pass, the aftermath can be brutal. We endure massive beach erosion, roof and siding destruction from heavy winds, intense flooding, spoiled goods from power loss, and the list goes on and on.

After the storm, surfers are left to pick up the pieces of our personal lives due to the hiatus we all shared before, during and after the storm. We’ll buy flowers for our wives or girlfriends, tear down the dog house on the couch, order new surfboards to replace the ones we snapped during our surf binge, and pop aspirin for the muscles we tore during those four-hour sessions. We’ll peel from the sunburn we took on, pick up shifts to make up for the void in finances during our “sick days” and, well, just entertain normality as a whole after sharing what we all live for—even if it was only for 72 hours at best.

Businesses reopen, visitors flood back in, yard work consumes us and depending on the storm’s track, we all get back to living.

But surfers possess that itch we cannot scratch as we continue to obsess about future storms since we still have a few months to host world class surf in our backyard. If conditions are right, surfers from all over the world fly in hoping to catch classic Outer Banks conditions. Filmmakers and photographers also arrive to document these epic swell events as the East Coast becomes a media darling for all of the regional, national and international surfing publications and websites.

There is a small window in which even the local folk can catch the wave of his or her life, have it documented by a world class photographer and end up in one of the better known surf publications, maybe even on the cover. Retired professional surfer and Outer Banks legend Jesse Hines landed on the cover of Surfer magazine getting barreled in his own backyard. Making it on that magazine’s cover is considered one of the biggest accomplishments achievable in the surfing world, and something all of us surfers have dreamed about since we were little surf grommets.

I bid you all a very safe season and give proper thanks to Mother Nature for keeping life exciting on the Outer Banks, both in and out of the sea!