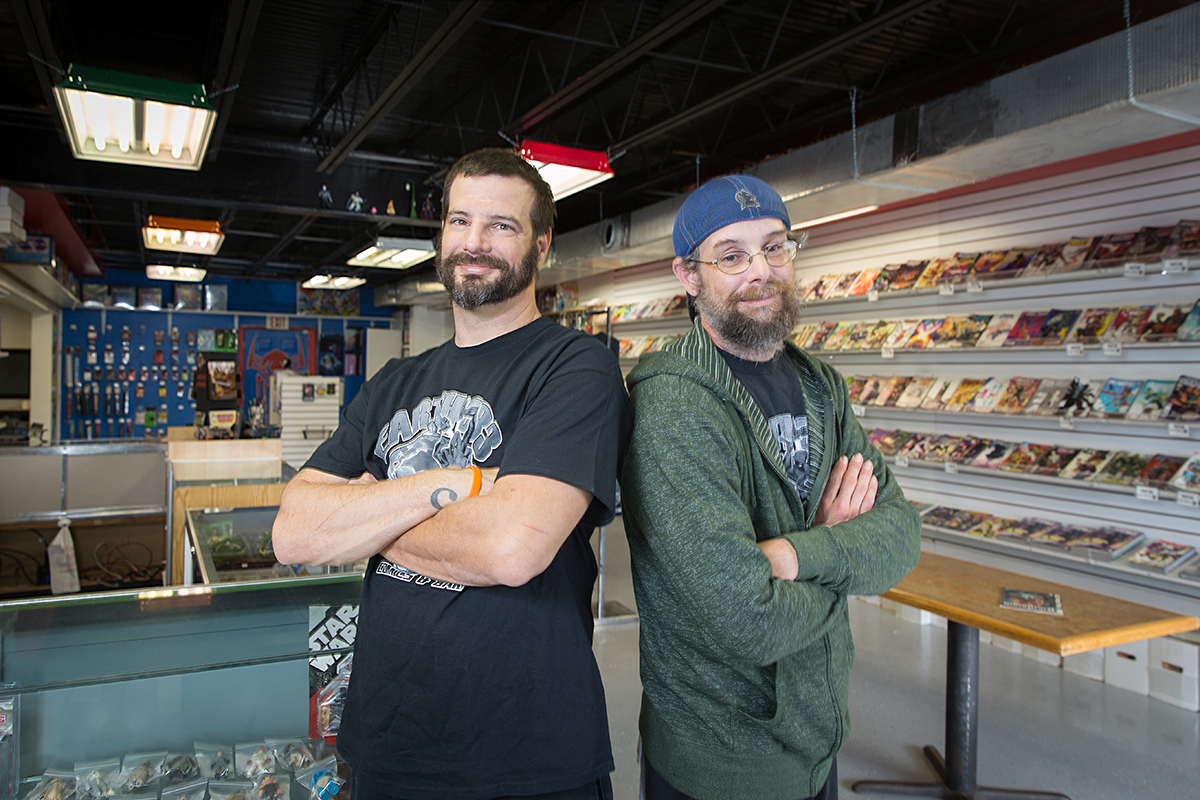 Duf and Turtle stand guard over the lair of Earth 383 in Kill Devil Hills. Photo by Cory Godwin Productions.

When Duf Franco opened Earth 383 Comics & Games in Elizabeth City in 2003, he had no idea how to run a business. These days, he probably still doesn’t, but that’s what makes the place great.

“Thirteen years later I’m still figuring things out,” admits Duf, who prefers to think of Earth 383 as less of a business and more of a clubhouse or a community gathering place where people can share their passion for all things comics, tabletop games and other assorted geekery. (Even the store’s name reflects that – 383 is Duf’s name as it would be typed on a phone, paying homage to the numbered multiple universes found in comics and signaling the fact that once you enter the shop you’re entering a particular new universe with its own distinct rules.) 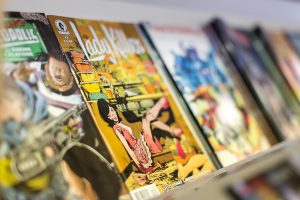 “We keep stuff on the shelf, but it’s never been a hard grind on the business end of things,” Duf says. “We’ve never been really worried about making money or paying the bills.”

For not being worried much about the money, they seem to be doing just fine anyway. Since starting with a storage locker full of back-issue comics and nearly worthless Pokémon toys, the business has expanded into three stores: the inaugural location in Elizabeth City, one in Florida that’s operated by Duf’s nephew, and one right here in Kill Devil Hills that’s managed by John “Turtle” Moore. The KDH store just recently moved into a bigger shop next door at milepost six on the bypass, with more room to spread out and play games.

The games are what really make Earth 383 more of a clubhouse than a store. On any given day you’ll find a dozen or more people gathered around one of their card tables playing games like Dungeons and Dragons, Warhammer or Magic: The Gathering. The demographics range from 13-year-old kids learning the rules for the first time to 45-year-old hardcore gamers who have literally been playing for decades. It’s not uncommon for people to keep gaming well past midnight, long after Duf and the other employees have left. There’s an “honor jar” on the counter so gamers can pay for the snacks and drinks stocked up in the refrigerator, and before he goes home, Duf will usually ask the last customer there to lock up and leave a note if anyone comes in to buy something. He even let a few people use the store on Christmas Day. 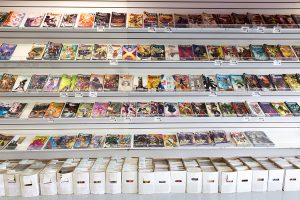 Something for every comic book fan can be found at Earth 383. Photo by Cory Godwin Productions.

“We are a refuge for those who don’t have anywhere else to go,” Duf says.

That may sound strange at a time when, thanks in no small part to the movies, the popularity of comics is surging. But Duf still frequently encounters what he calls “the stigma of the comic book store” from people who tend to think of comic book stores as places for loners. What Earth 383 actually is, is a place where people can find community, conversation and acceptance.

“There aren’t a lot of places for kids to hang out that’s a safe environment and doesn’t involve alcohol, drugs or drama,” says Duf. “You walk in the door here, and whether we know you or not, someone will greet you and you’ll be immersed in a conversation. Everybody is welcome here. Family is where you fit in.”

It’s also a great place to leave the problems of the real world behind for a while, and get a much-needed dose of fantasy.

“We don’t do politics. We don’t do religion. We do comic book arguments. We do make-believe stuff,” says Duf. 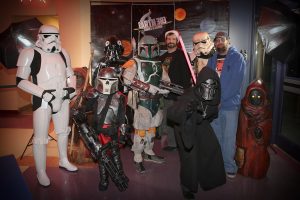 Duf, Turtle and friends at the premiere of Rogue One in Kill Devil Hills. Photo by K. Wilkins Photography.

Besides the gaming groups, tournaments and comic book arguments going on inside the store, Earth 383 regularly holds outside events such as the movie premiere nights at R/C Kill Devil Hills Movies 10. When a new highly-anticipated comic book or sci-fi movie is released, they host an early premiere party in the lobby with trivia, costumes, photo backdrops, artwork from local artists inspired by the film and, when appropriate, Stormtroopers. When the show’s over, everyone’s invited back to the store to discuss the movie. This year they’re looking forward to holding premiere parties for eight different movies including Justice League, Spider-man: Homecoming, and Guardians of the Galaxy 2.

Duf says that things are a little different now compared to when he opened the first Earth 383.

“We’re a little more focused on the money now. We’ve gone into online shopping. We’ve got employees now instead of volunteers,” he says.

In the beginning, the business was called Duf’s Playhouse, because that’s exactly what it was. Fueled by friends, volunteers and the very last of Duf’s savings, he wanted it to be a place where people could come together, talk for hours about things they’re passionate about, and play. These days the business has gotten a lot bigger, but Duf has managed to keep that clubhouse vision after all those years. Selling comics is still less the purpose of the place, and more the way to keep the lights on so that people can keep on playing.

“Without all the people who hang out here, there wouldn’t be a here,” says Duf. “So it’s more their store than it is my store anyway. I’m just the one who’s responsible for the bills.”