Cottage Courts—Still a Part of the Outer Banks 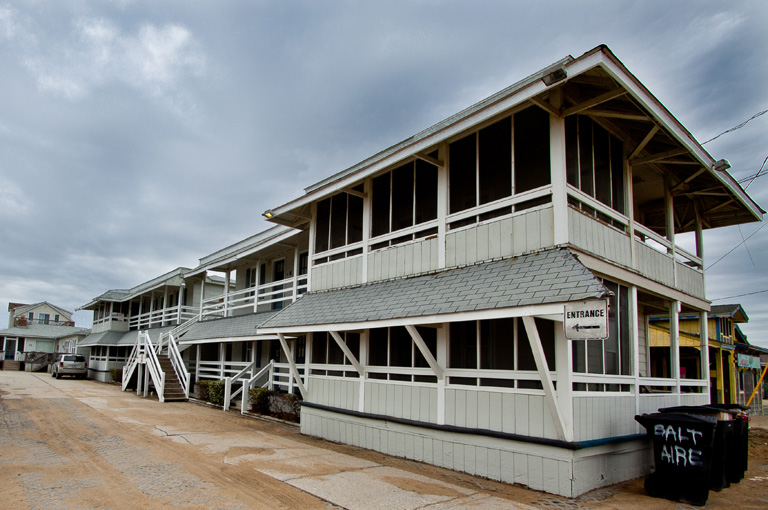 Two bedrooms—maybe three—a small kitchen, small living area and memories of the perfect vacation—the Outer Banks cottage courts contained everything needed for a magnificent one or two weeks at the beach. Not luxury, by any means; no room service, no one came in and picked up the room everyday—but oh, the memories. .  . the knowledge that shoes were forbidden, the beach was at your doorstep or just across the road and the air was filled with the scent and sounds of the ocean.

Jay McCarty, who owns Saltaire in Kitty Hawk with his partner David Simpson, sees the business as a way to preserve the memories of his vacations on the Outer Banks. “My first time on the Outer Banks, I was 9-years-old in 1969,” he says. “My family came back almost every year since 1969. Back then everybody had a screen porch, but not everybody had air conditioning. We spent a lot of time outdoors, so we didn’t really notice.” 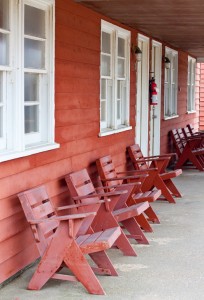 Chairs lined up for comfort at Sea Kove in Kitty Hawk. Photo by Kati Wilkins.

At one time, the cottage courts were the equivalent of the eight bedroom homes that now line the beach from South Nags Head to Carova. When families came to the beach, they booked their week at Saltaire, or their neighbor to the south, Sea Kove, or maybe Cahoon’s Cottage Courts in Nags Head.

The cottage courts were more personal, more intimate than any beach box could ever be. “We have families that have been coming here since before I bought the place,” Bill Foreman, owner of Sea Kove, says. “Same week, same room every summer. They really get to know each other, because there’s others booking the same week. It’s like a little community.”

McCarty, who lives in northern Virginia, echoes that. “Whenever I’m down there, I talk to guests who know the same families, the same people, who have been coming there 30, 40 or 50 years.” 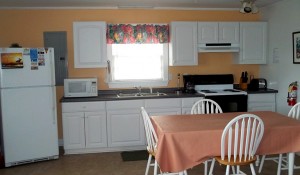 By modern standards, the cottage courts are pretty primitive. They are clean, very well maintained but, “You can do your own dishes,” is the way Renee Cahoon, owner of Cahoon’s Cottages puts it.

Cahoon’s Cottages, immediately adjacent to Cahoon’s Store in Nags Head, may be one of the oldest cottage courts on the Outer Banks. Indicating the original one-story cottages, Cahoon says, “They were built in the late 1940s. The construction is concrete on gravel.”

Cahoon’s parents bought the business in March of 1962. “A week before the Ash Wednesday storm,” Cahoon notes, and in many ways her experiences growing up were typical of cottage court families. “My sister and I grew up running up and down the beach,” Cahoon recalls.

Foreman’s son, Shea, had a similar experience, but adds to it, “I had a different friend every week,” he says. “And then they would come back the same week every summer.”

These are mom and pop businesses in the truest sense of the word—families raise their children on the premises, and even when there is a partnership, it’s not big business. “It’s kind of a love affair,” McCarty observes.

“We don’t compete with a beach box or hotel,” he says. “We’re emotionally driven.”

It may be the emotion that binds many of the guests together—and becomes part of the lives of the owners. “We’ve gotten to know so many of these people over the years,” Foreman says. “They’ve become friends, family friends.”