A panoramic view of the Community Square. Photos by Daniel Pullen Photography.

Ocracoke Island bears witness to a complex and unique history – one of Native Americans, pirates, shipwrecks and small yet significant roles in the Civil War, World War I and World War II. Indeed, the island boasts more than 200 buildings and homes that are listed on the National Register of Historic Places. And while each home and building tells its own rich and salient story, the heart of the village – the place where villagers have gathered for news, goods and celebrations for nearly a century – is the cluster of five historic buildings across the harbor from the Ocracoke Lighthouse known as the Community Square. 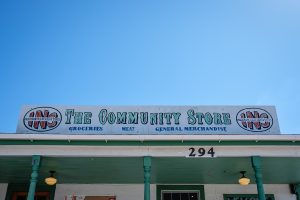 An image of The Community Store today.

Although several small merchandise stores were maintained in different areas of the island over the years, Amasa “Mace” Fulcher opened The Community Store on the north side of Cockle Creek in 1918. And while the building has changed form and location due to both storm destruction and island growth, this gathering place remained open for 88 consecutive years until 2006. Mace carried baking goods, cheese, beans, hardware and Sunday clothes, and she even kept one child and two adult caskets on hand at all times. In 2014, The Community Store reopened under the management of Joseph Ramunni and Lauren Strohl. The store still sells a variety of goods – everything from cast-iron pans, fishing rods, toys and organic produce – and it still maintains an Old World charm. It is not uncommon to see men sitting in rocking chairs around the potbelly wood stove in the center of the store, or sitting on benches underneath the covered porch. 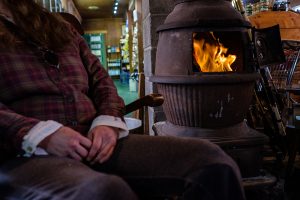 The potbelly wood stove at the center of The Community Store.

In 1930, Will G. Willis built the Willis Fish House and Dock. The structure became a hub for local fisherman, and it was the first place on the island to sell blocks of ice. Later, it became a store where Ocracoke children would sip milkshakes and jump off the docks into Cockle Creek to escape the summer heat. Today, it houses the Ocracoke Working Watermen’s Exhibit and the office for the Ocracoke Foundation. Its docks are still used as a launching point for local charter boats and tours to nearby Portsmouth Island. You can spend the day shelling there, or touring the pristine village that has been abandoned since 1971.

In 1936, The Ocracoke Power and Light Company was formed. A generator plant and office were built next to The Community Store, along with a plant where ice was produced and sold. Ronald “Conk” O’Neal was a company employee, and could often be seen on the plant’s roof pouring ice over the generator on hot summer mornings to prevent overheating. For decades now, the building has been home to both Kitty Hawk Kites and the Fudge and Ice Cream shop, run by longtime resident Mark Justice. The line for treats is often long but worth the wait. 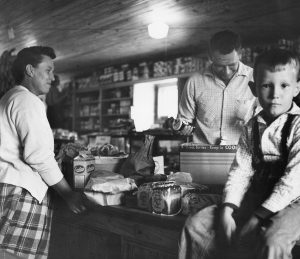 Iona Teeter and her son, Carl Teeter, purchase sundries from Montford Garrish at The Community Store in 1955. Photo courtesy of the Ekstrom Library.

Also in 1936, a small commercial structure was built at the edge of the Willis dock. It was used as an office where residents could pay their electric bills, and after a public water system was introduced in the 1970s, their water bills. The space will soon reopen as Trixie’s Fineries, a studio and shop for artist Karen Rhodes.

The fifth and final historical structure that makes up the square is the William Ellis Williams House, circa 1900. The building was moved twice before it came to its final resting place on the waterfront of the Community Square. Recently, it became the “Coyote Den” of beloved island musicians Marcy Brenner and Lou Castro. It’s a place for music lessons, jam sessions and concerts featuring old island stories and songs in the “Hoi Toide” brogue for which Ocracoke is famous. A portion of the building also houses the Ocracoke Civic and Business Association’s Visitor Center. 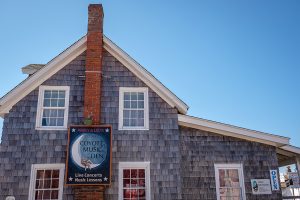 Ocracoke’s Community Square is the heart of this maritime village. It is a main hub for annual festivals, including Ocracoke’s famous Fig Festival and Blackbeard’s Pirate’s Jamboree, where you can watch a reenactment of Blackbeard’s final battle – complete with cannons – from the square’s docks. The restoration and revitalization of this historic property is not only vital to the survival of Ocracoke, but to the maritime heritage of the Outer Banks. 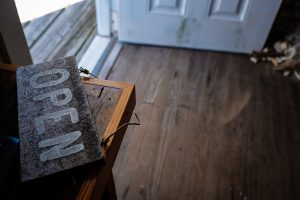 To this end, the 2013 purchase of this iconic maritime heritage site by the Ocracoke Foundation kicked off a multi-faceted initiative that aims to restore the five National Historic buildings and the docks, improve water quality in Silver Lake Harbor, maintain water access for maritime businesses and the public, preserve open space, enhance the local economy and eventually to create a permanent community endowment. With both long and short-term goals in mind, the Ocracoke Foundation is currently working with The Conservation Fund and TowneBank to continue protecting – and preserving the rich history of – the 80 to 117-year-old structures that make up the square for many future generations to come.

Visit ocracokefoundation.org for more information, for links to their Stories from the Square video series, or to add a financial contribution to help save this irreplaceable island asset.