You Are Now Entering The Glen 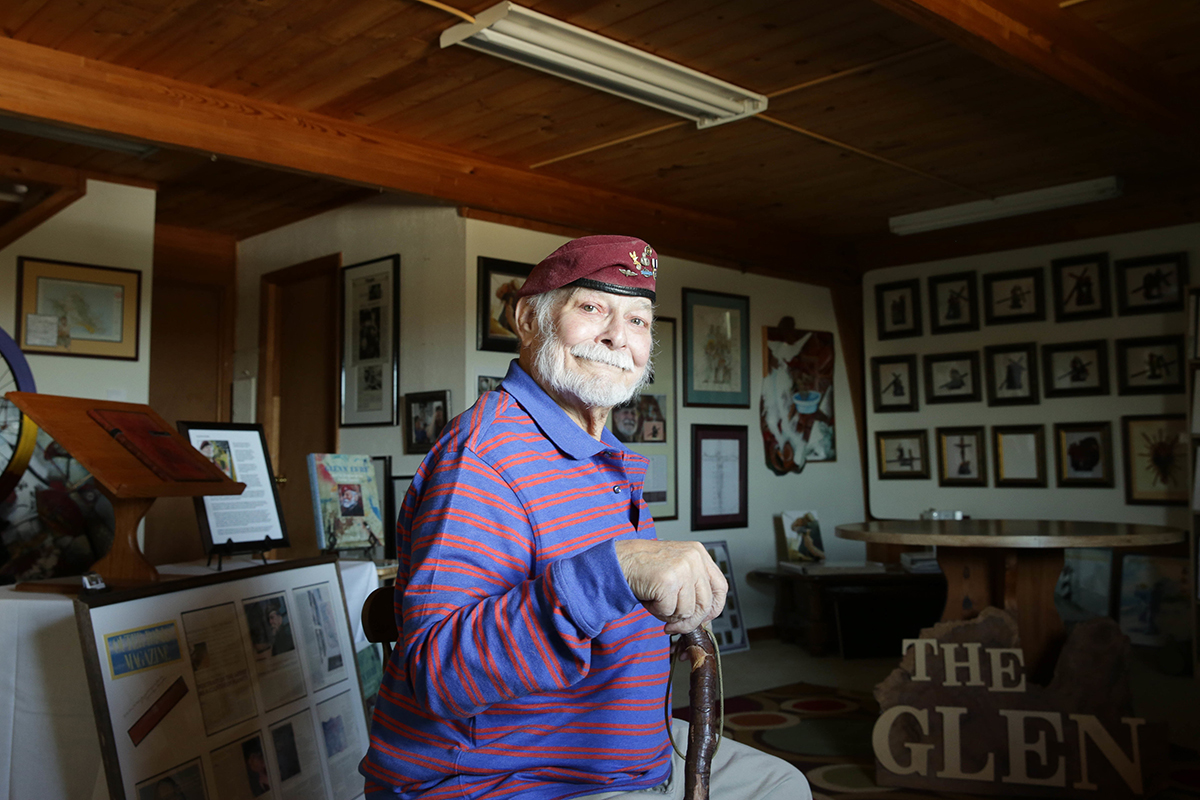 Artist Glenn Eure with the library of his work, collected by his wife, Pat. Images by K. Wilkins Photography.

Ask anyone who knows him (and probably a lot of people who don’t), and they’ll all agree: Local artist and longtime Ghost Fleet Gallery owner Glenn Eure is a force of nature. And, at 85-years-old, he’s still a natural charmer who can light up a room (or even more simply, one person’s face) in no time at all.

“Let me ask you something – and I know it’s early in the day,” Glenn starts with a twinkle in his eye. (You may know where this is going, but it’s still worth the wait.) “How many people have told you today how absolutely gorgeous you are?”

Timed right (as it inevitably is), it’s enough to elicit a blush from schoolgirls to seasoned matriarchs – and it’s pure, unadulterated Glenn as he basks in his element: bringing joy to everyone he meets by any means necessary.

“This gallery’s been my life,” says Glenn as he pauses to warmly greet – and strike up a lengthy conversation with – yet another first time visitor who’s happened to find their way into his orbit. “But until recently I didn’t realize how much we’d done here in the past 40 years.”

“Glenn’s led a lot of lives,” adds his wife, Pat, as she describes a decade’s-long evolution that’s seen him go from being known as the “barefoot painter” to the local artistic “ringleader” – and (most recently) has people referring to him affectionately as the “grandfather” of the Outer Banks’ art scene.

But that’s just the basics. Which is partly why this year, for the very first time, Glenn Eure’s Ghost Fleet Gallery will open its 22nd annual Artist Self-Portrait Exhibition on April 1 in conjunction with a special unveiling of a brand-new permanent addition: The Glen.

Puns aside, The Glen is an extensive gallery library that’s been a labor of love for Pat over the past few years. Filled with everything from sketches and canvases to photographs and framed articles, the library documents the diverse work Glenn’s done over the years (including designing Kitty Hawk’s Monument to a Century of Flight and hand carving the 15 Stations of the Cross for the Holy Redeemer by the Sea Catholic Parish) – but, as Pat observes, the heart of the library lies in the binders that fill several steel bookshelves’ worth of space. 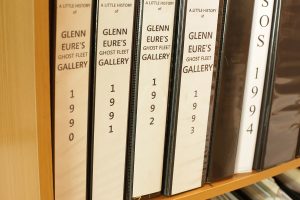 Binders filled with everything from sketches to photographs chronicling the gallery’s history.

“Back in the early days I started keeping things in binders – invitations for events, letters, photos, copies of articles…all kinds of documentation. I just thought of them as reference,” says Pat. “It wasn’t until much later that I began to realize how significant they are.”

The binders (which are all titled “A Little History of Glenn Eure’s Ghost Fleet Gallery” plus the year) begin in 1973, and from 1986 on there’s at least one binder on display per year. Pat even created several specialty binders, such as the one she made for Glenn’s 80th birthday that contains some of his writing.

The library itself is housed on the second level of the gallery – which functioned as an extension of their hanging space until 2014, and has been affectionately referred to as the “second dimension” for years (why? “It just sounded a lot better than the upstairs gallery,” explains Pat). Once it officially opens, visitors can climb the narrow curving staircase to leaf through decades’ worth of ephemera, learn a little about Glenn’s early life (he was born in Honolulu and earned a B.F.A. in printmaking after retiring from a long career in the Army) – and hopefully walk away with some sense of how important the arts have been to this community…and for how long.

In fact, the oldest thing in the collection is an editorial by North Carolina journalist W.O. Saunders, in which he wrote that the Outer Banks was rapidly becoming a haven for creative individuals. The year that was published? 1935.

“Where artists gather, people come,” says Glenn with a laugh. “This isn’t just about me. Really it’s a gallery history – and in a way, it’s also a history of art on the Outer Banks.”

Pat agrees. “You don’t ever really know how to go about getting older,” she says. “But you do learn a couple of things along the way. One is that evolution doesn’t go in a straight line – it’s more back and forth. And it never stops. When I started this project I didn’t intend for it to be public, but I think it’s important to have your history accumulated in one spot. To get organized and ready for the next day.”

Together, Glenn and Pat can reminisce for hours about years worth of events, gatherings and – especially – the people who have been so important to them and our community. Names like Denver Linley. Lillian Rosenthal. Ann Sandburg. Chester Smith. Russell Turner.

“There are huge stories behind the smallest things,” Pat says as she recalls another name, another part of the narrative that branches out from the gallery’s walls. “The library inspires people to think about that.”

But when asked if they can pick out a favorite – or most exciting – year from their collection, Pat doesn’t hesitate. “Next year,” she says firmly. “That’s what we’re looking forward to.”

“It just continues to get better,” Glenn adds. “Every, single day.”