The Evolution of Art 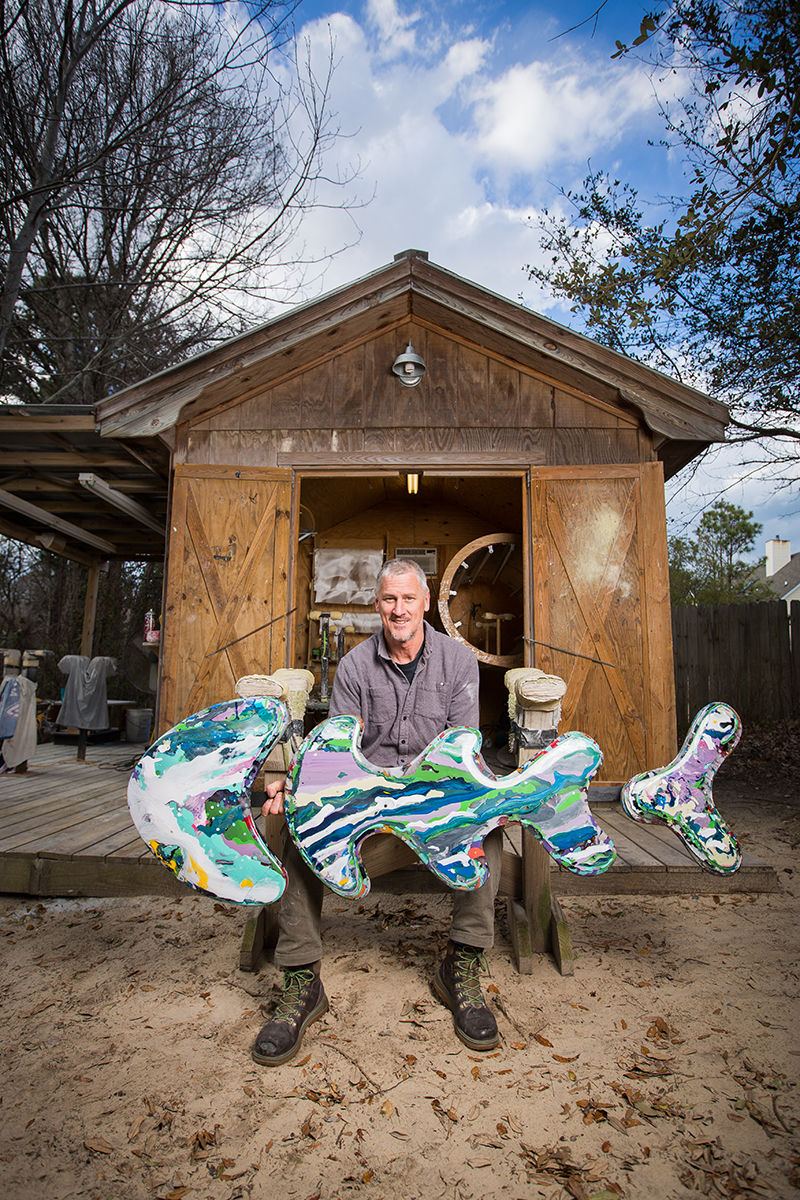 Outside his shaping “shack,” Mike Rowe holds one of his sculptures made from excess surfboard resin. All photos by Ryan Moser.

Watching local artisan Mike Rowe move around one of his (several) Southern Shores work spaces is a bit like watching a mad scientist at play.

In the midst of so many rapid-fire comments, it can be hard to tell when he’s explaining an aspect of his process or when he’s simply thinking out loud – mostly because the difference between the two can seem pretty negligible.

“There’s definitely a method to the madness,” Mike explains as he temporarily pauses for a moment of self-reflection. “But I don’t care to be all that organized. Sometimes the 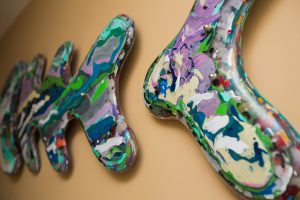 A close up of the fish sculpture that hangs inside Mike’s doorway.

Mike, who’s been building surfboards on the Outer Banks for more than 30 years, is no stranger to the local crowd – many of whom primarily know him as one of the premier shapers in this area – but the “stuff” he’s talking about today is slightly more off radar…even to those who have known him for decades.

In a nutshell, that “stuff” is glass artwork, but don’t let that bare-bones description fool you: It’s like no other glasswork you’ve ever seen, or even imagined. These are pieces that could only have come – fully sprung – from Mike Rowe’s imagination. To say that they’re original is an understatement. To say that they’re just the beginning of something larger only starts to do them justice.

There are perhaps unlimited ways to tell the back story to this, but Mike points to the day of his high school graduation, when he packed up all his things immediately after the 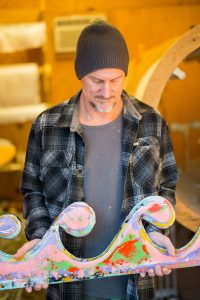 Mike with one of his wave pieces.

ceremony and moved to the Outer Banks in search of surf. It wasn’t long before he started apprenticing under Mickey McCarthy at New Sun Surfboards on the beach road, learning everything he could about board building. Mike started his own brand (Hooked Surfboards) in 2001, and eventually started creating his own custom boards from start to finish in 2010.

Then came the eureka moment for his current artwork. During a trip to New York City in the winter of 2015, Mike encountered the work of renowned artist Frank Stella at the Whitney Museum of American Art. Awed by Stella’s large-scale abstract sculptures done up with riotous colors and welded metals, Mike walked away inspired to try something new.

“It was like a light bulb went off there,” Mike says. “I thought, ‘I work with all these colors, too – why couldn’t I make something like that?’”

Prior to this epiphany, Mike had been throwing away colorful blocks of resin for years. In the process of glassing a board (as he quickly demonstrates), some of the excess resin drips down into a board-shaped metal tray and hardens. Thirty to 40 boards later the pan is filled with a thick kaleidoscope-like block of resin – or what Mike used to call “the waste.”

Mike can laugh about that term now, while also lamenting the years’ worth of material he so blithely tossed away – though prior to encountering Stella’s work at the Whitney he had begun saving some of that leftover resin…with only a vague notion that he could find a use for it at some point. 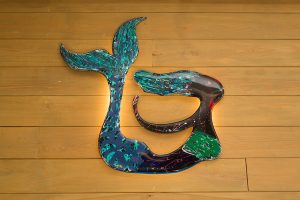 Using all the same tools he already had in his arsenal for building boards, he began experimenting by cutting out rough wave shapes with a jigsaw and hand sanding them until they gleamed. One laborious experiment led to another, until a friend caught wind of what he was working on and commissioned him to make a sculpture of a mermaid.

“That was different because it was so specific,” Mike explains. “Using the recycled resin I only have a three-by-six-foot block to work with, and that restricts the size. For my first commission I had to get creative again. I cut a mermaid mold out of plywood and poured colored resin in to get the exact look I wanted. But even with the poured pieces, I still have to shape them after they dry.” He laughs. “Either way, it can take a lot of time.”

And at the end of the day, Mike’s latest endeavor isn’t only relatively new; it’s also something that he’s been keeping close to his chest.

“I’m just getting it figured out,” says Mike as he goes into the reasons why he’s made it a point to kept his glass sculptures off the grid in terms of social media and has even shied 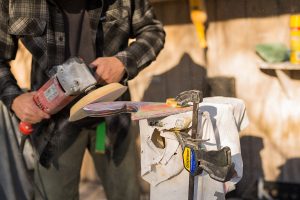 Mike hand sands every piece until they gleam.

away from spreading the news more widely through word of mouth – at least so far. It’s not that he’s trying to hide it, but more that there’s something intensely personal about this new work that’s made him feel a bit more guarded.

“I don’t want to be expected to do this on anyone else’s terms,” Mike says firmly. “I’m just doing my thing, and a lot of the time I don’t know what I’m going to get – in a sense it’s very Jackson Pollock like that.”

To date, Mike only has five large-scale finished pieces, along with numerous wave silhouettes in assorted lengths, but he recently started working on a mold for his second

commissioned piece (a four-by-eight-foot bluefin tuna), and his work will be on display at Urban Cottage in Duck starting this spring. 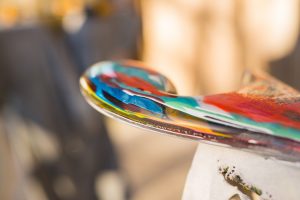 A close look at the sculptures reveals layers of accumulated resin.

“I have some visions about where this is all going,” Mike says contemplatively as he points out various features of the six-foot-long fish sculpture that hangs just inside his front doorway – including streaks of vibrant orange approximately midway through the piece. That layer in particular resonates with him because it’s part of one of his own personal boards.

“Every layer of that thing is a story,” Mike explains. “I’ve thought that in the future I could create a book for each recycled piece that tells you a little about all the boards that went into it. There are a lot of great guys out there riding my boards, and I’m never going to quit shaping. That’s how I got here.”

Of course, finding time to devote to his artwork can be a pretty significant hurdle (in addition to board building, Mike also manages several local Airbnbs, waits tables a couple of nights a week at The Blue Point in Duck and picks up plenty of construction gigs during the wintertime). All of that aside, Mike has made it an increasing priority to focus as much as possible on his newest venture as it takes shape in ways even he can still be surprised by.

“This might be the most meaningful thing I’ve ever done, and I’m pretty positive this stuff’s going to keep evolving,” Mike says with a good-natured laugh. “So if you think it’s cool now, just wait another year.”