The Birds And The Bees: A Family Affair 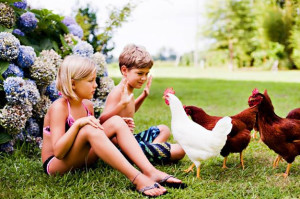 Outer Bankers are doing their part to perpetuate more than one species—and you can too!

When my daughter and I had the chance to visit with three local backyard chicken raisers, also known as backyard poultry breeders, what surprised me the most was the relationship between the owners and chickens: “I can’t wait to brag about my babies” and “I’m so excited to show off the girls!”

I met 165 chickens, and most of them had names. Many came when called by their owners, and they were surrounded by children and family pets. We saw the admiration for the creatures that provided for our hosts and the pride of successfully undertaking a venture to be more self-sustaining.

Tim and Jennifer Gard live with their son Henry on “the family compound” in Manns Harbor, property that has been in the Gard family since before the Civil War. Raising chickens is their latest adventure; they are both chefs at Ocean Boulevard Bistro, and have a passion for quality fresh and local food. Jennifer has worked as an assistant for local veterinarians, and her love for animals is apparent when she serves homemade frozen treats to her “girls”. Watching Henry, beaming with pride and wonder, climb in the coop to gather eggs, it is apparent that the Gards’ endeavor is a success in more than just one way.

Emily Midgette Pharr had chickens growing up, and now she is raising 25 hens and three roosters with her family at the Colington Campground, owned and operated by her parents. In the 1950s, her relative Ira Partridge was instrumental in changing the laws in Colington to allow livestock. Our children played hide and seek and ran around the yard with the chickens as Emily shared her experiences with me.

While many of her chickens are there to produce eggs, she jokes that others are “yard decorations”; she has an interesting variety of some very unique looking birds. “It’s fun and silly, raising kids to take care of something not domesticated….It might be messy but having something that can provide for our family is nice.” Some day soon when production is up she looks forward to bartering and being “a little further off the grid than we are now.”

Shawn Davenport, of Powell’s Point, now has 130 chickens, two turkeys and some ducks. Her father inspired her love of animals as a girl, and a few years after her son was born, she wanted him to “experience hatching; to teach him responsibility.” They got 20 chickens for eggs, and The Chicken Lady (as she calls herself) was off and running.

The community’s response to her endeavor has been overwhelmingly positive. Her drive to educate and share her experiences to help others has led her to create the Facebook page Farm Life. She also gives talks in local classrooms and started a 4H chicken club for kids called Fancy Feathers.

Like the others I spoke with, the hardest part for Shawn is losing one of her “girls” to a predator when she “wasn’t there to protect them.” The best part, besides watching their unique personalities unfold, is observing their interactions with children. “When they first get to hold the chicken or find that egg and are in awe of what chickens can do, it’s indescribable,” she says. While she has become a supplier of both eggs and chickens in the community, she doesn’t make a profit. “It just supports my hobby,” Shawn says with a smile. 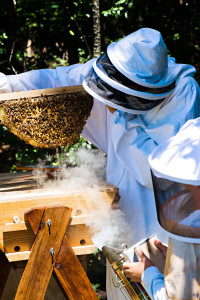 I had the unique pleasure of bringing my third grade son along to visit three beekeepers (otherwise known as apiaries or apiasts) on the Outer Banks that are doing their part to keep honeybees alive and well.

We first visited Candace Owens and her two children at their home in Grandy where they’ve raised both bees and chickens. The chicken coop isn’t active at the moment; sadly, a predator—likely a fox or coyote—got into the coop. They will refortify their coop and try again. Their beehive, however, thrives.

Candace explained that for her, raising bees felt like a natural progression from raising chickens. “They’re more work than raising a cat, but less than a dog,” says Candace.

She read every book in the library and researched online for a year before taking the plunge. She ordered her “starter kits” of bees from Winston-Salem, trying to keep it as local as possible, receiving two boxes; one holding the queen and two to three “attendants”, the other with a thousand bees. They showed us their protective beekeeping suits, and also the smoker they use to calm the hive when going in to do a “check-up” once every two weeks, making sure they are healthy and producing well.

The Owens family uses every conceivable byproduct of their honeybees, including the wax, honey, bee pollen and honey comb (it whitens teeth!). They have an arrangement with the farmers next door to protect their bees from pesticides; their neighbors let them know before they spray their crops so they can lock up their bees.

For Candace, the hardest part of this undertaking (besides “nerves in the beginning”) is worrying about keeping them happy and thriving.  The best part? The kids say “honey!” right away, but she says it’s rewarding putting in work and seeing what you get back from it. Her thriving blueberry bushes are a testament to what their bees are contributing to plant life on their own property.

O.D. Bee is the Owens’ Facebook page that documents their learning venture with bees and shares their knowledge with others. In case you’re not picking up on the play on words, “ODB “ is a member of the infamous Wu-Tang Clan band; other prominent members include RZA and JZA, which are the names of the two beehives on their property. O.D. Bee is informative and entertaining!

Next, I visited with Fountain Odom on his back porch in Manteo, where we talked about life and bees as he smoked his corn cob pipe. Fountain, a former senator, has had a passion for beekeeping since he began in the early 1970s. “Once I got started, I was intoxicated,” says Fountain. “Bees are at the top of the list of the most interesting things our Creator provided this spinning globe, for all they have done for mankind.” His daughter in Chapel Hill has kept bees, and his brother in Charlotte looks after his 18 hives of bees these days—but Fountain still likes harvesting the honey himself.

Fountain is a board member of the NC State Beekeeper’s Association. He got involved locally when he learned of a proposed ordinance to ban beekeeping in Manteo (originating when a neighbor allergic to bees filed a complaint), and helped Denise Deacon start the Outer Banks Beekeepers Guild. He talks passionately about the Outer Banks being akin to a California wine valley in its ability to produce unique and quality honey, without the presence of mega-farms and neonicotinoids. “We have the potential to have the best honey in the world,” says Fountain.

Fountain is a member of the American Apitherapy Society, proponents of the use of beehive products such as honey, bee pollen, propolis and bee venom as alternative healthcare in treating acute and chronic pain. Fountain, a cancer survivor, had severe arthritis in his knee, and can personally testify to the curative power of bees. He and his wife Carmen own The Mothervine Nutraceutical Company, which manufactures and sells original products made from byproducts of local muscadine grapes and bees. His favorite part of keeping bees is the self-satisfaction of a hobby and business that is so natural and organic.

Denise Deacon, President and co-founder the Outer Banks Beekeepers Guild, has been keeping bees with her husband John since the spring of 2012. They currently maintain three hives at their home in Kitty Hawk, which in their peak season hold about 80,000 per hive. Denise started with a beekeeping course at the Agricultural Center in Currituck, and was having a hard time finding other beekeepers. In her first year, she lost both of her hives to the parasitic Varroa mite. “It just breaks your heart,” says Denise. Determined to learn more and share knowledge, she began networking. When she met up with Fountain, (“a group effort”, they both say), the Outer Banks Beekeeper’s Guild was born, now with 26 paid members.

Recently, an unlikely ally for local beekeepers attended their monthly meeting—Carl Walker, head of Dare County Mosquito Control. Mosquito Control agreed to not spray in areas they know contain beehives and beekeepers could post reflective signs alerting the truck drivers. Walker does have a secret motive; he wants to be a beekeeper when he retires.

Denise’s favorite part of keeping bees is watching them work. “It’s mesmerizing,” she says. “I start to feel lazy, like they’re the ones doing all of the work!” She is proud of the fact that there are no chemicals in or near the hive, and like the Owens family she uses every byproduct of the hive to create natural products from lip balm to candles to deodorant. O.B. Hive is her label, and the website is in development.

“If the bee disappeared off the face of the earth, man would only have four years left to live.”

This popular quote is commonly attributed to Albert Einstein, but it’s somewhat of an urban legend. It started popping up about 40 years after Einstein’s death in a speech given at a political protest held by European beekeepers. Currently, the most imminent threat is to one third of the world’s crops that require pollination like berries, watermelons and cucumbers for starters.

Mother Nature intended to give hens the winter months off from giving birth nearly every single day of their first few years of life (yikes!). For those interested in harvesting eggs year round, artificial lights are employed mimicking the cycle of the sun during more productive months.

Highly evolved socially, honeybees have their own version of GPS, and they communicate vital info to one another by means of a little show they put on called The Waggle Dance. Upon their return to the hive, they angle themselves at a degree that tells the other worker bees the exact location of the flower source they have come from.

Known as apitherapy or bee sting therapy, honey, bee pollen and propolis have been used for their antiseptic properties to heal wounds for centuries. Apitherapists have been successful in alleviating chronic and acute pain from the likes of arthritis and fibromyalgia.

Chicken hens typically lay eggs from the ages of six months to three years at an average rate of one egg laid per day. After that, these “old girls” are considered past their prime!