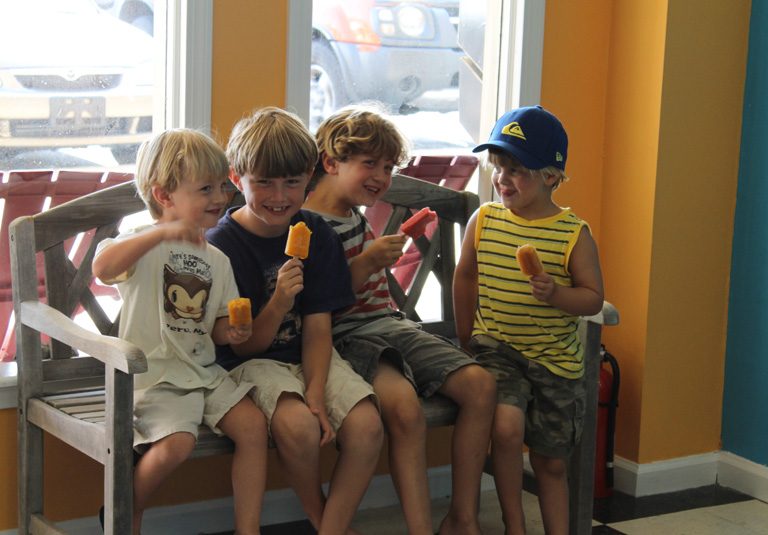 Owner Crystal Swain had actually been selling her pops since last May in farmers markets in Manteo and Hatteras she says.

She found paletas inspiring. “They’re really fruit-driven; they don’t have artificial sweeteners or artificial ingredients in them,” Swain says. Also, they come in unusual flavors, sometimes including peppers or cucumbers. “We kind of carry that theme in our pops,” she adds.

According to Swain, her Zen Pops are organic and handmade daily, so they’re always fresh. But the main focus is local. “We really want to make sure we’re showcasing local fruits and herbs,” Swain says.

When customers finish their pops, they can put the sticks in a bucket to vote for their favorite local charity. Every quarter, Zen Pops donates money to the charities according to how people voted. The three summer charities are Food for Thought, Dare County Arts Council and the SPCA.

Zen Pops cleans the sticks and donates them to Children @ Play Museum and local schools for craft projects. 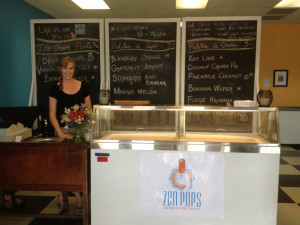 The flavors change every week, except for staple favorites that include key lime pie, Mexican chocolate and fudge brownie.

“The fruit ones change a lot,” she says. “In a couple more weeks, we’ll be getting watermelon in. Everyone loves watermelon. I try to buy in bulk to stretch out the short season of fruits.”

Swain’s first exposure to paletas was while living in Durham, she says. Her 7-year-old son—then four—introduced her to Locopops.

“I loved the simplicity of the product,” she says. “It focused on the ingredients . . . I knew I could take that concept and turn it into something even more holistic.”

Her son can’t eat dairy, which she says was another reason she wanted to make the pops.

Manuel Flores, a pop-maker from Austin, Texas, encouraged Swain in her endeavor. She moved to the Outer Banks to be close to family, and opening a storefront here was “the natural progression of things,” she explains.

Swain also makes 100 percent organic ice cream, including one all-vegan flavor, which is sold by the pint.

Flavors evolve with each taste. Begins with a subtle but clear pineapple flavor. The coconut milk begins to assert itself as the pop diminishes until by the end there is a merging of tropical flavors.

“Wow! It tastes just like key lime pie!” our taster exclaimed. And it does.

Very peachy at first with the ginger flavors coming to the fore as the pop is consumed.

An all-vegan ice cream, made with coconut milk. Deep, powerful, dark chocolate flavor. Very rich and satisfying. Has garnered enthusiasm from all chocolate lovers—vegan or not.

The local mint balances beautifully with the vanilla flavors and chocolate chips. The editor’s tasters selected this as their take-home treat.