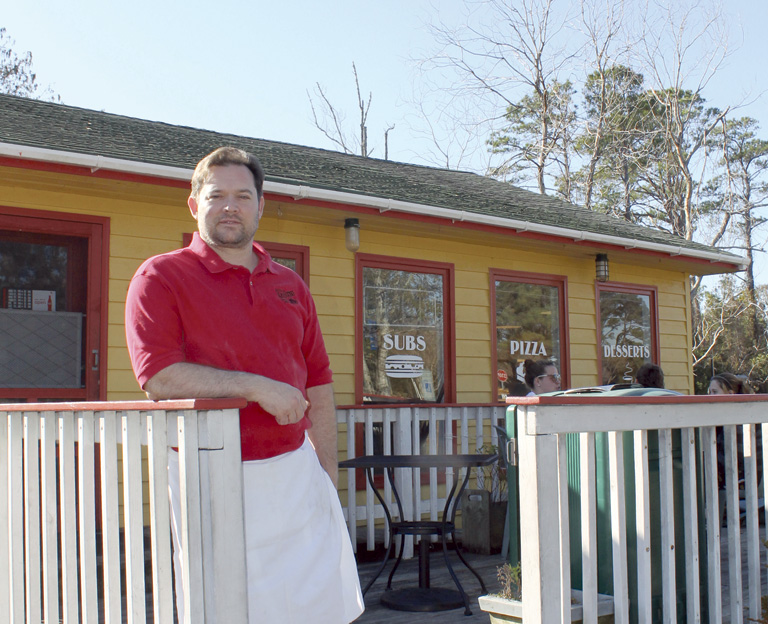 Manteo Mayor Jamie Daniels began his political career 12 years ago when he started serving on the town planning board. “I was nosy,” he says.

He explains that people came into Garden Deli and Pizzeria, which he and his wife Nadine have owned for 17 years, talking about local goings-on. As part of the planning board, he got to know the news as it was happening.

“What really surprised me the most I think, as mayor…was how much I had to do at the state level,” Daniels says. He anticipated being in charge of the town, but also often found himself serving as the town’s voice to the state.

Now in the middle of his third term, Daniels has served five years as mayor.

He met his wife while enrolled in Baltimore International Culinary College, and the couple worked together at a restaurant in Corolla. “We worked nonstop all summer for somebody else, [and we] thought, ‘we could do this ourselves,’” Daniels says.

Purchasing Garden Deli was quick. The couple closed on the restaurant in about a week. “It was meant to be,” he notes.

A year later, they were married. Daniels says he guesses he considered marriage a bigger commitment than opening a restaurant together. They have a son, 12, and a daughter, 7, and celebrated their 16th wedding anniversary in October 2012.

A native of Manteo and Manns Harbor, Daniels says being mayor involves a lot of reinventing the wheel. His grandfather, Luther Daniels, who passed away in May, served two terms as mayor in the 1980s, and many of the same issues continue to resurface now.

Still, Daniels thinks the town is on the right track. “When you get a machine running well, you keep it oiled, keep it gassed, [give it] constant attention and tinkering to keep things moving,” he says.

The budget is a big part of being mayor, and there, his business management experience is helpful. There is never enough money to fund everything and budgeting decisions are important. “You need to be a good steward of it: people’s tax dollars.”

The town’s staff is 33 people, and Daniels considered it a weighty decision to hire one new person, which doubled the waterfront staff. The town now runs the Maritime Museum, he explains, which used to be a partnership between the town and Festival Park.

He spends an average of 15 hours a week on mayor-related work; but that can be two hours one week and 28 the next. Sometimes four-to-five hour meetings require advance research, he says.

Town Manager Kermit Skinner has been “really flexible,” Daniels says. “He’ll come up here to talk to me, while I’m in the store room putting an order away.”

Although he often spends 60 to 70 hours a week at the restaurant, he manages to remain connected.

“I’ll think of something while I’m slicing [pizza], write an email and go back to slicing,” he explains.

According to Daniels, some of his most important achievements as mayor are water-related.

“Getting money earmarked for stormwater, that was big,” he says. He plans to put new stormwater lines downtown and retrofit the old system to treat water as it passes through, minimizing pollution by runoff.

“We’ve been three to three-and-a-half years violation-free, except during hurricanes when half the town’s underwater,” Daniels states.

He jumps up to answer a question from a customer asking what a cannoli is, rings up a few people at the register and sits again.

Daniels is an efficient multi-tasker who plows into both his jobs with gusto, taking on additional responsibilities where he feels it will benefit his town.

He sits on the Dare County Tourism Board, and his knowledge of the character of Manteo has been important in marketing the downtown. Acknowledging the lack of lodging in town, the board has moved to promote daytrips to Roanoke Island.

“You save that character that is Manteo so that you can show it off to people,” he says. “It was a tiny port town, [but] everything used to come through Manteo. It’s amazing when you think about it.”

“We know who we are and we’re going to stay that,” Daniels says, referencing Manteo’s history. “We still have crab shedders downtown, and I hope we always do.”