Out on the Water – The Highs and Lows of Charter Fishing 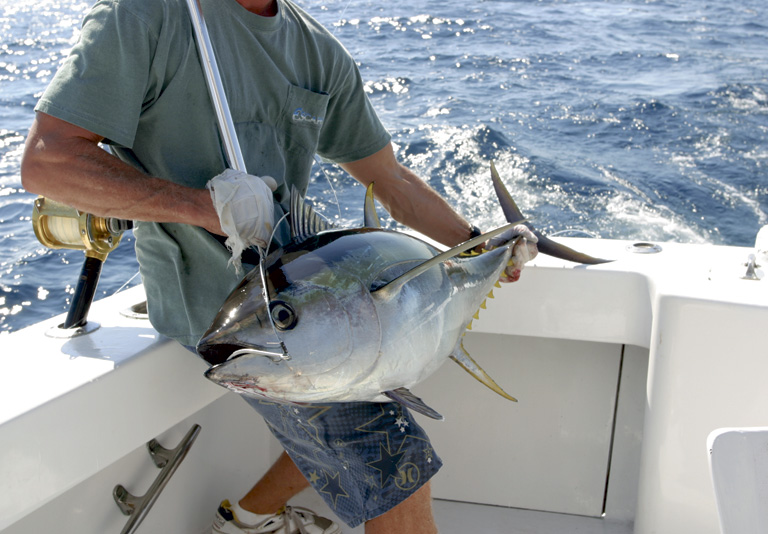 The excitement of a day on the water, full of unknowns, is one of the best things about the job, charter captains say. Some days you see whales, sea turtles, sharks and other sea life, says Ben Hoffmier, captain of Driftwood Charters. Watching the sunrise and days with pretty weather are perks that Olan West, captain of West Wind Charters, loves best.

The concept is simple. You pay a fee in exchange for a knowledgeable crew, boat and equipment. All you have to do is fish—a blanket license covers everyone onboard so no individual fishing licenses are required—and the crew will even teach you how to fish. Charter fishing options include offshore, inshore and inlet.

For offshore fisherman, the Outer Banks is the Billfish Capital of the world: hundreds of blue marlin, white marlin and sailfish are caught and released here each year, according to www.outerbanks.org.

Most of the billfish get thrown back. They’re not considered good eating,  just a prestigious catch, West explains, so it makes sense to release them. “Some people just love to marlin fish; some people love to catch meat fish.”

In addition to billfish, Outer Banks waters are known for abundant dolphin, tuna, and wahoo in the summer and stripers and bluefin tuna in the winter. But while fishing is good in the summer, Hoffmier says it’s actually best in the fall and winter, when schools of large fish migrate.

“There are not many places you catch such a variety of fish,” West adds. “There’s almost always something to catch; charters make it pretty easy to go fishing.”

Fish congregate near the Gulf Stream, West explains. It’s a 1.5- to 2-hour ride to make the trip out—about 40 miles.

Claiming it is the largest and most modern fishing fleet on the Eastern Seaboard, the Oregon Inlet Fishing Center website lists 41 boats available for chartering, “It is world class fishing on the Outer Banks,” confirms West.

Charles Finch “Fin” Gaddy, captain of Qualifier Charters and Raleigh native, is now living his dream. “As a kid I always wanted to fish out of the Oregon Inlet Fishing Center—the best of the best; there’s only one world-famous fishing center,” he says. He remembers everyone in the fishing community knew the captains here by name, and many people began as mates and learned the trade from Outer Banks captains.

Captains agree that the impetus for getting into and staying in the business is not for profit alone.

“You have to love fishing,” West says. “There’s not a lot of money in it.”

Replacing parts, changing the oil, keeping the boat fueled, and then hauling it out of the water to clean, sand and repaint the bottom every year adds up, West says. Plus the tackle must be regularly replaced.

“It is tougher and less lucrative than it appears,” Hoffmier affirms. “A group recently told me BOAT stands for ‘Break Out Another Thousand.’ I got a kick out of that one.”

The going rate for a day of offshore charter fishing is $1,500 or more. That is expensive, Gaddy acknowledges, but “look at what we burn a day in fuel, insurance…like everything, the cost of operation has gone up incredibly.”

Success on the Water

“A lot of people try to define success based on the poundage of fish you catch,” Gaddy muses. “In today’s world, that thought needs to change.”

“When we’re not catching them, it sucks for us, too,” says Gaddy. “We’re harder on ourselves than we ought to be.”

He explains that he wants them to have a good time and catch plenty of fish, but also enjoy the whole experience.

Gaddy considers the camaraderie and the memories made among the most important elements. Being captive on a boat can translate into quality family bonding time.

He adds, “There are a lot of things in today’s world that separate families,” and the pictures capturing those memories on the boat are the type of souvenirs to cherish.

Difficulties inherent in chartering include hard physical labor, the inability to predict weather for clients weeks in advance, the pressure to catch fish—which comes into play when the fish aren’t cooperating—and drunks.

Gaddy has seen people drinking liquor on the rocks at 6 a.m., failing to think about the long day ahead on the water, he notes; and some people will get seasick even with no alcohol.

He advises not to overindulge the night before, either: “Having a hangover certainly wouldn’t be a plus.”

He says a surprising number of people forget their cameras, raingear, sunglasses and medications for diabetes, allergies and more. Even having a mild allergic reaction to food can become an event when you’re miles out at sea. “Getting in a car’s not an option. A lot of people don’t think about that.”

Some charters stay closer to home. Chad Hemilright, captain of Havin’ Fun Soundside Charters, which runs out of Dock of the Bay Marina in Kitty Hawk, says he has a niche separate from ocean charters.

From June to November, he charters in the sound because, as a Kitty Hawk native, he knows the waters well, and is targeting families and kids.

His half-day trips are roughly three hours fishing and the last hour or so pulling in crab pots. Whether the fish bite or not, as a commercial crabber in the off season, he has enough pots to ensure his clients always come home with something.

Hoffmier doesn’t usually go off shore either. He notes that the summer season is by far the busiest, thanks to the visitors, and he runs light tackle and fly fishing trips in the backwaters of the sound and inlet, and only occasionally charters in the ocean.

“Working on the water, you’ve got to be diversified, with the price of fuel and all,” Hemilright says. “If you’re fair to people and show them a good time, eight times out of ten they’re going to come back.”