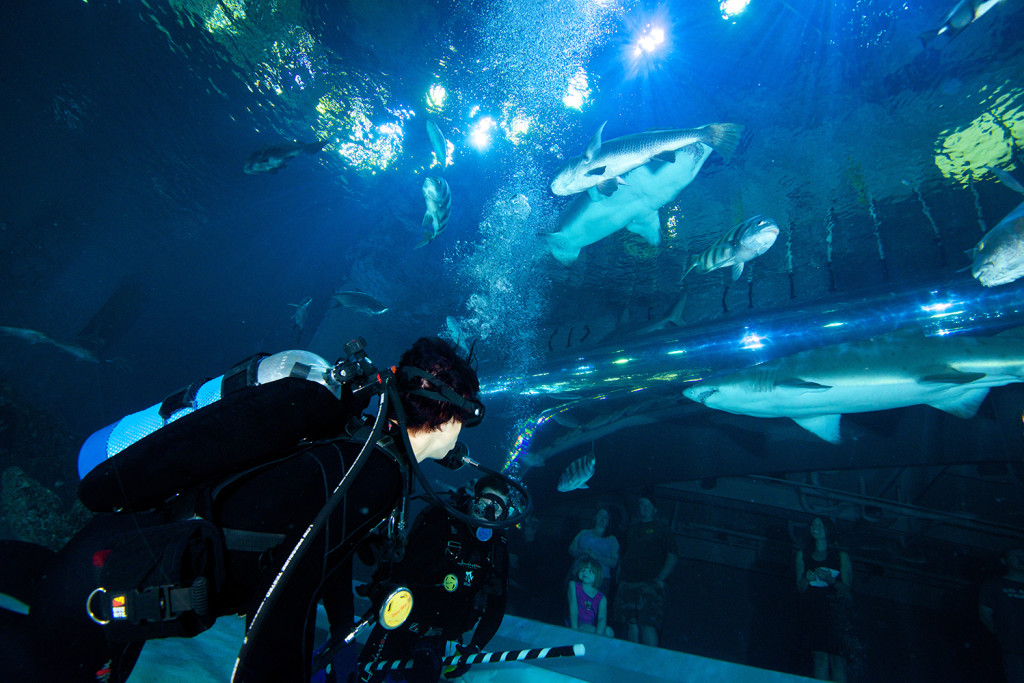 There are two types of people in this world: those who think it’s insane to dive with sharks and those who don’t.

Leslie Young, sales administrator at Brindley Beach Vacations & Sales, bartender at Coastal Cravings and avid Outer Banks Bootcamper, is a certified diver. She’s also a pretty fearless go-getter of a woman who happens to be training for a half Ironman. I knew—just knew—she’d say yes to jumping into the shark tank at the North Carolina Aquarium on Roanoke Island. And she did. Her response, in typical Leslie form, was, “I’d love to!”

The Graveyard of the Atlantic (GYA) exhibit has been a part of the Aquarium’s guest dive program since Memorial Day weekend 2012. Since then there have been 368 guest dives in the 285,000-gallon tank. Currently 11 sharks share the tank: seven sandbar sharks, three sand tiger sharks and one nurse shark.

On the morning of the dive, Leslie admitted feeling “excited and a little nervous”, but mostly, she said, because it had been quite some time since her last dive. One of her last dives hadn’t gone according to plan; she had breathed in gas fumes from the boat and wound up nearly shooting to the surface from an 80′ depth. Her dive partner grabbed her foot and kept her calm until they could safely reach the top.

Once we arrived, we were ushered into the behind-the-scenes maze of offices at the aquarium where we met with Guest Dive Coordinator Jason Sheremeta, Dive Safety Officer Patrick “Murph” Murphy, and underwater photographer and Director of Education and Outreach and Field Operations Coordinator at CSI John McCord.

As a writer who falls squarely into the “it’s insane to dive with sharks” category, it was fascinating to hear Jason, Murph and John discuss how “relaxing” it can be underwater, and how diving with sharks is actually safer than say, driving on the bypass to the aquarium.

Murph gave me the stats: the aquarium has overseen 49,822 “individual splashes” or dives since May 2000. That comes out to 43,675 hours in the tank, or roughly five years underwater. YEARS. Out of all of those dives, only 53 have been aborted due to equipment malfunction, unusual animal behavior or other factors. And the best statistic of all: not a single incident occurred between the sharks and the divers in all that time.

Leslie seemed convinced. Convinced enough to go upstairs (also called “topside” where the divers suit up and enter the tank) and sign four pages front and back of release forms. Jason, in the most calm and nonchalant manner conceivable, almost convinced ME to get in the water.

Jason discussed the individual sharks at length, and we learned about the amorous 8’ male nurse shark who has tried unsuccessfully to mate with the female tiger sharks in the tank. He told Leslie in a half serious voice that she should expect to be attacked when she entered the tank—not by a shark, of course—but by the 4 inch Sergeant Major fish who actively guards her eggs.

As for protocol in the water below, Jason told Leslie she should stick with him along the sides of the tank or at the bottom as a general safety rule. He asked her not to touch any of the sharks or fish, and that sharks have the “right of way” in the exhibit. He also went through a variety of hand signals such as “Ok” (not to be confused with the thumbs up, which is a signal that means “end the dive” or “Not Ok”), “Not Ok”, and “Ears” (used to communicate an ear equalization problem).

He explained that he carries a safety pole, which is actually a PVC pipe striped with black electrical tape. “It’s a visual barrier,” explained Jason. Sharks can see the contrasting colors, and the pole helps them to not “bump into” the divers.

Jason, Leslie and John suited up—3 mil suits all around for the 78 degree water—and entered the acclimation tank. At about 3 feet in depth, the tank is the entryway to the exhibit. Divers start here, get their tanks and masks on, and check their weight belts before slipping through the window-like hole into the GYA.

I watched from the top as the three divers swam through the entryway and made their way to the bottom of the tank sticking close to the side. Visibility from the top of the tank is somewhat limited, so I went back downstairs to the front of the exhibit (where regular aquarium guests view the sharks) to watch them.

It didn’t take long to realize that Leslie was at ease in the strange environment. She knelt down at the bottom of the tank and watched the sharks swim over and around her. My stomach was in my throat, but I could tell that she was relaxed.

The dive was over in no time, and I rushed back to the top to see Leslie and gauge her reaction. “That was awesome!” she laughed. “At first I was breathing heavy…getting used to the regulator…but once I got centered, my breathing got better.”

The sharks, it turned out, really weren’t so scary after all.

“When you’re sitting on the bottom you actually want to reach out and touch them, but you can’t. You just realize that they’re not horrible.”

Having both John and Jason underwater during the dive was a huge help. “Jason was a very good guide,” said Leslie. “He was always checking on me, and he made me feel very safe.”

As for shark diving in the GYA, Leslie would recommend it to other divers.

Want to go? Here are the details: