Hubby Bliven: Behind the Glass 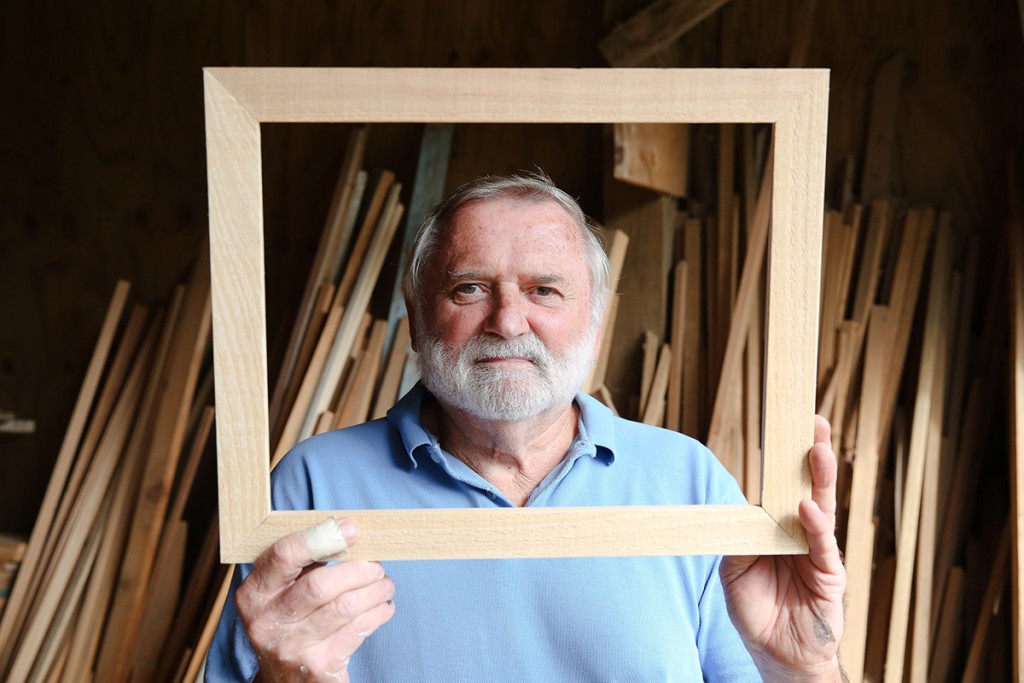 Carrying four rolled-up prints that I need framed, I tread lightly across the yard and knock on the front door. The big beautiful white house stands before me but no one answers . After a few moments, I walk around the side of the house and look out back for the shop. I’m wading through tall grass and peeking into windows when a man appears around the corner and asks, “Can I help you?”

Startled, I jump at his voice, drop all my prints and stare at the man.

“Ummm…I would like these framed. I was told that you frame things,” I say as I reach to the ground and gather up my fallen prints. He looks at me quizzically and then laughs, “You must be looking for Hubby Bliven. He lives down the road around the bend.”

Yes, about that. I went down the road and around the bend. But no one could tell me exactly which road and which bend to turn on: “You can’t miss it.” “On the right before the tree.” “House out back.” These vague directions eventually led me to this mysterious stranger’s house who thankfully pointed me in the right direction instead of pointing something else at me for peeping in his windows. Classic Outer Banks. Classic Manteo, in fact. This is the story of how I met Herbert “Hubby” Bliven about 10 years ago.

I also imagine it is the way quite a few people have come upon his home and the Roanoke Heritage Art Gallery & Military Museum. I think this because since then I have given the same directions to friends who I have sent his way: “You turn left after the big brick church. It’s either there or the next left—I can’t remember—and you go down around the bend, and he’s on the right.” When you do arrive, you’ll see the gallery sign hanging out front along with a sign advertising buoys and driftwood for sale.

I must say that the journey to get there is much like Hubby himself: part folklore, part word of mouth, ever humble and unassuming. Yet once you peek into the museum and into the man himself, the quiet treasures that lie beneath tell stories for themselves. 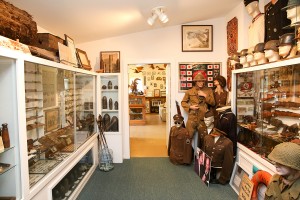 One of many rooms that make up the Roanoke Heritage Art Gallery & Military Museum.

Hubby insists his story has been told. He was reluctant to have another article written about him because everything had been covered: the artwork, the museum, the framing business. Yet just like the items he displays, every person has an untold story. With Hubby, his began around the time he was 16 when he and his brother used to ride bikes to the west side of Roanoke Island to find old arrowheads, bullets and bottles along the shore. The collection grew as he got older and his finds became more extraordinary. From bullet shells, pottery and old bottles to cannons, guns and coins—the collection spans the gamut.

Almost everything in the museum Hubby found himself. Using underwater metal detectors, special prods and sticks and a keen eye for the land, he continues to add pieces to the collection when he has time, depending on the tides, weather and his workload. I’m particularly drawn to the clay pipe collection and its intricacies as he points out forgotten details like an eagle claw gripping the bowl of the pipe. One particular pipe showcases a buck deer on one side and a cannon on the other, which he says represents Buchannan, Va., near where I grew up in Southwest Virginia.

You can tell he takes great pride in the building, its contents and his work . Moreover, you can see it as he describes how he wants these pieces displayed and shared with Outer Banks residents and visitors. And visit they do, often bringing gifts. When a loved one dies and leaves behind war memorabilia such as guns, knives and more, people don’t often know what to do or how to honor it. So they bring it to Hubby, who finds a place for it in his collection, which ensures that it has a place in history.

While the museum and its collection reside in Manteo, you can find pieces of Hubby himself all over the Outer Banks and beyond. In the back of the museum is his workshop where he paints mostly acrylic illustrations for his son Jeremy Bliven’s children’s novels Captain Stumpy the Pirate Cat. It also serves as his framing studio. When asked how he got into the framing business in the first place, he describes a one-man art show years ago. “I had 41 paintings to showcase and I couldn’t afford to frame them so I taught myself. During that art show, I sold two paintings and $600 worth of frames.”

It seems it just continued from there. Now he has families who come down for vacation and drop off 40 to 50 pieces of artwork to be framed that he has ready for them at the end of the week. In between framing, Hubby also greets the guests who come to tour the museum.

“I’m blessed to do something I love,” he says. Those blessings show up all around the Outer Banks in the form of his art and framing work, but be sure to turn left by the church, go around the bend and stop in. You never know what stories Hubby Bliven has left to tell.