Getting The Shot: An Interview With Outer Banks Lens Man Matt Lusk 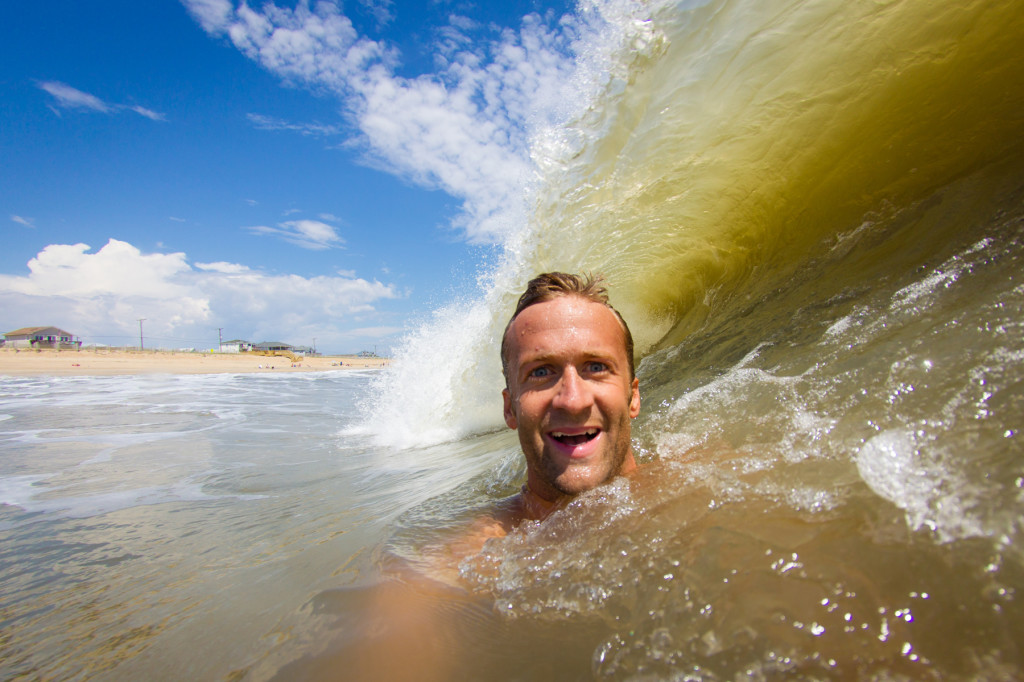 Surf photography allows surfers and non-surfers alike to enjoy the sport from afar. Recording action imagery is no small task, so I sat down with Outer Banks lens man Matt Lusk to find out just what it takes to get the shot.

Originally from Yorktown, Virginia, Lusk moved to the area in 2006 after college, utilizing a degree in chemistry and biology to work at the UNC Coastal Studies Institute. The job served its purpose, but he was still drawn to shooting photos after documenting a solo backpacking trip through Indonesia and Australia in between finishing school and joining the work force. He spent the next two years working and shooting photos on the side before finally taking the leap of faith in 2009 to become a full time photographer.

He readily admits that the money is in recording weddings, but his passion is documenting the action along the Dare County shorelines during any major swell event. Using Cannon gear exclusively, he can be seen roaming the beaches, looking for the perfect line up angle, or swimming in the actual surf with a waterproof housing trying to catch that “in the barrel with the surfer” point of view.

Matt says his favorite perspective of the job is “being in the impact zone with the surfer and having the wave pitching over both of you at the same time.” That angle is also one of the hardest to achieve. There are so many things that have to come together for that to happen in our local beach break conditions that it’s the reason he spends roughly 70% of his time shooting from the water. Matt says that viewing that type of image “makes you feel like you’re right there in the tube and part of the action.”

Matt says his go-to spot when it’s on is the Avalon Pier in Kill Devil Hills. This is due to the quality of the wave and the level of talent it attracts. He likes the versatility of having an elevated perspective shooting from the top of the pier, or he can move down the beach to use the pier as a backdrop. When the surf gets a little larger, he ventures south to hunt down the best sandbars and surfers from Pea Island to Frisco.

As far as conditions go, Matt likes an overhead day with off-shore winds and clear water, but will swim out in what he calls “chocolate milk” (stirred up sediment from the ocean floor) if the surf and surfers warrant it.

“The truth is that clean hollow surf is when you get the best images with the most marketability,” says Matt.

Matt tries to be apolitical when it comes to which surfers he works with on any given swell. Usually he will find surfers who excel in that day’s conditions. Matt says he really doesn’t chase down or work specifically with anyone, but takes more of a pied piper approach. Follow him, and you’ll get some images if you’re ripping!

At the day’s end, Matt doesn’t like to do too much editing once the gems have been plucked from the day’s captures.

“I might spend five to 10 minutes per photo (to enhance the image), but the majority of time is spent finding the useable ones,” he says. “I can shoot 500 frames in a session and have a return of about five keeper photos.”

His motivation is still the same as it was in the beginning: to capture the experience of the ocean lifestyle and share the beauty of what actually goes on at the water’s edge when all the right conditions come together. The satisfaction comes from that one shot out of thousands that might inspire someone to get out to the beach a little more often or remind them of just how beautiful this area is and how lucky we are to be able to enjoy it as our backyard.