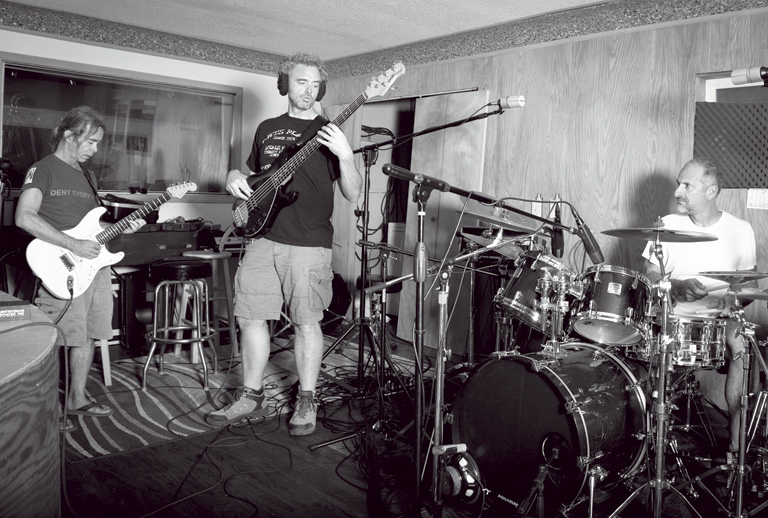 Tim Reynolds is a genius on the guitar. His sound is crisp, clean—lyrical and almost sad at times—balanced against a hard driving, power rock sound.

What may be most remarkable though is the way he constructs sound . . . the way every note he plays has meaning. No matter how complex a chord pattern, no matter how far from the original theme his lead may wander, it all has a purpose, and everything is resolved in the end.

It takes an extraordinary talent to play with someone who is so fiercely creative—and that perhaps is the genius of TR3.

Talking with the group, Tim Reynolds, Mick Taylor (bass) and Dan Martier (drums), can be disconcerting because the level of understanding about what they want to do with music can make it difficult to know who is speaking at any one time.

They had just come off a tour when we sat down. “It was great,” was Tim’s description, a thought echoed by the other two.

The group is not booked to tour again until mid July. As we go to press, Tim is scheduled to go on tour with the Dave Matthews band in mid May, an experience he describes as “crazy-good-surreal.”

The conversation, though, centers around the work they are doing for their third CD. They have just started working on it, and the concepts are still developing—an idea that they come back to a number of times.

“We’re planning to get more texture into this. Get more overdubs. Take it in different directions.” Tim adds, “It’s psychologically at the beginning of the process.”

Unlike their first CD, *Radiance*, that was recorded in one week in Charlottesville, the recording work they are doing now is being handled locally, and that is important. “Having a local studio gives us some breathing room to have some time to explore what we want to do,” Dan points out. “It gives us a chance to go back to our roots, but do it with new variations. New interpretations.”

It is some of those interpretations that make the group’s music fascinating. “There are a lot of themes in those songs,” Mick says. “They have these little plots and twists.”

The idea of the CD as the group talks seems to become a reflection of what they want to accomplish as musicians. “I like to use the studio as an instrument,” Tim says. “I always have a desire to expand what I can do with music.”

And then he reduces everything to its simplest: “I want it to sound awesome.”