“The Adventures of Cassidy Joyce: Five Summers of Lemonade” 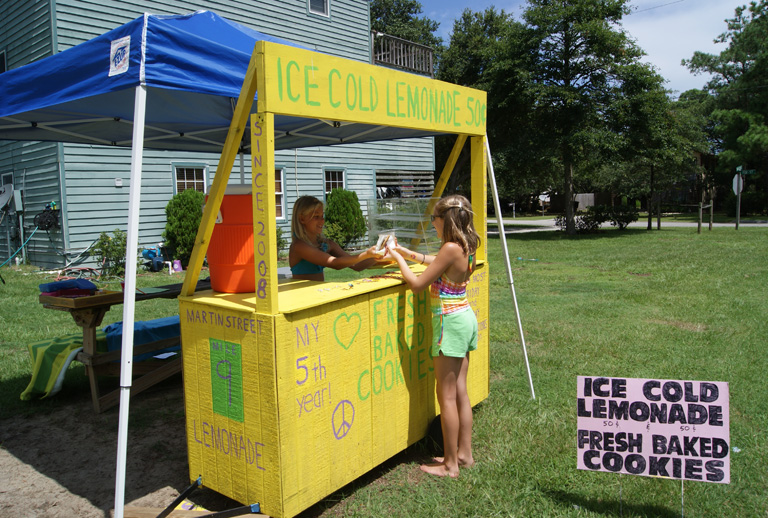 Cassidy Joyce with a customer at her lemonade stand on Martin St. in KDH.

Following the “Lemonade 50¢” signs near Martin Street in Kill Devil Hills, leads to far more than a simple lemonade stand.  What began as an amusing financial venture for Cassidy Joyce five summers ago has evolved into a successful entrepreneurship.

Well on her way to obtaining her dream-career as a fashion designer (“or actress or singer”), Cassidy also manufactures bracelets and earrings to sell while she waits for lemonade customers.

Cassidy started her business in 2008 because she “wanted a lot of stuff,” and her family wanted her to be more independent.  “It’s good for kids to have a lemonade stand or something; that way, they don’t stress their parents,” Cassidy explained as she filled a cup. Today, Cassidy donates a portion of her profits to March of Dimes, Jump Rope for Heart, and because of her love for animals, Feline Hope. She is excited about saving for a bunny and a hamster.

Although this eleven-year-old’s independence certainly shines through, she also enjoys the assistance of a few special people, including her parents Kevin and Teresa Joyce; Cassidy’s dad is her architect (he built her stand this year) and her mother, her accountant. Cassidy’s best friend Morgan, 10, also assists Cassidy with sales and jewelry-making. Another important member of this team is Cassidy’s security guard, Sam, her yellow Labrador.

Like other Outer Banks venues, Cassidy’s clientele consists of many, many visitors and several loyal locals. Customers have referred to Cassidy’s treats as “the best lemonade and cookies they’ve ever had.” Cassidy enjoys her small business because she gets to meet new people and “everyone is always really nice.”

Also true to Outer Banks culture, Cassidy’s business will soon close for the season and she will put away her concession stand and water cooler. During the fall and winter, Cassidy will make an occasional appearance to sell hot chocolate and hot apple cider. Cassidy’s Lemonade is a genuine and valuable component of Outer Banks culture that neither locals nor visitors will want to let pass them by.