Surfboard donated by Shane Collins for the silent auction. Artwork by Shane.

Held Saturday evening at Trio in Kitty Hawk, the Surfing for Autism fundraiser was a tremendous success.

The quality of a community is found in the way it reaches out to those in need. It is a tribute to the Outer Banks community that when a helping hand is offered it is done out of respect and compassion—not out of pity or the belief that somehow there will be repayment for a good deed.

Surfing for Autism came in to existence because folks in the Outer Banks community cared about children and their neighbors. Local surfer, Mark Slagle, who is also a musician, had been playing his guitar in the classroom where his wife, Cyndi, was working with special needs children.

The reaction to his music was so strong that Mark knew he needed to find additional ways to reach out to the children. At the same time, Eileen Lowry was searching for something unique and special for families and children diagnosed with Autism Spectrum Disorder, which is the broad description of all autism diagnoses.

In April of 2010 Mark and Eileen met in a coffee shop and from that meeting Surfing for Autism was born.

The first event was held in August of 2010 with 30 children and their families participating. Last year’s event doubled that participation with 60 kids getting a chance to go surfing with a pro. 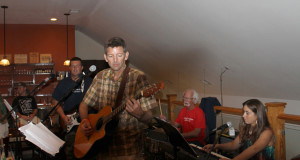 The 2012 surfing event will be held Saturday, August 11 at Jennette’s Pier, and it looks to be at least as large and maybe a bit bigger than last year’s event, according to Mark.

The fundraiser is an important part of the Surfing for Autism mission. The money that is raised insures that no family with a child diagnosed with autism will have to pay to ride a wave.

In spite of a driving rain and numerous thunderstorms, turn out for the event was very strong. “At last count we raised over $10,400,” Mark said. “That is amazing.”

“The one thing that is important for everyone to know is we couldn’t do it without the Outer Banks community,” he adds. “Kenny (Hyman) and John (Minnich) at Trio have just been fantastic.”