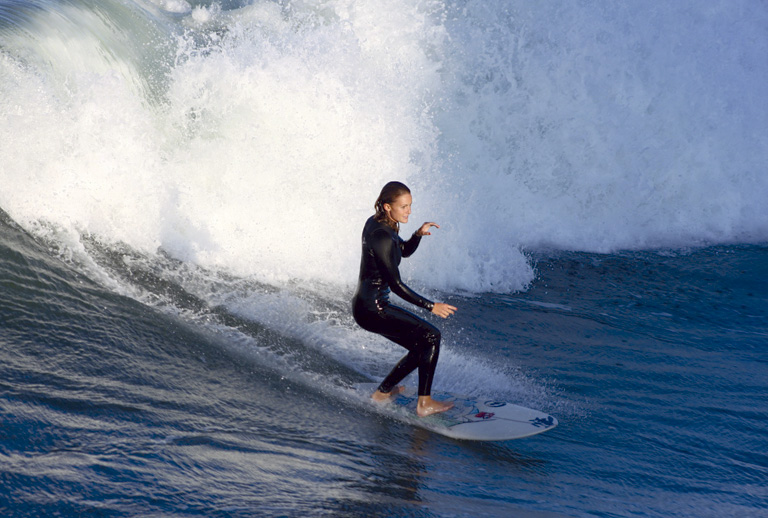 Women’s professional surfing has grown by leaps and bounds in the last few years, with a level of athleticism that has been closing the gap on the men, while still remaining uniquely feminine. In the world of sports, most individuals are driven by a variety of motivators: whether it’s raising the excepted bar or attaining personal goals, self promotion, or financial gain. In the scheme of raising boundaries, 24-year-old Outer Banks native, Kim Diggs, is not your average pro surfer.

After being ridiculed as a 12-year-old on her bodyboarding skills, Kim began surfing on a beat-up HIC surfboard given to her by her good friend Brent McCoy. It didn’t take her long to move from the Kitty Hawk shore break to Rodanthe’s hollow barrels to Oahu’s North Shore. A few years of competing with occasional success led to some notoriety and limited sponsorships, but it wasn’t until the international sports company, Patagonia, approached her to be a surfing ambassador that she realized the impact she could have on the sport. The eco-friendly company became aware of her through work she had done with the Love Light and Melody organization (lovelightandmelody.org).

While on a surf trip to Nicaragua, Kim ran into Brad Corrigan from the music group Dispatch. Brad is the founder of the charity Love Light and Melody, whose purpose is to use music and the arts to help raise awareness of the extreme poverty in Nicaragua and all over the world. He took her to visit the impoverished area of Managua known as La Chureca (the scavenging place).

Located in the smoldering city dump, this community of roughly 220 families lives in cardboard and tin huts, and survives by rummaging through what the rest of the city throws away. Kim stated that while the experience was probably the most traumatizing thing she’d ever endured, the good that came out of it outweighed the bad. Due mainly to the work of the charity, the country is in the process of relocating the families out of the dump and into better environments.

When asked about her interest outside of surfing she noted that family has always been important and that wanting to be close to her sisters is what kept her here in North Carolina over the summer months.

With older siblings Nicole and Brittany recently starting their own families, and younger sis Brianna just graduating high school, Kim thought the recent time off from travel would be well spent here on the Banks. Being home also gives her time to spend playing piano and working on art projects.

In the two years she has been representing Patagonia, her whirlwind travels have included a cross country drive to California, a trip to Europe, back to Nicaragua, and a stint in Japan. While staying on couches and living out of suitcases can test your endurance and sanity she said the experiences and people she’s met have absolutely outweighed the hassles involved. The next few months will include another trip to Ventura, California, then off to Hawaii for the Pacific season.

Kim’s ambassadorship with Patagonia has proven to be a good fit.

According to her, their philosophy is to give back to the areas that people visit to engage in the sports they promote. This coincides with the ideas her father instilled in her in their early travels. He taught her that if you visit somewhere and take some waves, some memories or even seashells, make sure to leave some good impressions with the people  you meet, along with some sandals and a few t-shirts.