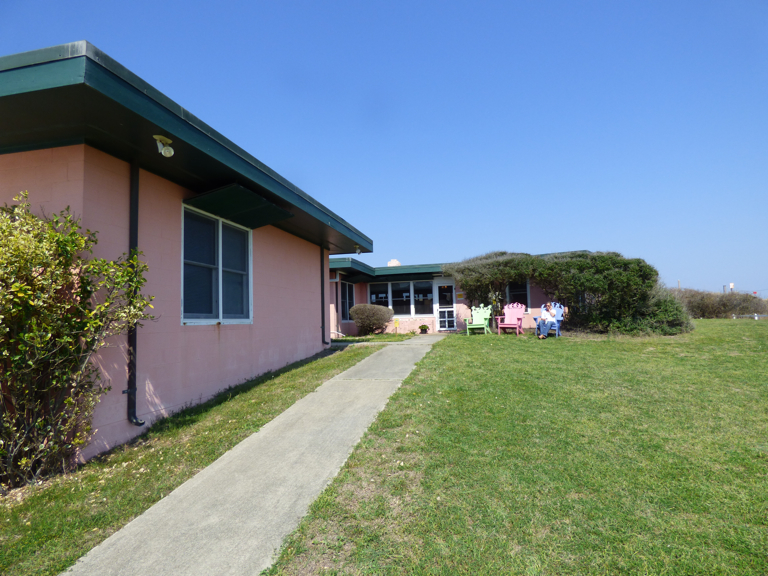 The Saturday tour of the Southern Shores Flat Tops could not have had more spectacular weather–not a cloud in the sky, a light breeze and temperatures in the 70s. But perfect weather cannot hide the trouble future for these symbols of Outer Banks life.

Starting with a lecture by Steve Gudas from notes prepared by author Marimar McNaughton, the history of the the Flat Tops was recounted to a standing room only audience at the Pitt Center in Southern Shores.

Although beautiful in their simplicity and supremely functional, they are inevitably succumbing to the realties of a modern economy. Of the almost 300 flat tops that were built at most 30 remain.

Originally designed from similar homes artist Frank Stick had seen in Florida, the architecture prized simplicity–two or three bedrooms and kitchen off a living area; single story, the living room tended to be both the entry and exit, leading out to a backyard often bordering the ocean.

To keep costs down builders used Outer Banks sand as mortar for the concrete–sea shells are commonly seen in the concrete blocks and foundations of the homes–and juniper was used for the framing and paneling of the houses.

The homes are remarkably well made. Juniper, which was plentiful in eastern North Carolina at the time, naturally resists rot and retains is fragrance long after it’s harvested. The original concrete blocks have withstood all that Mother Nature has thrown at them for the past 60 or 65 years.

There were 14 homes on this year’s tour, most of them hosted by the families that own them–many times generations of families were on hand to show off a treasured family heirloom.

There is a Southern Shores Flat Top Preservation fund. Donations can be made through the Outer Banks Community Foundation.