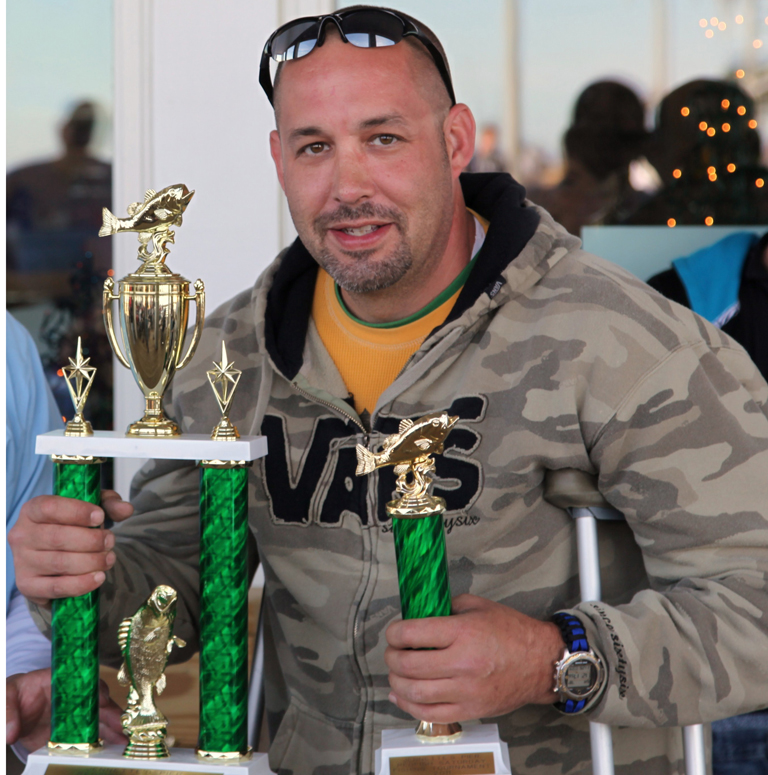 Bryan Major of Richmond, Va., holds two trophies from last year’s tournament. He caught the largest speckled trout, which turned out to be the largest fish in the tournament.

Looking for something to do after your Thanksgiving Thursday feast and Black Friday shopping?

Check out the Second Annual Redfish Saturday Tournament Nov. 24 at Jennette’s Pier in Nags Head. Anglers of all ages and skill levels can compete for prizes in up to 12 game fish categories.

The red drum bite has been off the hook so far this fall, and tournament participants can target them or any other species, including black drum, speckled trout, bluefish, sea mullet, striped bass and more.

The tournament will run from 7 a.m. to 1 p.m., with lines in the water 8 a.m. to noon. The longest fish in each category wins, followed immediately by an awards ceremony after the tournament.

To spice things up this year, hot chili from Kelly’s Outer Banks Restaurant and Tavern in Nags Head will be served at noon while judges tally results. House Autry will supply corn bread, and Pepsi will supply some of its favorite products. In addition, Sea Striker and Tar River Sports will supply giveaway items.

“This event is shaping up to the best tournament we’ve had since the pier reopened in May of 2011,” said Daryl Law, tournament director. “Fishing has been red hot so far this month, and we expect to see plenty of puppy drum and trout coming over the rail.”

Judges reserve the right to award anglers for unusual catches. In the past, exemplary awards have gone to anglers who caught exceptionally large skates or rays, Law said.

“We hope to see plenty of people make it out that Saturday morning,” he said. “Both families and individuals are encouraged to try their luck.”

Registration is $15 for adults and $8 for ages 13 and under. Register now at the pier, or online at jennettespier.net. On tournament day, registration will begin at 7 a.m. A rain date is set for Sunday, Nov. 25.

This tournament is supported by a grant from the Outer Banks Visitor’s Bureau.