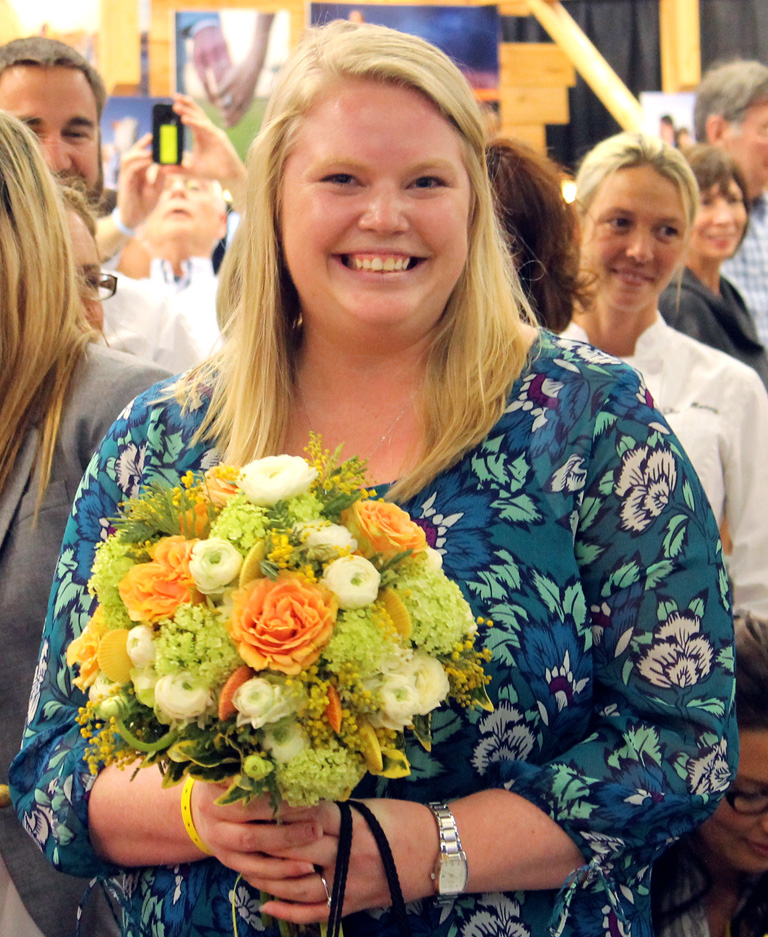 Here are some things to know if you missed this year’s Outer Banks Wedding Expo and are planning on coming next year: bring a good appetite, a notepad and comfortable shoes.

Of the three, a good appetite is the most important. As far as I can tell, every caterer from Coinjock to Hatteras was  here, and all of them want you to try their food. No, that’s not quite accurate . . . they’re more like culinary food pushers standing behind silver pans offering the first bite for free.

Be aware that any diet you may be on, any will power you man have, will wilt when faced with bite-sized morsels of orange ginger Oolong tea smoked duck on a wild rice and truffle salad (Inn at Pamlico Sound) or an ahi tuna taco (Chili Peppers). I mention these two because they really stood out for me, but after sampling everything—at least it feels like everything—I can honestly say there was no bad food. 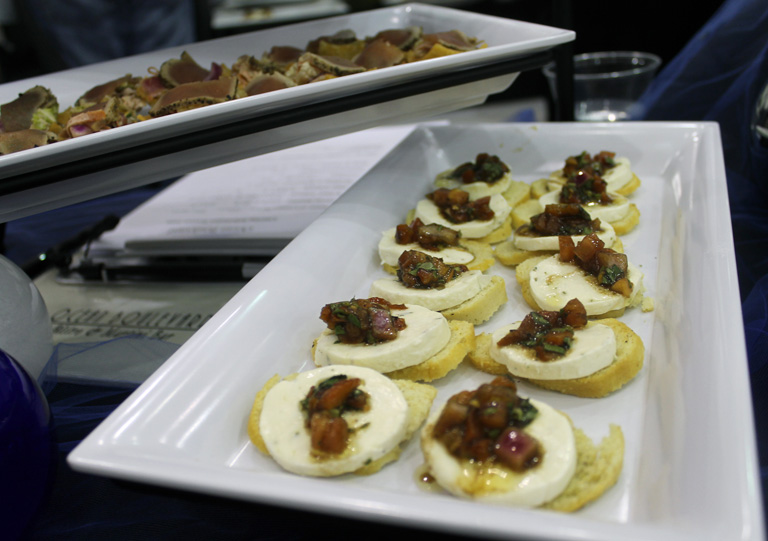 Ahi tuna (back) and mozzeralla with tomato salad on french bread for Ocean Boulevard.

The Outer Banks has become one of the most popular wedding destinations in the United States. In the process it has become an increasingly important part of the economic health of the local economy—and the size and scope of that Outer Banks picture was on full display this weekend.

Although final attendance figures have not yet been tabulated, based on online sales and past trends, there were probably around 1100 couples seeing what the Outer Banks has to offer. If that is the case, the 2013 Wedding Expo would be the best attended by a considerable margin.

Held over two days and filling the gyms of First Flight High School and First Flight Middle Scholl, it was also the best organized and best run show in a number of years. A new slate of board of directors was elected this past year and the effect has been dramatic. “This board is phenomenal,” Kerri Catino-Nason of Proper Setting said. “They have really listened to what membership had to say.”

There are a number of factors that have gone into the success of the wedding industry on the Outer Banks. Certainly its physical beauty is important, its proximity to major metropolitan areas is significant; the Outer Banks Visitor’s Bureau recognized early on that there was tremendous potential for weddings and worked with the Outer Banks Wedding Association (OBWA) to get the word out.

None of that would have mattered, though, if the people involved in planning weddings, in floral design and catering—if all those people didn’t truly and genuinely care about the couple getting married.

Ryan and Sarah are from Williamsburg and are planning on getting married in late summer or early fall of next year. “We want to get married on the beach,” Sarah explained. “We wanted to talk to the people who were going to marry us. What are they, the officiants?” she went on to say. “You can email or go online versus a personal touch. It’s nice to have the personal touch.”

There were a number of door prizes and giveaways capped by a $100,000 dream wedding planned by Catino-Nason. The winning couple, Lauren Fenner and Timothy Clayburn, Jr. of Manassas, had just lost the bride’s mother last year, and had delayed getting married.

According to Catino-Nason, they seem like the ideal couple to have been selected. “They were just so thankful,” she said. “It’s really nice that someone who would really appreciate what this means has one it.”