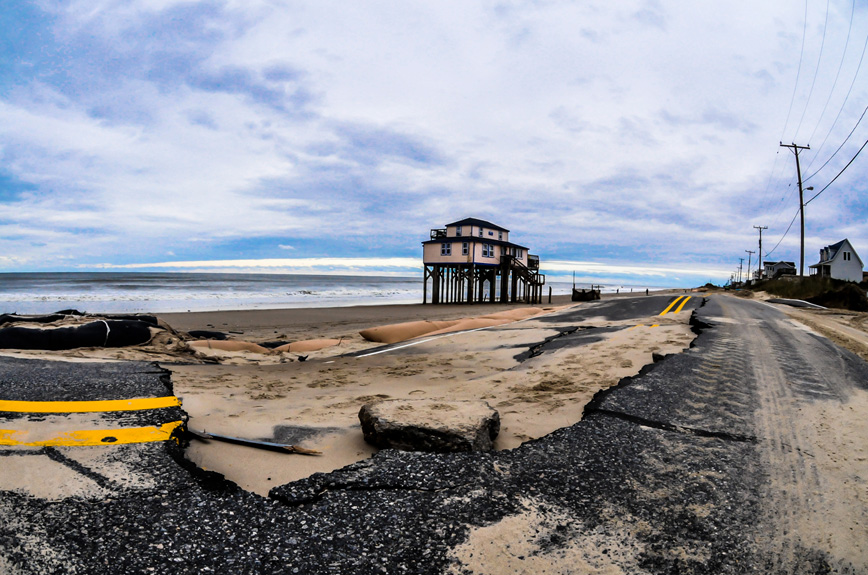 Monday morning, October 29th, started with a call from Cathy Baldwin, publisher of the North Beach Sun, asking me to get to the office as soon as possible: “The tide’s coming in fast. If there’s anything in your office you want to save, you need to get here quickly.”

When I got there, our parking lot was already filled with water. I parked across the Bypass, waded through water just over my knees and got to work getting everything up as high as we could.

Forty-five minutes after we began, the outside walls started to saturate. Then, slowly at first, just a trickle but ominous in its implications, ocean water began to infiltrate the building through the rear and front doors.

By the time we left, 4” of the Atlantic Ocean covered our floors and showed no signs of stopping. The water would continue to rise most of the day, reaching a mark of around 16” inside our building.

Unlike Any Other Storm 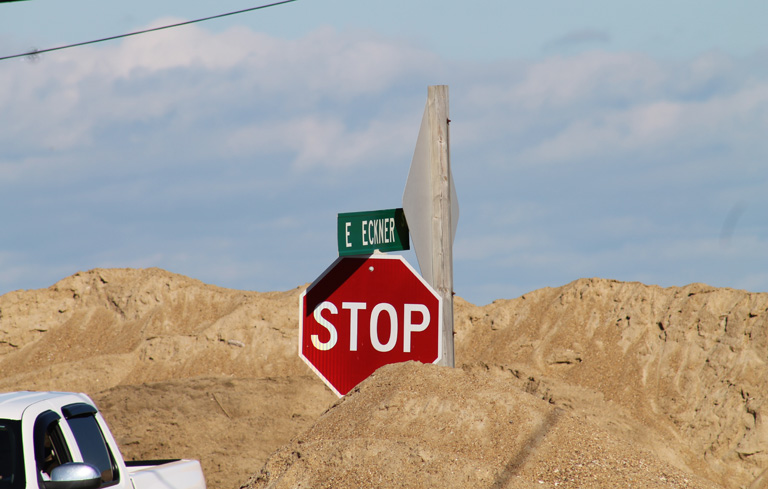 Sand piled high along the beach road during cleanup.

Sandy was not like any storm I have experienced on the Outer Banks. Like some slow moving ocean going vessel of grotesquely mammoth proportions, the hurricane passed well offshore, battering us with four days of tropical force winds and torrential rains.

It was the wake of this ocean-going vessel that held the destructive force. Think of waves spreading out from the bow of a boat and how large they are as the stern passes, then magnify that to the size of a storm that would have covered the entire eastern half of the United States had it made landfall at its largest size.

The combination of hurricane generated waves, massively low pressure and a full moon created circumstances that had never been seen before on the Outer Banks.

The Bypass (US Route 158) was completely under water from just south of the Kitty Hawk 7-11 almost to the Kill Devil Hills town line. The detour was a twisting journey through residential streets that began in a parking lot and ended at Harbour Bay Drive between Trio and Good Life Gourmet.

The world became a sodden, saltwater-soaked mess from the Hilton Garden Inn to the northern end of Kill Devil Hills. If there was a miracle or blessing, it was that no one on the Outer Banks was injured or killed by the passing of Sandy. 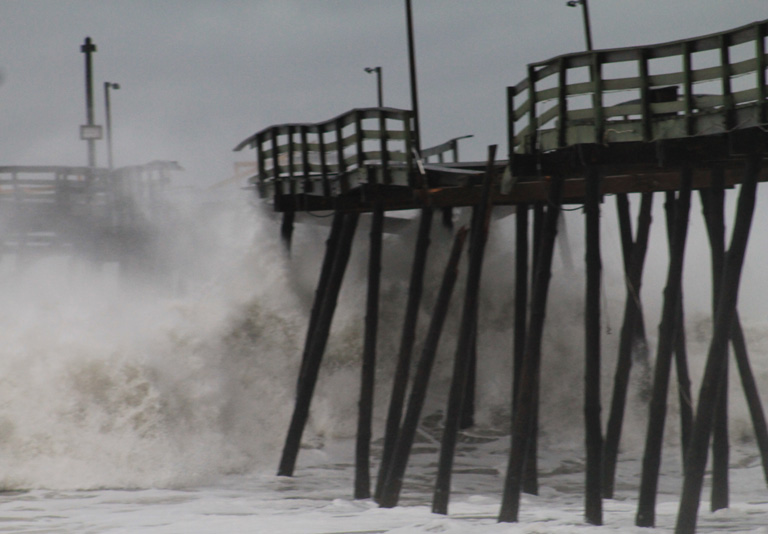 That is not to say that there was no damage.

Avalon Pier has withstood all the Atlantic Ocean has thrown its way for almost 60 years (its 60th anniversary will be in March), but the force of Sandy severed the pier in two places, leaving a stub of a pier—a stub that was still far enough out to land speckled trout the following week.

Twenty or 25 yards north of the Black Pelican in Kitty Hawk, the dune line stopped abruptly, as though an ocean-going skill saw had severed the dune. For the next 200 yards there was nothing left but a flat open beach and chunks of asphalt pointing to the sky at odd angles.

Standing almost at the halfway point of the devastated roadway in Kitty Hawk, Pelican Perch is the last of a row of cottages that once lined the beach along that strip of shoreline. With pilings pounded far into the ground, it has become an icon of the Kitty Hawk beach. Never, however, has it been so exposed to the forces of the sea.

The ocean scoured the sand from beneath the house, exposing the septic system and an additional four or five feet of the pilings. Although the house appears to have survived Mother Nature’s fury, it is still not clear if it will survive the permitting process.

The septic tank appears to be intact, but all the lines connecting it to the house will have to be replaced. “The tank is still there,” Jack Flythe, Environmental Health Supervisor for Dare County, says. “But they’ll have to submit a permit application for the repairs. They’ll also have to get a CAMA permit.”

South Nags Head, with a history of severe damage from major storms, suffered no significant structural damage to buildings or infrastructure. “We had a $93 repair at a beach access,” Mayor Oakes says. “After Isabel, we had $400,000. The energy got beat out of the waves by the beach.”

There were other significant differences between the impact of the storm in both Nags Head and Kill Devil Hills and Kitty Hawk.

Both Nags Head and Kill Devil Hills use pumping systems to an ocean outfall. “They don’t get used a lot,” Oakes says. “Only when there’s a lot of water coming in.”

Kitty Hawk has never installed a similar system, and the North Carolina Department of Transportation (NCDOT) had to bring in pumps to bring water levels down. There are significant concerns about the environmental impacts of the outfalls; however, there are legitimate questions to be asked about what the environmental impact is of standing water contaminated by the accumulated oils of roadbeds and compromised septic systems.

Getting the road back to normal in Kitty Hawk will take some extra time. “We have to rebuild the dunes,” explains Jerry Jennings, Division One Engineer for NCDOT. “They’re also going to have to rebuild that roadbed. It’s going to take a couple of weeks.”

Yet there was life in the Beach Road businesses. Winks, a Kitty Hawk institution, never closed not even as the waves were crashing at their doorstep. Donnie King, owner of Ocean Boulevard, got everything he could off the floor and knew what had to be done to be ready for the overwash.

“We were able to reopen so quickly because of prior preparedness,” King says. “We spent $300 to prepare and probably saved $30,000 in inventory.”

On Thursday there was still standing water in his parking lot and on the road. Friday evening he was open. It was a touch of normalcy and a symbol of the resilience of the Outer Banks community.