With new energy, a creative vision and proven musical talent, the Outer Banks Jubilee is taking over the old Outer Banks Showcase in Kitty Hawk. 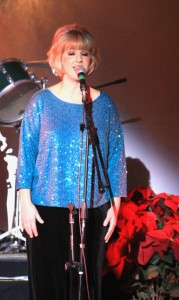 She got her start in show business performing at the old Outer Banks Showcase and when Bennett heard the building was available she called Ronnie Swaim, acoustic guitar player for Drifting Sands, and asked if he wanted to revive live music at the old Showcase venue.

The result is Christmas Times a Comin’!, a musical revue with a couple of comedy skits from Pastor Ronnie Wyatt thrown in to keep things moving.

“We have awesome musicians,” AnLouise says. The sound they produce is a little bit country, a little bluegrass with very traditional Christmas harmonies. The spectrum of songs ranges from some of the earliest carols to modern songs that have become a part of our holiday tradition.

Christmas Times a Comin’! is the first of a number of planned shows at the Outer Banks Jubilee. The cast is already in rehearsal for the New Year’s Eve show and Bennett has plans beyond that. “I know you have to keep things going in the off season,” she says. “Having a variety of shows is the biggest thing to being successful here.”

Although there are no firm dates yet, future plans call for offering a wide variety of music, magic shows and having the theatre available for theatre troupes and local talent.

“I want to appeal to a wide range of audiences,” AnLouise says. “I want to have something you can bring your five year old to and have a good wholesome night of local talent.”

The Outer Banks Jubilee can be reached at 252.261.7464 or online at www.outerbanksjubilee.com.