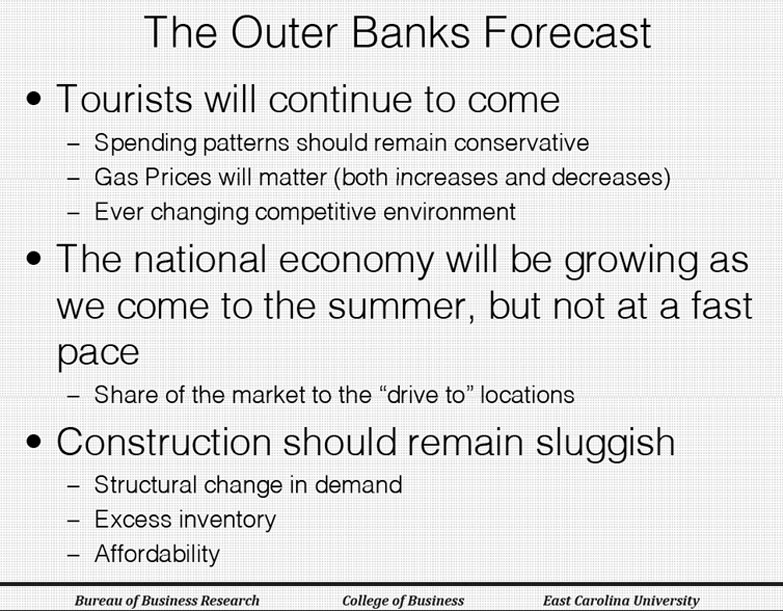 Speaking at the annual economic forecast breakfast at the Hilton Garden Inn in Kitty Hawk, cautious optimism and modest growth are the prediction for the economic future of the Outer Banks, according to Dr. James Kleckley.

Dr. Kleckley is the Director of the Bureau of Business Research at East Carolina University and the President-Elect of the Association for University Business and Economic Research, and his expertise is sought on both a national and local level. Sponsored by the Outer Banks Chamber of Commerce, he has been coming to the Outer Banks for the past six or seven years to present his economic forecast for the region—and for the most part, he has been remarkably accurate.

According to Dr. Kleckley, growth–sustainable growth–has returned to the Outer Banks. Nothing spectacular. It would appear that the local economies, powered by the strength of the tourism industry, are poised to expand at around 4-5% this coming year.

That may lead to a healthier environment in the long run. In a side conversation after the presentation, Dr. Kleckley noted that the overheated growth in the first part of the decade, was unsustainable and not considered healthy.

The region took its share of hits during the recession, and the three counties that comprise the Outer Banks held their own, although Hyde County, primarily rural except for Ocracoke, did not fare as well. Going forward Dr. Kleckley pointed to a number of factors that will continue to support a strong tourist industry. 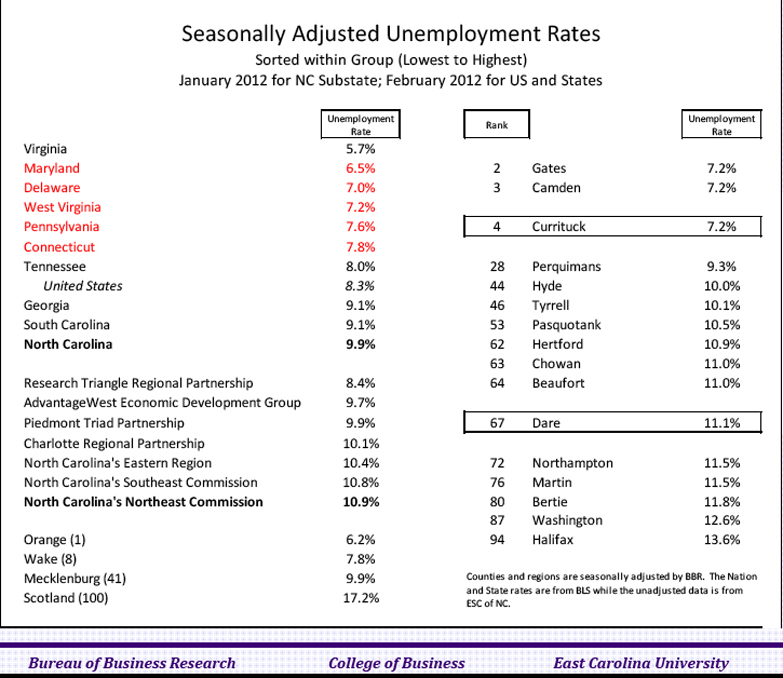 Unemployment in North Carolina has hovered around 10% for some time and the Dare County figure has remained above 11% throughout the winter. However, the regions and states that are the Outer Banks’ most important markets have some of the lowest unemployment rates in the nation. Maryland, Delaware, West Virginia and Pennsylvania all have unemployment rates below 8%, significantly lower than the national average of 8.2%. Virginia, with the eighth lowest rate in the country at 5.7%, is the primary market for the region, and that figure is skewed by the extraordinarily low unemployment in the Washington, D.C. area.

There are other factors that have played into this. Rising fuel costs are certainly a part of the discussion. Fuel costs disproportionally effect long distance travel over a drive-to location. As an example, if every member of a family of four is hit with a $150 fuel surcharge to fly to Cancun, the extra $100 or $125 it costs to drive from Philadelphia makes the Outer Banks a much more attractive destination. 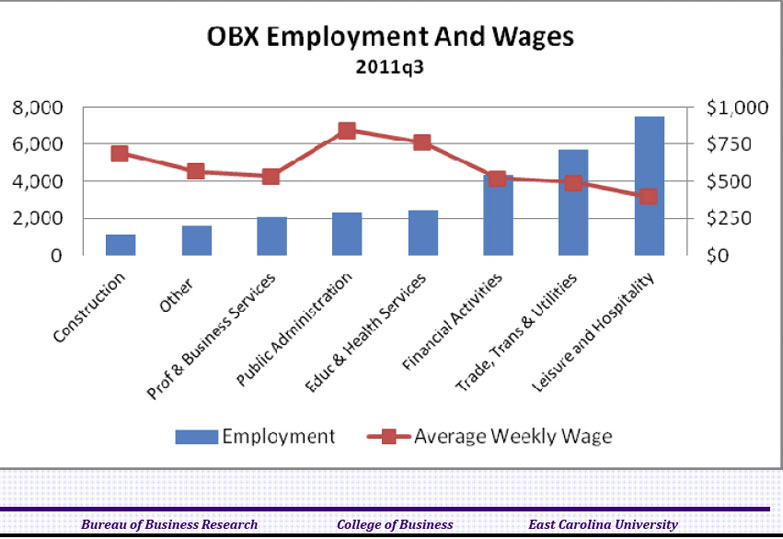 Weekly earnings by industry on the Outer Banks. Image courtesy of Dr. James Kleckley, Bureau of Business Research at ECU

It was not a completely rosy picture that Dr. Kleckley painted, however. Although Currituck County has maintained a relatively low unemployment rate, the unemployment rate in Dare County remains unacceptably high. And, perhaps even more troubling–some of the best paying professions have lost employment and personnel over the past four years. At this point in time, the leisure and hospitality industry is the largest employer on the Outer Banks and average weekly earnings of employees in that industry are the lowest of all segments.

The housing market has begun the road to recovery, but it is a long road back, and the national, regional and local statistics Dr. Kleckley presented, made that clear. Finally, the Outer Banks economy is very much impacted by both national and international events. Turmoil in the Mideast or the European debt crisis are far beyond the influence of local policy makers, yet difficulties in those areas could have a dramatic effect on the what happens here.

Nonetheless, even with the cautionary notes, Dr. Kleckley’s message was the most positive we have heard in the past three or four years.

The began with a discussion of the annual operating data from a sample selection of Outer Banks businesses. Presented by Hutchins Allen & Company, the data, collected through 2010 showed local businesses holding their own, although growth was marginal at best. The 2011 surveys will be sent to Outer Banks businesses after April 15.