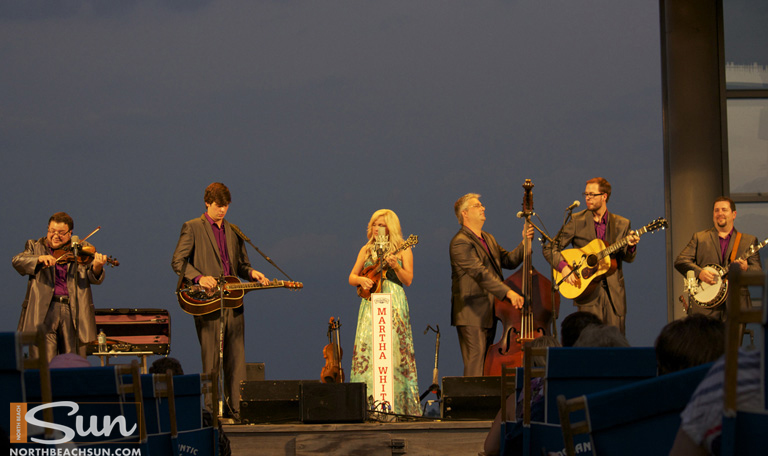 Columbus Day Weekend has come and gone on the Outer Banks, and the 2012 version wasn’t like any other that I have experienced in the almost 20 years I have lived here. It seems as though the Outer Banks as a welcoming place to visit is truly beginning to understand the potential we have even in the shoulder seasons—more events are being scheduled, more visitors are coming and our community is certainly benefiting.

There were three major events this weekend and by any measurement they were very successful. 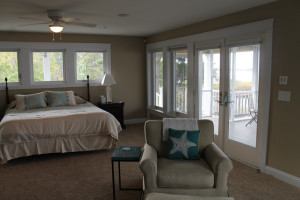 The 20th Annual Outer Banks Parade of Homes was held Thursday through Sunday and all indications are this year’s event was the most successful in years.

One of the most notable features of the music festivals this weekend was how universal their appeal was. It is reassuring and rejuvenating to the human spirit to see two or three thousand people in attendance, knowing these are family gatherings in the truest sense. Generations of families are at these events—children, parents, grandparents.

Then there is Gladys Smith, 100 years old, who was at the Duck Jazz Festival with her daughter and granddaughter. It would be difficult to think of a better tribute to the universal message of music. 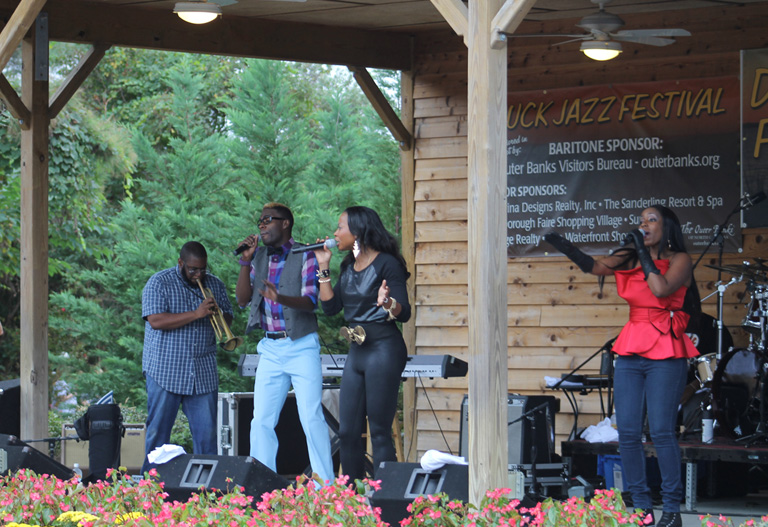 If there is a better venue than the Duck Town Green for an intimate daylong jazz festival, I can’t imagine what it would be. It’s just perfect—everyone gets to spread out on the grass, there is a little bit of a rise separating the road from the green, and that rise keeps some of the traffic sound out and most of the music in. There’s greenery everywhere and Currituck Sound is at the end of the gravel path.

Emme St. James and Her Jazz Gentlemen kicked things off and what a wonderful sound. Featuring the music of the 30s, 40s and 50, St. James voice is ideal for the role—a little bit sultry yet strong, she really gives the feeling of a swing-era band performance.

The Fuzz Band followed, and I have to confess I have been a fan of theirs for year. I wrote about them a number of years ago (at least five or six, maybe more) for Hampton Roads Magazine when they were first coming on to the club scene. I thought then and I still think they are one of the most high energy, innovative bands I have seen.

A cold front passed through early in their performance—a little bit of wind, some rain, it got colder and it chased some folks away, but it didn’t even stop the Fuzz Band for one moment . . . the energy kept going, the beat kept going and they kept pounding out their songs.

Although they do funk with a driving beat amazingly well, they are a group of very, very talented musicians that are not afraid to take on different formats. As an example, half way through the performance, they did a version of the Beatles’ Blackbird that was lyrical and beautiful.

The weather calmed down pretty nicely for Paula Atherton. A gifted and creative vocalist, she can hold her own with anyone on both saxophone and flute.

The group with her were as good as any ensemble I’ve heard. I didn’t write the names of the musicians down and I wish I had. In particular, her lead guitarist and husband plays a hot, screeching lead that is guaranteed to get right inside you and grab and hold your attention.

The headliner for the day was Russ Freeman and The Rippingtons, and they did not disappoint. The group is 25 years old, and although their music fresh and innovative, the confidence that comes from knowing what each musician is going to do, has created a tightly woven, yet explosive experience.

The music starts as a deceptively soft jazz, then—almost without realizing it, everything changes in the music. There’s more movement, more complexity; Jeff Kashiwa is wailing on sax, Russ Freeman is laying down a scorching lead guitar and half the crowd is up on their feet dancing.

In so many ways, it seems to epitomize what the day was about, and gives a real sense of anticipation for the 7th Annual Duck Jazz Festival. 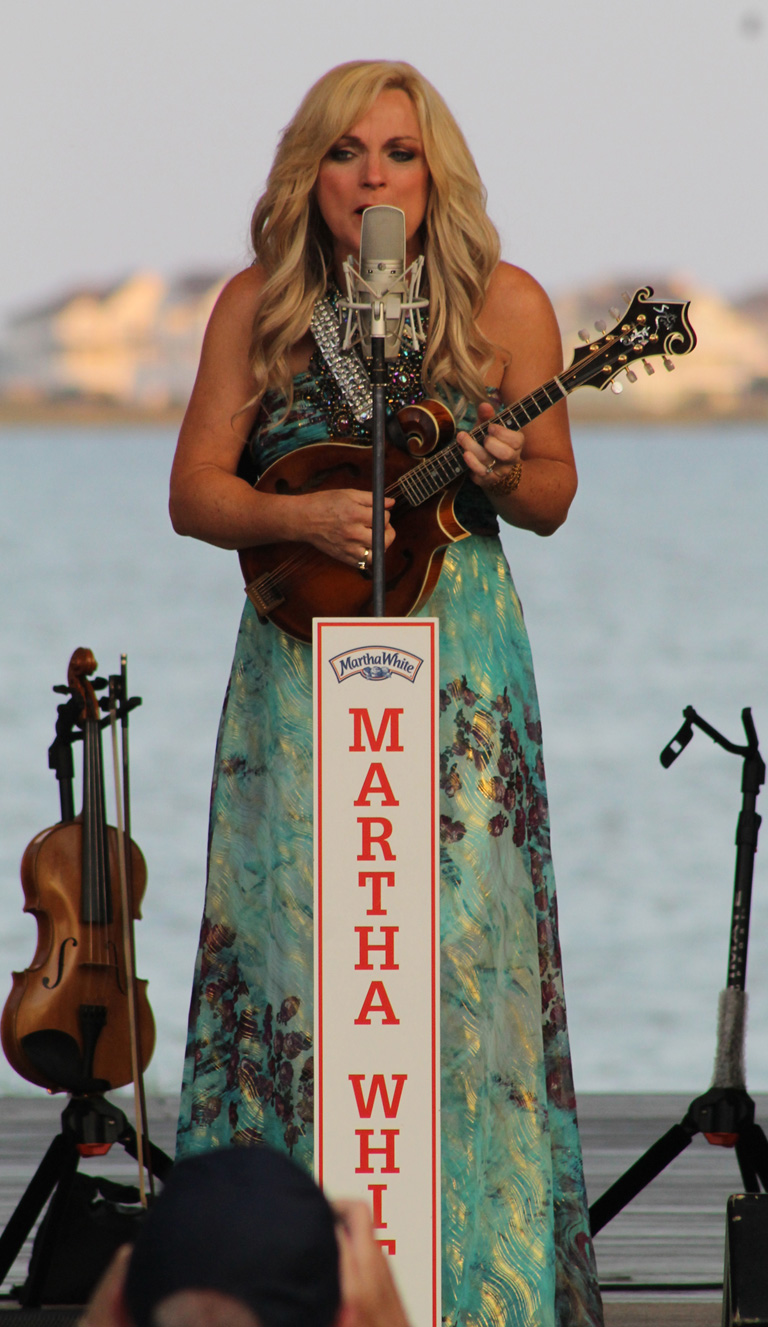 I’m going to rerun the quick review I wrote on Friday’s performances and then add a few remarks about Rhonda Vincent and the Rage, the Saturday headliner.

Rhonda Vincent and the Rage

This is pure bluegrass music, and it would be hard to imagine any group or any performer doing it better.

Rhonda Vincent has been performing for years and she definitely knows how to work a crowd, but the reason she has remained one of the top draws in bluegrass is because of her talent, which is immense. Her voice is clear, lyrical and beautiful and gives substance to a form of music that is too often presented as simple and one dimensional.

She is also an amazing mandolin player, laying down some pretty complex rhythm patterns to back up the group’s vocals And, when some lead or solo work is needed, she is precise and innovative in what she is doing. Beautiful mandolin playing.

As good as she may be, the Rage matches her step for step. These are some of the most incredibly talented musicians I have ever seen.

Then there is Aaron McDaris on banjo. As an example of how versatile and melodic (melodic is not something usually associated with a banjo) a banjo can be, his version of America the Beautiful filled me with pride and joy for this country.

All and all an amazing evening of music.